10 things to bid on at Neptune’s fundraising auction

Yes, you do need the disco ball from Mamma Mia!

You gotta feel for Neptune Theatre. Days after it announced its tepid return to live shows, the government called for another lockdown (making those shows cancelled, of course). The new premier pretty quickly called JK on the whole thing–pulling the plug on a proposed monthlong shutdown one week in–but that doesn’t give the average live venue enough time to remount a cancelled show (or even recover from the whiplash, really).

But, if you’re looking for other ways to support the biggest professional theatre company in Atlantic Canada (and really, you should be if you want to keep this anchor in our local theatre scene alive), take a look through its current fundraising auction. The online auction, hosted until March 16, is full of Neptune costumes, props and memorabilia–the total definition of hidden gems that’ll bring a bit of Halifax into your home decor.

To help warm up your credit card and get your scrolling hand ready, the following are 10 items from the auction worth placing a bid on. And you can view the whole auction here.

The disco ball from Mamma Mia!
Since the theatre’s 2018 mounting of the ABBA jukebox musical was the perfect blend of disco and spectacle–and since 2020 taught us that our living rooms make great dance floors, too–why not get your glow on thanks to this mirror ball?

Hand-drawn costume designs from Peter Pan
This 2019 show was a landmark of gender identity representation, as it saw Avery Jean Brennan taking the stage as Neptune’s first out, trans woman actor. It also signalled that Neptune’s new tradition of a holiday musical was one with staying power. Here, fashion sketches of the show’s costumes make the perfect gift for the musical/fairy tale/Disney fan in your life–even if that person is you. 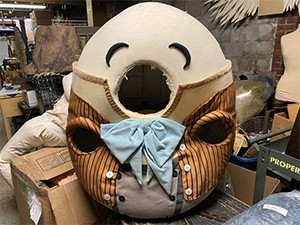 The Humpty Dumpty costume from Shrek: The Musical
You don’t need us to tell you that Shrek is the GOAT–after all, can you name another onion-loving ogre who’s won an Oscar? Rep one of the story’s best minor characters with this Humpty Dumpty costume–a unique display piece that doubles as the perfect metaphor for 2020.

The ship’s wheel from Peter Pan
Ahoy, sexy! Commit to the bit for your next TikTok sea shanty with the wheel that made Captain Hook an instant icon during this Best of Halifax Readers’ Choice Award-winning musical’s 2019 extended run.

This set of two floral handbags with gloves
Accessorize like your favourite Bridgerton character with these handbags and gloves from Neptune’s wardrobe department that deliver serious Regency-era vibes.

This taxi stand sign
A true gem from Neptune’s prop department that’s probably lived many a life onstage–and now, as a cool talking point in your living room.

A signed poster–or five
The Neptune auction is stuffed with collections of cast-signed posters and individual, dry-mounted autographed posters of single productions, from Cinderella to The Colour Purple to Elf. This particular collection of five recent plays that garnered critical praise are a jumping-off point for your perusal. Oh, and the best part? Bidding starts at six bucks.

This antique chair
A fair bit of fine furniture is buried in the online auction, but the best of ‘em might just be this beautiful, cream-coloured upholstered chair. It looks like the sort of thing an Instagram reseller would have you shelling out hundreds for–but as of publication time, the bids were still below $30.

An antique map of the Maritmes
Imagine this five-by-four-foot beauty unfurled behind your couch as the ultimate ode to the Atlantic Bubble! Your Pinterest board won’t be able to handle it.

This poster of Halifax pubs
This poster is a siren call to the halcyon days of the Halifax bar scene. Some of these venues only live in hazy memories, like JJ Rossy’s, with the $2 well shots and some of the cheapest food in town. Or Alexander’s, where “Life Is A Highway” was the soundtrack of Thursday night. And then there’s the Thirsty Duck–“The Duck”–above the old Duggers building (RIP), where the after-work crowd crowded the patio and chugged back Keith’s. Good wall art for your favourite 50-something, who grew up when mozza sticks and watery draft were the epitome of downtown dining.