After such an action-packed year of arts news big and small, narrowing 2012 down to a single list is no easy feat. 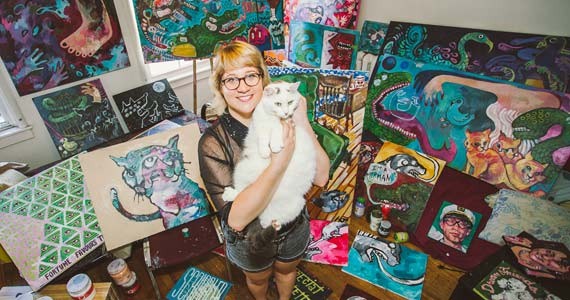 Halifax is a city buzzing with cultural energy and 2012 was a year of quirky, political and seductive art, all while powering through a serious arts funding discrepancy compared to the rest of Canada. In a word, 2012 was plucky. Here's a short list of what stood out in the arts world this year.

Emily Davidson's Agitate Educate Organise: Davidson wheat-pasted the walls of the Khyber with richly patterned wallpaper depicting images of striking workers and female labourers. Commenting on the state of arts and labourers today, Davidson's work not only agitated, it inspired.

SKIN: the seduction of surface: The Art Gallery of Nova Scotia's chief curator Sarah Fillmore chose the most alluring pieces of contemporary art from 36 artists to produce this intimate exhibit. Featuring Jana Sterbak's Vanitas: Flesh Dress for an Albino Anorectic (where 50 pounds of flank steak was sewn into a dress), SKIN's variety of mediums discussed surface in all its forms.

World Portable Gallery Convention: The Eyelevel Gallery's roving exhibit broke all the rules about how we experience art. For the month of September, art fans could call the Eyelevel hotline and request a unique artistic experience delivered directly to them via lapels, pockets, even beards.

RUBBERBANDance, Gravity of Center: Animalistic and sexually-charged, Live Art Dance brought RUBBERBANDance's Gravity of Center to lucky dance fans. A stunning soundtrack provided an intense backdrop to the shifting nucleus of the troupe, blending contemporary, ballet and hip-hop dance to tell a story of individuality and control

D'Arcy Wilson, Protect Your Love: Fact and Fiction: The Ecology Action Centre, the Khyber and Visual Arts Nova Scotia presented Wilson's work highlighting the disconnect between our lives and the natural world. Wilson's Tuck at Nocturne was a magical, sweet and deferent lullaby to animals.

Nocturne: Despite a brief funding scare, Nocturne came back loud and proud for itsfifth year, filling the streets with free public art for one special night. Gigantic ants, a human-sized spider web, a glowing collection of shortwave radios and tons more made October 13 a wonderland for art fans.

Kai Chan: A Spider's Logic: Saint Mary's University Art Gallery played host to this retrospective exhibit spanning 35 years of Chan's contemporary textile artwork. Colourful pieces made with natural materials like wood, silk, grass and cotton took on a life of their own in the gallery.

Jonestown/The Pigeon Gallery: Halloway Jones took a normal day in August and transformed it into a day-long multimedia art, music and food festival at the Bus Stop. A month later she was putting the finishing touches on brand new The Pigeon Gallery which features movies, music and art.

Jamie Q., The Possibilities are Endless: During the dreary months of November and December, the walls of Parentheses Gallery were alive with colourful graphics, playful squiggles and germ-like blobs on paintings, fabric and sculpture, coinciding with the launch of Q.'s art book.