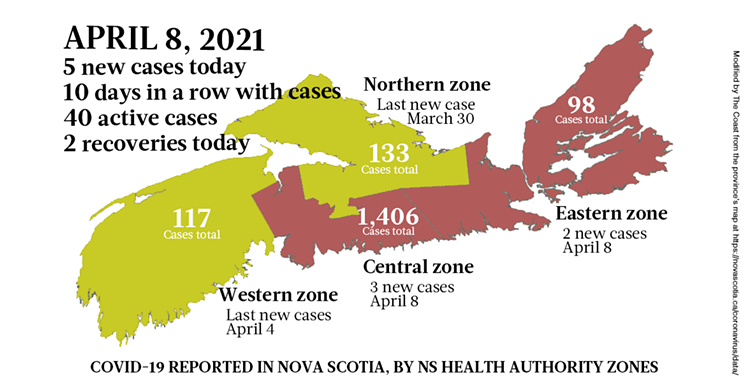 5 cases push NS to a 2021 record for case activity

The province’s latest COVID-19 numbers as of Thursday, April 8.

Nearly every day so far in April, Nova Scotia's had more new COVID-19 infections than patients recovering from the disease. There were three new cases last Thursday, for example, and only two people recovered, so the total number of active cases rose by one. Friday brought nine cases and two recoveries, sending the active case count up by seven. Tuesday it went up by five, yesterday it went up another one. And today the trend continues, pushing the caseload to a record high level for this calendar year.

The province is announcing five new cases April 8, compared with two recoveries, adding three new active cases and bringing the current total to 40 active cases. That is the most active cases Nova Scotia's had in 2021, the most since the province announced 48 active cases on December 27. Yet Strankin seems unconcerned.

“Day after day we are seeing the results of the hard work of Nova Scotians to keep the COVID-19 case numbers low,” says premier Iain Rankin in today's provincial C19 update.

“I’m pleased to see our efforts to contain the virus continue to work and our case numbers are remaining low," is the update's quote from top doc Robert Strang. "I want to thank Nova Scotians for their continued efforts to prevent the spread of COVID-19.”

Ahhhh, the spread may be the key. Even as cases mount, the province is not experiencing uncontrolled community spread of the disease. People are bringing C19 here from other parts of the country, but their risk of passing it to other people is reduced by the mandatory two-week quarantine on travellers, and contact tracing is working to nip potential outbreaks in the bud.

Today's report does include an odd situation, involving the faster-spreading B117 virus mutation. "Unrelated to the cases announced today, one new UK variant case has been identified," the report says. "The person is a Nova Scotia resident who is living and working outside of the province. This case has no known close contacts in Nova Scotia." Sounds like the latest example of an unhelpful quirk in the way cases are tallied at the national public health level, where a Nova Scotian who catches C19 while living in another province is still counted as a Nova Scotian case, even though they live somewhere else, receive medical attention somewhere else and are an infection risk somewhere else.

Nova Scotia is now considered to have had one more case of B117, for a cumulative total of 23 cases. The province is holding at 10 cases of 501V2, and no known cases of P1.

Nova Scotia's labs dealt with 2,020 local tests yesterday, a little higher than the current daily average of about 1,900 tests. One C19 patient is in hospital (still) due to their symptoms. Clinics around the province administered 6,643 doses of vaccine yesterday, considerably higher than the mark of about 4,000 daily doses the province has averaged recently.

And finally, due to some inexplicable data anomalies, our table that locates new cases inside the province's four large health zones is not available today. But with luck it will be back for tomorrow's Coast C19 case report, located in its usual spot below this post.