classical voice training and a pinch of awkwardness 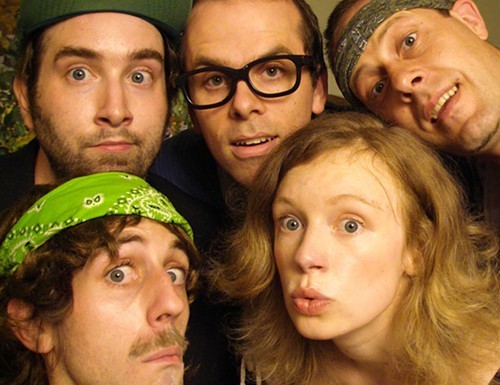 Delightful local musician/comedienne Ann Denny/Anna Danova makes the leap to the Plutonium Playhouse starting tomorrow with her band, the Rescuers, in the Fringe show Emotional Condom. The show features Danova's original music (including the title song.)

We asked her a bunch of questions about it, and she graciously replied between rehearsals via email.

What inspired you to do a Fringe show?

I feel that my zany on-stage character is fully at home in the open/experimental Fringe atmosphere. Also, my Mom writes Jane Austen adaptations for the stage that have won Best of Fringe in London, Ontario, so you could say it runs in my blood.

If you could choose any musical that defines your essence, what would it be?

Well, I'm gonna throw this out to some of the Rescuers:

However, this Emotional Condom show is not strictly speaking a capital-M “musical”. It's more ‘music-that-happens-in-the-context-of-a-theatre-show-with-some-dialogue-in-between-and-snippets-of-plotline’. I know that sounds a lot like a musical, but it is somehow different. It's more of a collection of strong characters, driving a partly-improvised environment, sprinkled with songs that would stand-alone as multi-genre pop songs in a music concert. Think more "Flight of the Conchords" or "Jem and the Holograms".

My dad always used to say "in every joke there's a nugget of truth" and while your songs are very funny, there's definitely a lot of truth in them - I am thinking of "Conditions of Love" for example. How much "truth" can one hear in an average Anna Danova song?

I am probably the most sincerely ironic person that you could meet. I learned long ago that just being honest about my impressions of life is quite absurd enough.

But Matt suggested that I write up the recipe. So, here are the ingredients:

- A pinch of awkwardness

- A sprinkle of extreme high-sensitivity to one's surroundings

Mix these things together and allow to simmer for several years in a bowl of rich artistic and musical context out here on the East Coast- et voila!

And, if singing about serious things like stalking in a classical voice whilst making faces can help to start a dialogue about what is frankly a sign of overall social malaise, then so much the better!


The last time you spoke to us at the Coast, you said it was hard to find people to collaborate with. How did you come across these gentlemen in the Rescuers? Do you love them?

Well, the plaintive seed in that last Coast interview has born bounteous fruit, and I thank daily the fertile shores of Cape Breton for spawning three of my troupe! (Noel Taussig, Matthew Mcnamara and Jarrett Sampson). Ryan Veltmeyer is an out-and-out Haligonian, so he gives us the hometown cred. I met him through his brother Nick Veltmeyer (an amazing piano/organ player you will soon be hearing about.) Also, big shout-out to Gerry’s Comedy Lounge at Gus' Pub. Those Mondays nights are a solid networking scene.

And yes, I love them all.. platonically.

When/if you become a touring rock goddess, what will you have in your rider?

I already get gently razzed by friends for regularly traveling with my own water filtration device, and my own bed linens washed in eco-detergents.

But I don't think I’ll need a completely white room like J-Lo. I'm more into pink.

Emotional Condom runs from Friday September 3 to Sunday September 12 at the Plutonium Playhouse. You can view all dates at the show's Facebook page View Youtube videos of Ann's past performances here.