5 summer races to sweat about

Swap your sandals for your sneaks and pound the pavement/grass/ocean floor to the finish line.

By Allison Saunders and Morgan Mullin 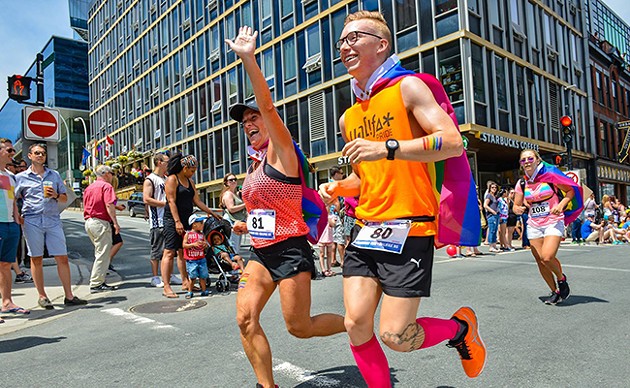 Stoo Metz via North End Runners
The Rainbow Pride Run takes place July 21
June 29-July 1
Epic Canadian
Epic Dartmouth triathlon has transformed into Epic Canadian, a weekend packed with races that coincides with the country’s birthday. This year check out five distances over three days (and one night), making the event super accessible for marathoners and amateurs alike. Run once, or daily if you’re that kind of keener. And if you’re not going to be in Dartmouth over the long weekend, you can still partake. Sign up for a satellite run!
Graham’s Cove, Dartmouth, $49-$154, epiccanadian.ca

OUT OF TOWN
July 6-8
Antigonish Highland Games
There’s a lot more than highland flings to get your heart rate up every summer in Antigonish, the Highland Games boast what’s possibly the most intense selection of things at a summer festival. Various road races (of the running and biking variety) are punctuated by of wars, farmers’ walk (AKA lifting a really heavy thing, quickly) and Scottish heavy events (more lifting and throwing of heavy things) like caber toss, hammer throw and weight for height.
Antigonish, antigonishhighlandgames.ca

OUT OF TOWN
July 15
Not Since Moses
Not since Moses parted the Red Sea have rushed across the ocean floor—or at least, that’s the idea behind the name of this Bay of Fundy cardio session that sees runners sprint across the slick, reddish mud before the world’s highest tides come crashing in. It’s possibly the provinces most beautiful race backdrop. Once-in-a-lifetime memories will be made as sneakers will be forever ruined.
Five Islands, $60, notsincemoses.com

July 21
Rainbow Pride Run
As if you needed an excuse to break out the neon spandex, but here we are. Get a good warm-up for the Pride parade with this fabulous five kilometre run from Halifax Pride and the North End Runners. The course starts at Bell Road and South and loops the parade route, finishing at the Garrison Grounds. Just think of yourself as the opening act.
Garrison Grounds, 5425 Sackville Street, , raceroster.com

Morgan is the Arts & Entertainment Editor at The Coast, where she writes about everything from what to see and do around Halifax to profiles of the city’s creative class to larger cultural pieces. She’s been with The Coast since 2016, when she began as the publication’s Listings Editor, working her way up to her...
More