Plan your live music playlist with festivals, big ticket shows and smaller music events and get a good mix going. 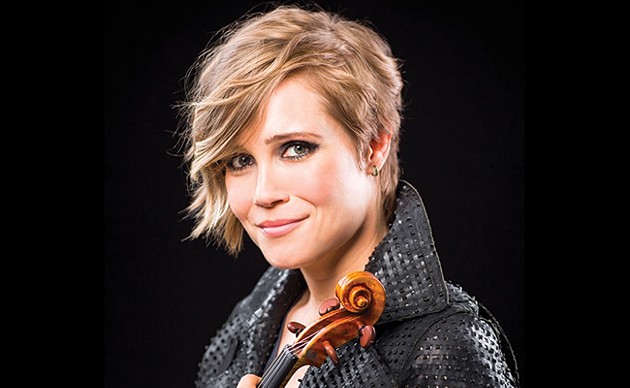 Hollerado
Hollerado loves its fans. So much so that the blues-funk-rock getup's 2015 effort, 111 Songs, was a project where they wrote custom songs for specific fans (no, really). They just wanna love you, damnit, and this dance-y show will make feelings downright mutual.
The Seahorse Tavern, 2037 Gottingen Street, Thu., Sept. 14, 9 p.m., $15

Brian Wilson Presents Pet Sounds: The Final Performance Wouldn't it be nice to see the king of surf-rock say so long to his band's most iconic album with what's sure to be an equally-iconic performance? Start saving for this big ticket now, kids, while you're waiting for the day. Scotiabank Centre, 5284 Duke Street, $99-$144.50, Sat Sep 16

Bruce Cockburn Lovers in this dangerous time will no doubt want to witness the Canadian singer-songwriter belt out his ballads that veer from rock to folk. Rebecca Cohn Auditorium, 6101 University Avenue, Sat Sep 16, 7:30pm

Figure Walking w/Horses
Figure Walking are so green to the scene the duo's debut dropped mere months ago—but that didn't stop the effort, The Big Other, from landing on the 2017 Polaris Music Prize long list. Get lost in their sonic house built on dance beats and electric guitars (described as "jagged art house post-punk" by the band) at this show.
Art Bar + Projects, 1873 Granville Street, Sat., Sept. 16

Psallentes These four fair maidens, all dressed in black, will sweep you back in time with their magic voices and world-famous plainchant performance. Need proof? Check out one of the over 25 recordings the Belgian medieval vocalists have dropped since 2000. St. Mary’s Basilica, 1508 Barrington Street, $30, Sat Sep 23, 8pm

Every Time I Die w/Knocked Loose, Hollow Earth New York metal core titan Every Time I Die has been shredding guitars and melting faces since the early 2000s, when the genre-revatlising Hot Damn! dropped like fire on our ears. Catch them at The Marquee for and #tbt it to your angsty younger self. The Marquee, 2037 Gottingen Street, $25/$30, Fri Sep 29, 9pm-2am

Matt Andersen
Be prepared to be amazed by blues legend Matt Andersen as he combines his powerful sound and commanding stage presence with bold, new arrangements in this electrifying Symphony Nova Scotia collaboration. Fri., Sept. 29, 7:30 p.m. and Sat., Sept. 30, 7:30 p.m.

Quartet for the End of Time
Inner Space concerts, the sweet shows that bring classical concerts to private living rooms—creating an experience both sweeping and intimate—kicks off its season with what is perhaps it's most ambitious effort yet: Messiaen’s Quartet for the End of Time. As Inner Space describes the show, "Quartet for the End of Time has deeply moved audiences since its 1941 premiere outdoors, in the rain, to 400 fellow prisoners in a German prison camp. Despite the decrepit instruments and grim circumstances, the audience was enraptured."
As with all Inner Space shows, exact ticket location will be revealed at time of purchase. Tue., Oct. 3, 7:30 p.m., $20-$43

A Tribute to Elvis w/Chris Connor and Pete Paquette Get all shook up with this serving of jailhouse rock—and don't forget to wear your blue suede shoes. Rebecca Cohn Auditorium, 6101 University Avenue, $49-$55, Wed Oct 4, 7:30pm

The High Kings This four piece sees the next generation of the Irish balladeer tradition come to foot-stomping life. Catch the Celtic vibes as it celebrates the 2016 effort Grace & Glory with this show. Rebecca Cohn Auditorium, 6101 University Avenue, $44-$55, Sat Oct 7, 7:30pm

AFTER FUNK w/My Son The Hurricane, Stephen Lewis and the Big Band of Fun, RaSquatch
If the end of festival season has you feelin' blue and lonesome, get yourself to Oasis for this sonic sunbeam that features Toronto funk outfit AFTER FUNK and 14-piece brasshop funk beast My Son The Hurricane. Early bird tickets are already sold out, so get on it!
Oasis Pub & Eatery, 5661 Spring Garden Road, Sat., Oct. 14, 8 p.m.

Halifax Pop Explosion Music Festival & Conference
The biggest ticket of Halifax's fall music schedule is back again for its 25th year. With over dozens of artists, comedians and speakers across 15 venues, this festival will have the whole city popping off.  halifaxpopexplosion.com, Oct. 18-21

Bill & Joel Plaskett: Re-Jigged Festival Gala Concert If the family that plays together stays together, your hungry ears might get lucky and this father-son partnership will stick around! In the meantime, book it to the modern-tractional Celtic festival Rejigged to catch the acoustic guitar toting duo and bask in the warm-fuzzy vibes. Christ Church Hall, 61 Dundas Street, Dartmouth, $30, Sat Oct 21, 7-10pm

Symphony Meets Bhangra The sunshine-bringing internet sensation that is the Maritime Bhangra Group shares its infectious glow as it teams up with Symphony Nova Scotia for a can't-stay-in-your-seat show. Canadian Museum of Immigration at Pier 21, 1055 Marginal Road, free, Sun Oct 22, 1:30 and 3pm

Blackie & The Rodeo Kings What started off as a one-off tribute album to the great Canadian songwriter Willie P. Bennett has since spawned into the massive Blackie & The Rodeo Kings: Three friends, eight albums, one JUNO and two decades of rockin' all adds up to one big ticket, ya hear? Rebecca Cohn Auditorium, 6101 University Avenue, Thu Nov 2

The Fabulously Rich: A Tragically Hip tribute
Blow at high dough and feel ahead by a century as this collection of musicians raise funds for the Downie Wenjack Fund with a bunch of Hip hits.
The Seahorse Tavern, 2037 Gottingen Street, Fri., Nov. 3

PIGS: Canada's Pink Floyd Arguably Canada's most dedicated Pink Floyd cover band, PIGS has been zig-zagging the country—and the dark side of the moon—since 2008. Tuck into long, psychedelic jams and impassioned renditions of emotional material as you bask in the throwback feels of the whole thing. The Marquee, 2037 Gottingen Street, $25, Sat Nov 4, 8pm

The Mavericks Founded in 1989 in Miami, the Mavericks are a sonic blender of country, latin and rockabilly. Case in point? Their (arguably) biggest hit "All You Ever Do Is Bring Me Down". Back in action after a 2012 reunion, the group shares a blend of new songs and old favourites. Casino Nova Scotia, 1983 Upper Water Street, $65/$75, Wed Nov 8

Peter & Patty in concert
After 25 years of musical collaboration, flautist Patricia Creighton and pianist Peter Allen share a sort of greatest hits at this show—including the Dutilleux Sonatine. We recommend adding a classical cover of "You've Got A Friend In Me," too, for some on-vibe fun.
Music Room, 6181 Lady Hammond Road, Wed., Nov. 15, 7 p.m.

Espacées
Before his death, Edgar Varèse began planning a work that would tour the audience through a variety of spaces, soundscapes, and moods. Although the work was never completed, the idea has persisted that music and sound can happen in simultaneous space and time. Espacées builds on Varèse's foundation: The show features a new commission by James Ervin (trumpeter and performer with Walk off the Earth), spoken word by El Jones and music by Philip Glass that's experienced while the audience travels through different rooms.
Waegwoltic Club, 6549 Coburg Street, Thu., Nov. 16, 7:30 p.m.

Walrus Album Release Show w/Like a Motorcycle, WHOOP-Szo, No Problem
The Halifax psych-rock outfit that's all about going its own way (and making quality tunes in the process) comes home to celebrate the release of its long-awaited LP Family Hangover.
The Marquee Ballroom, 2037 Gottingen Street, Fri., Nov. 24, 10 p.m., $7-$11.10

Wannabe: A Spice Girls Tribute Yo, I tell you what I want, what I really, really want: To rock Scary Spice buns and dance all night to the sweet bubblegum of the greatest gift to '90s AM radio. The Marquee, 2037 Gottingen Street, $21.99, Sat Nov 25, 8pm