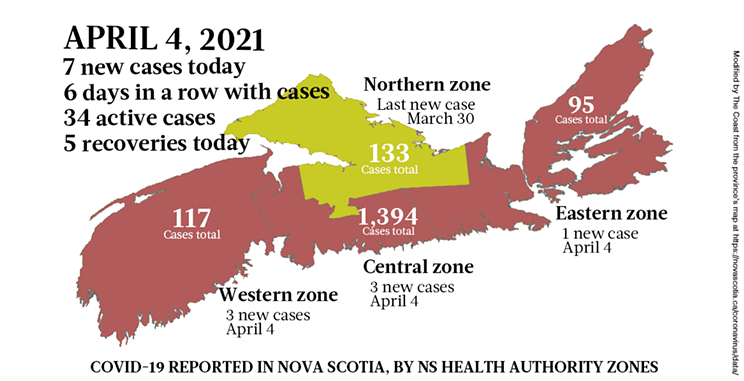 For the fourth day in a row, Nova Scotia is reporting more fresh infections than patients recovering, adding a hint of dread to the gloomy Sunday weather and making the holiday long weekend feel like it's dragging on even longer. There are seven new cases in the province, across three health zones, compared to five cases safely closed, for a total of 34 active cases spread out in all four Nova Scotian health zones. But only one COVID-19 patient is in the hospital.

Three of today's seven cases are in the Central zone. "Two are related to travel outside of Atlantic Canada," says the province's daily C19 update. "The other is a close contact of a previously reported case."

The Western zone also has three new cases, all of them in the Lunenburg community network according to our chart below that analyses location data. The province says each patient is a contact of a previous patient.

The seventh case is "in Eastern Zone related to travel outside of Atlantic Canada" according to the provincial report. Our table locates the patient as living in the Sydney health network

And while vaccine numbers aren't communicated on weekends, there is a new C19 testing number today: local labs completed 1,579 tests of Nova Scotian samples yesterday. This is about half of the current daily average, suggesting people have better things to do on a holiday Saturday than get swabs stuck up their noses.

Premier Iain Rankin can understand the feeling. "On a weekend when many of us are spending time with family and friends, let's reflect on what this period of time was like last year," he says in today's report. "We have come so far, thanks to the commitment of Nova Scotians who continue to follow the precautions to keep our province safe."

Where Nova Scotia’s COVID-19 cases are on Sunday, April 4