Feeling parched? Us too. 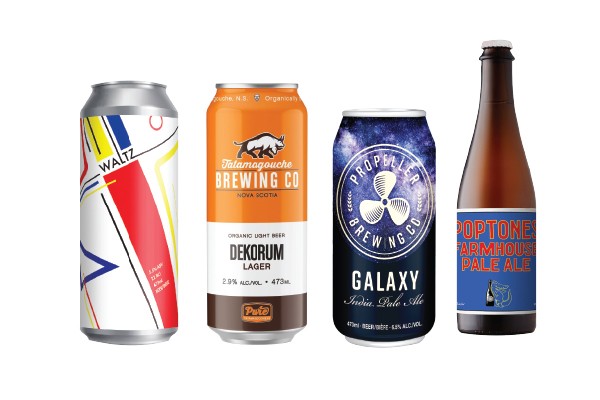 Tidehouse Brewing, Hibiscus City (hibiscus lime gose)
From Tidehouse Brewing comes this pink-hued, hibiscus- and lime zest-infused slightly sour summer sipper. Salt added during the brewing process adds a refreshing touch of salinity, backing up a bright, floral and zippy brew. Check out the Tiny Taproom to find some while checking out some cool tunes and other cool brews. Tidehouse Brewing, 2-5187 Salter Street and Bishop's Cellar

Tanner & Co. Brewing, IPA
If you ever needed a reason to get out to Chester Basin, Tanner & Co. is a pretty good one. Get yourself out to the brewery, find yourself a spot at a picnic table amongst the vines and grab yourself some of the IPA. The beer is front-loaded with bright citrus on the nose and finishes with a considerably softer bitterness than you'd usually find in an IPA. Make sure to check out the other traditionally inspired beer available on site, and look for its full-fledged taproom to open later this year. Tanner & Co. Brewing Ltd., 50 Hiltz Road, Chester Basin

Propeller Brewing Company, Galaxy (IPA)
Not going to lie, when we heard Propeller was taking a stab at a New England-style IPA, we were skeptical. Galaxy, however, manages to be everything we want in a NEIPA: Hazy, juicy, hoppy, insert buzz word here. Tons of citrus and stone fruit on the nose and palate from the Galaxy hops plus more citrus vibes from Mosaic and Citra really round this beer out. The NSLC

Breton Brewing Co., Let's Jam! (Strawberry rhubarb kettle sour)
Strawberry and rhubarb—name a more iconic pair, we'll wait. This time, the dynamic duo takes itself out of an always-favourite summer dessert and dives right into this brew from Breton Brewing. Starting with sweet strawberry and finishing with a nice tart kick from the rhubarb, this lighter bodied brew will pair well with any sunny day on a patio between now and October. The NSLC

Stillwell Brewing, Poptones (farmhouse pale ale)
One of our favorite summer beers from 2018 is back just in time. At six months from grain to glass, Poptones starts with a clean primary ferment before being hit with Stilly's house culture for a slower secondary in stainless, then is finished with some light dry-hopping. This beer deserves respect and consideration but the way it effortlessly pops along on those funky, hoppy, tart and dry tones makes crushing this refresher just too easy. Take out from Stillwell, 1672 Barrington Street

Bad Apple Brewhouse, Apearently Funky (brett pear cider)
It's quite literally all in the name: This unique bevy's funky nose invites you in, the ripe and complex pear and juicy apple notes welcome you, and fine carbonation and a fairly dry finish help you settle in. We still recommend grabbing a black currant gose while you're there, and blending one-third gose with two-thirds cider for a ripe, juicy, smoothie like concoction (and we will still accept thank-yous). Bad Apple Brewhouse, 515 Parker Condon Road, Berwick and The Core, 3 Elm Avenue, Wolfville

Tatamagouche Brewing Co., Dekorum (light lager)
The Tata Brew crew has just what you need for those times when you just want a beer that's light and crushable: Dekorum. This bright, crisp and refreshing light lager is an exceptionally sessionable 2.9 percent, making it an excellent companion while at the beach, doing yard work, or cursing out every single shot you make while on the golf course. The NSLC


Benjamin Bridge, Pet Nat
You've, at the very least, already seen this all over your Instagram, and in this case we fully buy into the hype. Our latest podcast with winemaker Jean-Benoit from BB delves further into just what a “Pet Nat” is, but here's what you need to know: This is a beer drinker’s wine. Hazy, floral, citrusy (grapefruit), super dry and now completely portable in those fucking adorable single serving cans. Keep it chill and drink it wherever you want to, in or out of the can. Available all over the place, including at the Benjamin Bridge winery while supplies last.