Our resident craft nerds reflect on the year in beer. 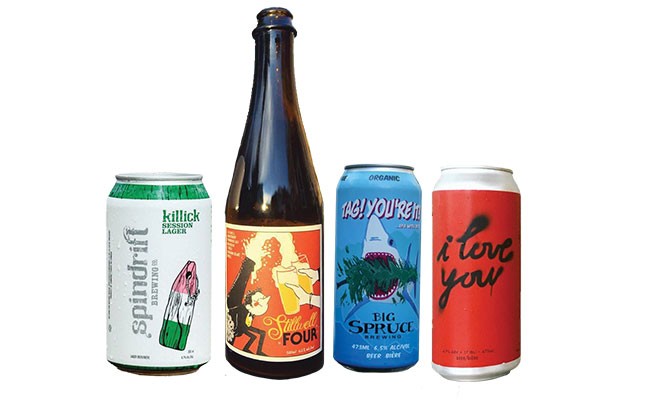 Spindrift Brewing’s Killick Session Lager
You knew this was coming. The BrewCast-proclaimed beer of the summer and a staple of every list we compiled. Refreshing, crushable and in an adorable 12oz can, this one had to be here.
BrewCast consensus

Big Spruce Brewing Co’s One Hundred
This beer takes being local very seriously. One hundred percent of the ingredients in it come from Nova Scotia, including the yeast which was harvested from a pin cherry grown on-site at the brewery in Nyanza. Dry and crisp, with a bit of spice from the rye malt on the finish.
Tony’s choice

Unfiltered Brewing’s Commissar Russian Imperial Stout
Oak-aged and fortified with Halifax Distilling Co’s J.D. Shore Black Rum, this beer is black as night and packs a punch at 11.6 percent. It’ll keep you warm all winter long if you can get your mitts on some. Kyle’s choice

Tatamagouche Brewing Co’s Guava Heist 3.6% Berliner Weisse
The first fruited version of Tata’s Berliner Weisse base was the breakfast beer of the summer. Grapefruity, juicy, lemony and sour. Perfect for hot summer outdoorsy things.
2/3 Big Spruce Brewing Co’s Complexified Barrel Aged Baltic Porter
Combining the complex malt bill of the style with six months in bourbon barrels gave this brew all the toasted coconut, vanilla and chocolate you’d want and, while it still warms you up, it has less alcohol heat compared to 2016’s.
Phil’s choice

2 Crows Brewing Co’s I Love You Brett Saison
Partially soured and then dry-hopped with Lemon Verbena from World Tea House, I Love You is a light, refreshing and tart with a little funk care of an experimental strain. Share it with someone you love.
2/3

Propeller Brewing Co’s Unfiltered Pilsner
Amongst a tap and bottle list of whales and giants, an unfiltered take on a local classic kind of stole the show and had anyone who tried it at Stillwell’s fourth birthday party collectively begging for this to be regularly available. A pilsner you can chew on.
2/3

Stillwell Brewing Co’s Four
Brewed to celebrate the fourth birthday of Halifax craft beer landmark Stillwell, Four is a dry and funky farmhouse ale aged in a single Sauvignon Blanc barrel and then bottle-conditioned. Drink fresh! (Or cellar, but don’t tell Chris we said so.)
2/3

North Brewing Co’s Reality
The folks at North tossed a complex malt bill together with Azacca, Belma and Columbus to make this topical and juicy IPA. If this beer doesn’t exist in the Berenstein Timeline, we don’t ever want to go back.
2/3

Big Spruce Brewing Co’s Tag! You’re it! IPA
Big Spruce paired up with Ocean Tracking Network for this one and we loved how it played with both the juicy and bitter sides of the style. They crafted a beer that bit and gave back, with 50 cents from each can going to OTN for research, conservation and public awareness!
2/3

About the list:
All three members of the BrewCast selected their 10 favourite local brews of 2017. The only beer to appear on all three lists was our consensus pick, Killick. Six other beers appeared on two out of three lists and then each BrewCaster picked one other to round it out.