The Queens Wharf location of The Battered Fish is as busy as can be, turning out seafood treasure chests of fishy fast food. 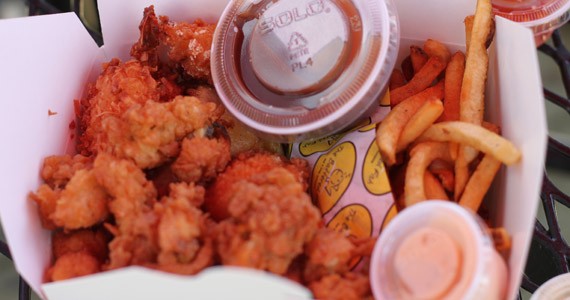 The tall ships have cast a long shadow on the waterfront. As busy as the boardwalk always tends to be in the summer, last weekend didn't just seem like the average sea of shorts, sundresses and tanktops---it was a tidal wave of tourism with locals and visitors flooding the area to take in the incredible sights.

A constant stream of people is nothing new for Queens Wharf, where a little row of huts houses a handful of takeaway joints, including The Battered Fish. Even on those days where there's nothing but your typical tourist attractions to set shutters a-flutter on the cameras and phones of passers-by, the Battered Fish is cranking out classic, fishy fast food.

Stephanie and I feel like salmon swimming upstream as we push our way through the crowd to a slow-moving serpentine that seems to take up half the wharf. In one window staff are taking orders, and at the other they're passing white boxes filled with golden nuggets---little seafood treasure chests---to grabby hands.

We decide to split a seafood sampler for one ($14.99) between the two of us. While they have other fast food options---hot dogs, chicken fingers and poutine---it's the namesake battered fish we want.

After shuffling our feet for five or six minutes, the box is handed through the window. We're offered tartar sauce, special sauce and chili sauce and take them all.

Box in hand, we try our luck with the umbrella covered tables that overlook the harbour. It's crowded. We spot a bench, and make a move just as a kid runs full tilt towards it, throwing himself onto it with the desperation of a soldier smothering a live grenade. We shrug and ask a small group to share their half-empty table. They cheerfully agree, and a few minutes later they vacate and another small group moves in to share.

We pop open the box and start with the clams. They are terrible: overcooked, drops of rubbery leather tucked into brittle batter. Worse: they are gritty. They basically taste like oil and sand, the flavour of the clam has been obliterated. Tartar and signature sauces offer a little bit of tang and a little bit of spice, but the clams are a lost cause.

Quickly, we move on to the two fat coconut shrimp. The shrimp is still tender, and the coconut batter has a nice crunch to it. It's a vast improvement over the clams, though they are a little too sweet for me; the breading seems to use sweetened coconut.

By this point we're also snacking on the french fries. Thin, hand-cut shoestrings, they are very crispy, very good. We've added gravy ($0.99), which is also delicious.

The scallops are the best part of the box. The plump little pillow shapes take to the breading exceptionally well, and the crispness plays so nicely against the tender parcels. It helps that they're perfectly cooked, still slightly translucent in the centre. Each bite is a good one. The spice of the signature sauce is especially tasty with the sweetness of the scallop.

At the bottom is a chunk of golden haddock. It's a small piece---a bigger portion of fish and fewer of the clams would have been better. The fish is very tender. It's a little bit bland, but the fillet itself is fresh and good.