A greenbelt around Halifax?

March 19, 2012
In anticipation of the five-year review of the city's regional plan, which kicks off tonight at a public information meeting in Tantallon, a coalition of 36 environmental, business and community groups is advocating that a "greenbelt" be added to the plan.

The coalition is called Our HRM Alliance, and given the odd geography of HRM, its proposal for a greenbelt isn't as simple as drawing a green corridor around the urban area.

Rather, the proposal consists of four overlapping maps, providing different kinds of protections and restrictions to various lands.

The first is called "Protected areas and natural corridors," and is seen below (click here for the full-sized version): 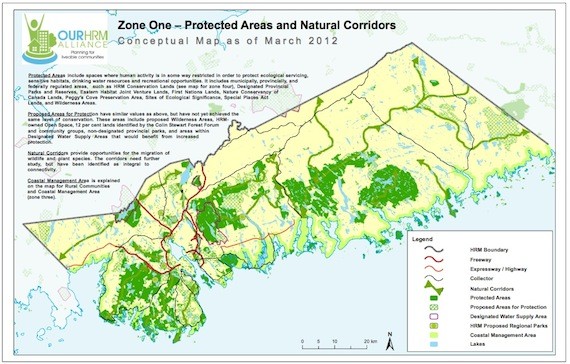 Most of this map will be non-controversial, because a lot of the green areas are already provincially protected wildernesses: Tangier Grand Lakes, White Lake, Waverley-Salmon River Long Lake, Clattenburgh Brook, Five Bridges and Terrence Bay.

Additionally, the map includes Long Lake provincial park, the Lake Major and Pockwork watershed areas and seven wilderness parks that were proposed in the regional plan, including the Birch Cove Lakes-Blue Mountain Wilderness and the Western Common.

The alliance's proposal also calls for the Herring Cove backlands to be designated as protected, and for wildlife corridors connecting the various natural areas to be created, with protection given to the corridors as well. The Ecology Action Centre's Raymond Plourde says that the group is hoping the city can take the lead on establishing the location of the corridors, but they'll mostly follow creeks and lakes, with some other innovative ideas, like a powerline corridor connecting two of the areas.

The zoning protections for these areas would be absolute: There would be no development at all in the areas, and uses would be severely restricted.