A man against the people

Peter Kelly used to be a people's champion against bureaucracy. How times have changed. 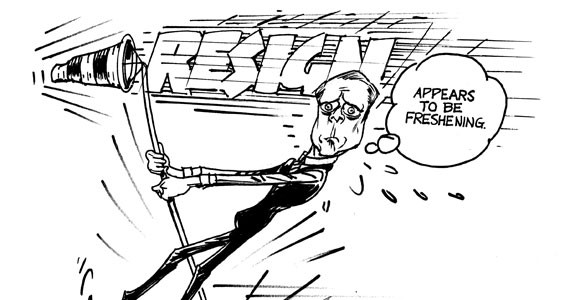 In the days after the Common concert funding scandal came to light last week, I noticed a new parlour game being played everywhere I went. The goal sounds simple: Name a contender who can challenge mayor Peter Kelly in next year's municipal election. However, it's surprisingly hard. Just a short list of names keeps coming up, heavy on the obvious choice of actual politicians---including NDP MP Peter Stoffer, former councillor and 2008 mayoral candidate Sheila Fougere, current councillor Sue Uteck and retired federal and provincial NDP leader Alexa McDonough---with only a few interesting outsiders, all of whom are already vocal critics of city government (such as pollster Don Mills, former concert promoter and current college prof Waye Mason and Commonwealth Games naysayer Bruce DeVenne).

Those suggestions represent a very real feeling among people that the concert scandal has made the so-far unbeatable Kelly vulnerable. Nonetheless, I should clarify that "everywhere I went" means errands and hanging out without leaving the peninsula, and at times the game of Peter Out was an exercise in the anti-Kelly choir singing to the converted. The suburban and rural voters who make up the bulk of Kelly's base don't seem as quick to pin the blame for any concert corruption on Kelly. We can all agree it's better for the city when sketchy business like the concert funding scandal gets rooted out, but we see Kelly's role differently. And we have for a while.

The urban chattering class has long complained about Kelly's inability to lead, with references to the Commonwealth Games bid collapse, the sewage treatment plant breakdown and now the concert craziness as examples of his meddling incompetence. The Kelly voters, meanwhile, consider him a fine leader---a lone man in a thankless job, representing a whole city full of people against a bureaucracy so incompetent that it can't stick to a budget for a sporting event and puts the electrical plugs below the waterline in a sewage plant.

As long as Halifax elections are picking a nice guy in chief, Kelly doesn't need to pay any attention to people asking him to resign over Gig Trouble. He is an absolute genius at understanding his voter base, so if he's comfortable entering the election cycle by playing the clueless card about his signature on the $400,000 loan document that triggered the concert funding scandal, I can't question his confidence.

But if you stake your career on standing with the people against the bureaucracy, what happens when you turn into the bureaucrat working against the people? When you become the ball-dropping paper-pusher who doesn't care about real people's concerns?

At the risk of piling on to Kelly, this issue we are publishing news editor Tim Bousquet's story "Peter Kelly's failure of will" about what's happened to Mary Thibeault's estate since she passed away in 2004. Kelly agreed to be executor of the estate, which made him responsible for dispensing about $500,000 among her 18 heirs. Thibeault called Kelly a friend and named him as one of the heirs, and was doubtless comforted knowing her affairs would be taken care of by Halifax's popular mayor after her death. Yet as Bousquet discovered on Monday of this week, when he first read Thibeault's file at the Nova Scotia Court of Probate, the estate has remained unsettled for the past six-plus years, and some of the heirs have had it with Kelly.

When Bousquet approached Kelly to talk about why it's taking so long to pay the relatives and charities named by Thibeault, Kelly demured, saying, "That's a personal matter." And so it was. At least until a group of heirs hired a lawyer to represent their interests against the foot-dragging Kelly.

"Let alone Peter Kelly's blatant disregard for fulfilling the duties of an executor, his arrogance towards all of us beneficiaries really angers me," is how a Thibeault cousin put it in documents filed with the court. It's a stinging rebuke that shows Kelly losing his grip on the common touch. You can read the full story here.