The lack of a fast ferry isn’t the only problem in Bedford, says Tim Bousquet. 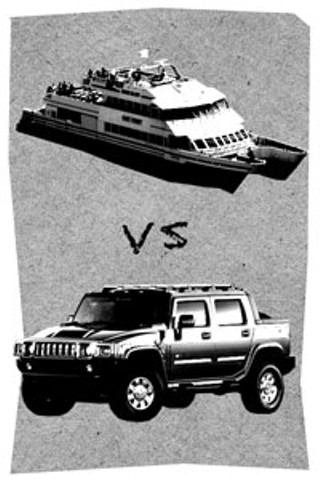 I went to Bedford to talk to Bob Kerr, a lone citizen-activist fighting Sobeys’ plan to build a gas station in the parking lot of its store at Mill Cove Plaza. But I came away thinking there’s a much bigger issue: our society just can’t seem to structure itself in a rational fashion.

Specifically, we’re about to throw $30 million at a “fast ferry” connecting Bedford and downtown Halifax, but we’re doing everything we can to undermine the ferry before it even sails.

A retired Navy man, Kerr focused on safety and environmental aspects of the gas station proposal—the station would be near the busy Bedford Highway on loose fill dumped on a former wetland abutting Moirs Pond.

“There’s nothing terribly wrong or risky with any one part of this,” he continued. “It’s when you add all the parts together and look at the whole picture, that’s when you see the problem.”

Look at the whole picture. That’s when it struck me: this place—the area around Mill Cove, the surrounding neighbourhoods—is put together all wrong.

The houses up the hill are relatively close together—potentially ideal for transit. But they’re fronted with two-car garages, and the “cars” are often SUVs, too large and inefficient for their likely use, commuting to Halifax. It’s no accident the Hummer dealership is located on the Bedford Highway.

Then there’s Mill Cove Plaza. The Sobeys is a stone’s throw from the shore of Bedford Bay and the proposed future ferry terminal, but it’s oriented to the highway and a sprawling parking lot, instead of to the natural beauty next door. Recently, Sobeys expressed an interest to fill in Moirs Pond, so they could build a couple of fast food-type retail shops, also facing the highway.

“I’m not anti-development,” said Kerr. “This could be a real jewel, with restaurants looking out onto the water, the whole deal.” I pictured the ferry terminal, with a bustling retail corridor stretching through the Sobeys land, perhaps with two or three-storey buildings, overlooking the bay. Commuters stop for coffee on their way to work, stop at restaurants for dinner on the way home. It becomes the community centre for the thousands of residents within walking distance.

Instead, Sobeys proposed, and the city approved, a gas station.

Kerr has appealed the approval to the Utilities and Review Board, and is considering hiring a lawyer. He realizes he’s outgunned by Sobeys. “I’m getting scared, to be honest.”

Let’s step back again, and see what’s going on: The federal government will likely pony up $30 million for the fast ferry so the Conservatives have a bit more pull in the Bedford riding. And the city will gladly accept the money to make it look like they’re doing something on the transit front.

But so long as we continue to build infrastructure for the daily SUV commute, the ferry will remain a diversion, a lark, and not part of the structure of our lives. And 20 years from now, people will gas up at Sobeys, point at the sad, lonely ferry terminal stuck behind the loading dock and say, “See? Transit doesn’t work.”