Looking back at the year’s biggest food and drink news—the Stillwell Beergarden—and other highlights. 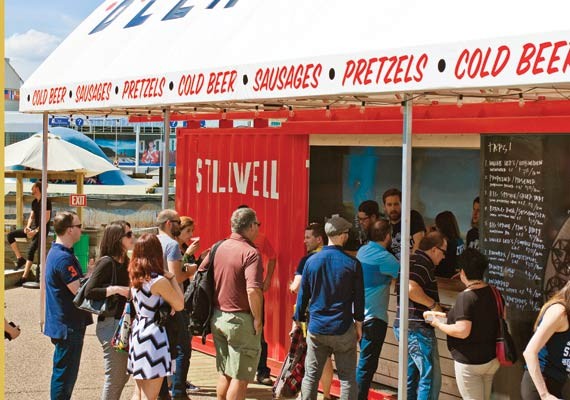 If Norma Desmond was a city street, dreaming of a return to star billing—a return to the halcyon days when CDs and books would bring people to stores and the windows of pool halls and artsy bars glowed with life—she wouldn't have been Sunset Boulevard, she woulda been Barrington Street.

Barrington has creaked along over the past decade, a main attraction that fizzled its way into losing its above-the-title status to hip up-and-comers like Gottingen and Agricola. In the past five or 10 years, construction teams became a common sight, Baby Jane in safety vests slapping a shiny new layer of empty storefronts on the face of the withering street in an attempt to detract from its fading beauty and decay.

"When we moved in it was pretty crummy," says Chris Reynolds.

Reynolds, along with partners Laura MacDonald and Andrew Connell, opened up Stillwell just a hair over two years ago. "There have been a couple of closures since we moved in, even just right around us," he says. "But you know what, I think Barrington is getting a lot better. There are some really good things that have opened recently, for sure, and lots of good stuff on the horizon, too."

Yes, for Barrington, there actually seems to be a comeback. It's not quite ready for its close-up, but thanks to a slew of new businesses over the past few years—Obladee, Freak Lunchbox, 2 Doors Down, Temple Bar, The Old Apothecary, Elle's Bistro and even the main street sheen of a store like Urban Outfitters—it's clear that there's been a call of action. And then there's Stillwell.

Stillwell is, in fact, a huge part of the reason why Barrington is bouncing back. (People are actually on the street after 5pm! Imagine!) More than that, though, Stillwell is a big part of the reason why Halifax as a whole is getting better. The team behind this bar is the best example of what we can hope for in not only food culture, but in Halifax's business community. They bring three things to the table that are incredibly important to the future of this city: innovation, risk-taking and a true desire for development.

Beyond their part in breathing life back into Barrington Street, the team at Stillwell has pretty much single-handedly reinvigourated the waterfront for locals, bringing the what-ifs and if-onlys whispered by many over the years to a bright reality with a big, red shipping container. There has quite simply been nothing more exciting to happen in food and drink this year than Stillwell's beer garden.

It took a year to bring their vision to life, to find a way to take advantage of the tourism capital that is inherent to Halifax's waterfront while offering the city's restaurant and bar scene something entirely different. Reynolds says he had definitely expected the beer garden to be alluring to tourists who were making their way around the waterfront, but since Haligonians aren't exactly lining up for overpriced seafood, shitty souvenirs and rides on the Harbour Hopper, they didn't count on it becoming a thriving local hangout.

"We were happy with it being a cool new thing for tourists to experience, but we were really surprised that it was mostly Haligonians who were there. That was super sweet," he says. "I would never take credit for ushering in any kind of eras or anything like that, but you know, whatever little bits and bobs we can do to improve the culture downtown, that's what we aim to do."

There has been some controversy around the space—complaints over development of the previously unused area of the waterfront popped up once the unique idea was successfully brought to fruition, along with demands to open the space to tender—but Reynolds feels like they have simply shown that hard work and creativity is something that pays off. And as much as they want the space back next year, Reynolds also sees a victory in the fact that something like the beer garden can exist at all. "I think the Waterfront Development Corporation has basically said 'We're open for business; approach us with good ideas.' There are, like, 40 other spaces down there that could have awesome businesses."

On Friday Stillwell will find out whether or not they won the tender and can reopen in the same location in the summer of 2016. Reynolds has no complaints about the process they must go through to attempt to renew their lease. "It's publicly owned land," he says. "It needs to go through due diligence and due process. We're happy to be a part of that. I think our bid is pretty strong. We feel confident."

It's fitting that the year will end with the province either rewarding a combination of new ideas and hard work, or caving to the "no fair!" culture of complaints that chooses to tear success apart out of unimaginative spite. Do we celebrate innovative business people creating something where once there was nothing, or do we build things up just so we can file some paperwork and tear them down? What kind of city are we? How do our businesses grow? Are we planting annuals or nurturing perennials?

Whatever happens on Friday, Reynolds says they'll adapt keep growing no matter where they have to plant themselves. Then he laughs: "Star Wars comes out the same day so at least one great thing will happen that day anyway!"

DOWNTOWN DARTMOUTH
Battery Park Beer Bar/North Brewing Company is the exclamation point on a banner year for food and drink in downtown Dartmouth. Food Noise, New Scotland Yard Emporium, the King Street Cafe, Il Trullo and the Portland Street Creperie have made Dartmouth an unavoidable food destination this year. It seems fitting to say this year that the force is strong on the Dark Side.

MARKET LIFE
Obviously the joint 265th anniversary of the farmers' markets in Halifax has been a big story this year, but the other achievement worth celebrating was the opening of the Dartmouth North Community Food Centre. And with rumours of another farmers' market being developed in Spryfield, it's hard not to be excited about how accessible local food is in HRM.

CRAFT BEER & COCKTAILS
Beverages continue to steer a lot of the food scene in the city. For my money, Field Guide continues to be the best cocktail bar in town, but they now have very good company with Temple Bar and Lot Six. And more craft breweries popped up this year, from Unfiltered and Good Robot to Spindrift and the upcoming Nine Locks. You can even fill a growler at Bishop's Cellar for god's sake.