A tech scene to be seen

The Coast tries to improve its focus as Volta grows too big to miss. 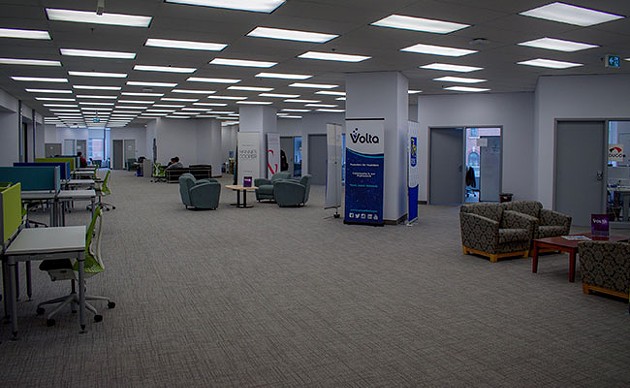 The Coast is very much into local people doing cool things, but it has a blind spot in relation to Halifax’s tech scene. That’s because tech firms don’t usually have an inviting retail presence like the stores and restaurants we obsess about in ShopTalk, and tech creators tend to be making things for consumption by an audience bigger than—or completely outside of—Halifax. When a big American musician comes to town for a show, we can talk about it in the Arts section. When a locally made app goes big in the States, The Coast freezes.

902Tech is our attempt to fix this error. A section that will appear occasionally in print and more often here online, 902Tech gives The Coast a way to talk about happenings in the technology sector. Which is useful, because a lot is happening. As a for-instance, let’s look at Volta Labs.

Volta was started in 2013 by J. Curry, Patrick Keefe, Jevon MacDonald and Milan Vrekic, tech and/or business veterans who thought Halifax’s technology industry could benefit from a catalyst. It was an experiment to see what would happen if entrepreneurs had a space where they could work around other entrepreneurs, a place to turn up the optimism and knowledge sharing, turn down the fear of competition. And it worked, bringing people out of the woodwork and launching several companies, while establishing Volta as the industry’s de facto centre and bellwether.

From its first soon-cramped offices, in a Spring Garden Road bank building that was slated for demolition, in 2015 Volta grew into 20,000 square feet of former Bell Aliant space in Maritime Centre. “The challenge in that space was you’re taking over an ‘80s, early ‘90s executive environment, so aesthetically it may not have been as appealing,” says Volta CEO Jesse Rodgers, “but it worked. You had entire companies in what used to be one’s person’s office. The symbolism of that can’t be overstated.”

Still, this bigger, better space was up in an office tower, leaving Volta and the businesses growing there physically disconnected from street-level Halifax. “It’s a bit weird to expect someone to get in an elevator and go up to an office tower and think this is an ecosystem and a welcoming spot,” Rodgers says. The space also quickly became too small.

So a couple weeks ago Volta started a massive expansion, growing to 60,000 square feet over Maritime Centre’s first three floors, including the very visible lobby, with a grand opening planned for September. At that point, Volta will ideally feel less like a clubhouse and more like a campus.

Rodgers is happy to be trading postcard views of Halifax harbour for windows that aren’t far from the sidewalk: “It’s amazing to look up Spring Garden Road. Every day we discover something we love about this spot. No, we don’t get to watch the helicopters and the ships. But you get to be part of the city.”

If you’re at all curious about finding your own place in local tech, you should drop by. They’d love to see you.