Former child refugee fighting to remain in the country he calls home. 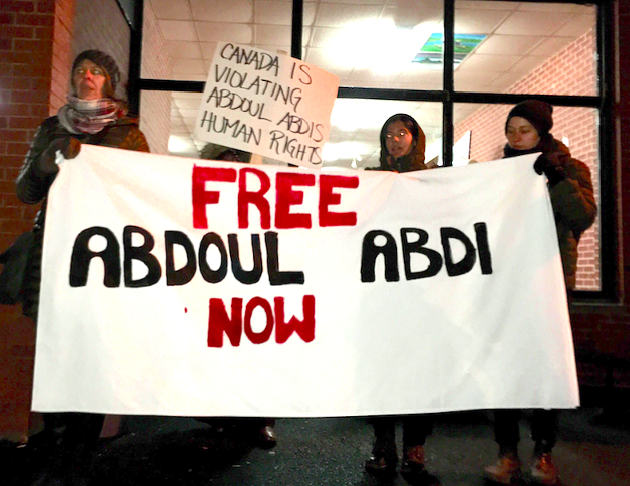 Abdoul Abdi is a free man, but still not a Canadian according to the federal government.

Lawyer Benjamin Perryman announced on Monday that his client will be released from custody, by order of the Immigration and Refugee Board, and sent to a halfway house in the greater Toronto area while he fights to remain in Canada.

UPDATE: #AbdoulAbdi has been ordered released from detention by the Immigration and Refugee Board. He will likely be transferred to a halfway house tomorrow. Canada continues to pursue his deportation.

It’s a small victory for the 23-year-old former child refugee who was failed by the same welfare system set up to protect him.

Abdi arrived in Nova Scotia from Somalia with his sister and aunts at the age of six. He was shortly thereafter taken from his family by the province and placed into foster care.

In his 18 years of state care, Abdi lived in over 30 homes and suffered abuse at the hands of the people charged with looking after him.

Neither the department of community services nor any of his guardians ever applied for his citizenship.

Earlier this month Abdi was released from prison after serving four years on multiple charges, including aggravated assault. As a permanent resident with a criminal record, he’s now facing deportation back to Somalia—a country he hasn’t seen since he was a toddler, and a fate his sister likens to a death sentence.

Activists and public pressure around Abdi’s case have boiled over in the past few weeks thanks to the amplification of his story by writers like El Jones and Desmond Cole, culminating in Abdoul’s sister confronting prime minister Justin Trudeau during last week’s town hall in Lower Sackville.

“Why are you deporting my brother?” Fatouma Abdi asked. “If it was your son, would you do anything to stop this?”

As reported for The Coast by Julia-Simone Rutgers, Trudeau declined to comment the specifics of the case but promised to “try to do the right thing based on both rules and compassion.”

Premier Stephen McNeil stated last week that the department of community services will complete a full review of any similar cases of children missing supports.