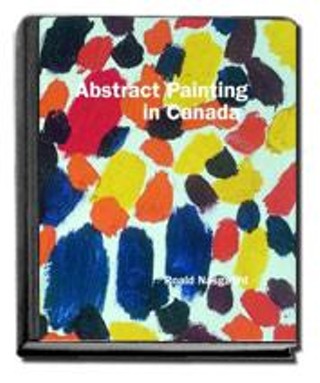 Abstract Painting in Canada
Roald Nasgaard
Douglas & McIntyre
Splendid. A big book—432 pages with 200 illustrations in colour. It's much easier to reel off the names of American abstract painters: Newman, Still, Pollock, Rothko, Kline, Gottlieb...on and on. Canadians? Not so much. Borduas, Martin, Molinari, Shadbolt... uh, who else? This book puts the Canadians on the wall.

Fifteen chapters look at particular times and places: Montreal, Toronto, Vancouver; the 1920s, 1950s, 1960s. Halifax has a chapter dealing with conceptual painting after 1970: Kennedy, Ferguson, Zuck, Cameron and Spalding (who, after five years at the AGNS, is heading west to the Glenbow Museum in Calgary).

The book has a lot of ground to cover and it is a survey: For example, Gerald Ferguson gets two pages of text and three illustrations. Garry Neill Kennedy gets a little more text and an installation shot of "The Middle East (And Beyond), 1992."

Discoveries abound and as a good survey, Abstract Painting presents—in overview—works and artists you may want to follow up on in detail: Joyce Wieland, Claude Tousignant and Jacques Hurtubise (he's lived in Cape Breton for years, but you'll find him in a section on Montreal painters).