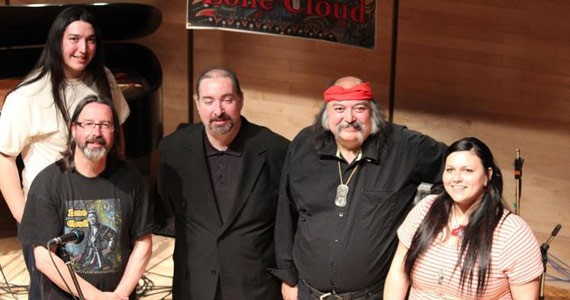 "That was when I got really passionate about music," Syliboy says. "Some friends told me there was a band that was on The Ed Sullivan Show that I had to see. And then, it was full-time Beatlemania."

This influence carried on and culminated in Lone Cloud, Syliboy's Truro-based band. This Friday, November 23, Lone Cloud releases We Are Medicine Men at the Museum of Natural History.

Syliboy founded Lone Cloud about 10 years ago with his son, lead guitarist Evan. The band is a blending of Mi'kmaq tradition and modern style, an eclectic mix of jazz, folk rock and Aboriginal drumming (the band's centrepiece). For the release show, Lone Cloud's regular line-up—the Syliboys plus singer Rachel Henderson and Danny Sutherland on bass—will be joined by PEI guitarist George Antoniak.

Performed in both Mi'kmaq and English, We Are Medicine Men features guest songwriters and a cover of "Pontiac" by one of Syliboy's favourites, Willie Dunn. Recorded in Halifax at Heart Strings Productions and The Music Room, the album is full of honours shaped over a decade. But the band pays the most tribute to 19th-century Mi'kmaq medicine man Jerry Lonecloud, more of an inspiration to Syliboy than any of the Fab Four.

"He was a very positive person," says Syliboy. "He had an eventful life and he seemed quite energetic. He preserved culture."

Besides serving as a music venue on Friday, the museum also houses The Jerry Lonecloud Exhibit, a collection of artifacts Lonecloud donated in the 1920s after spending years gathering things that "he thought would be forgotten," Syliboy says. Lonecloud has been featured in Syliboy's visual art, as well. "Lonecloud said, 'I was born of medicine people,' and that has always stuck with me. But he was a showman, too," Syliboy says. "I think if Jerry was still around, he'd be onstage with us."