Multiple rallies are being held across the province this week, and letter-writing campaigns are being sent to Mark Furey, Bill Blair and Premier McNeil.

On Monday July 27, over a hundred people gathered at Victoria Park in downtown Halifax to protest the lack of an official public inquiry into the Nova Scotia shootings that took place on April 18 and 19.

Just four days before the protest, on July 23, the federal and provincial governments had announced a joint review of what they are now calling the “Nova Scotia tragedy." But instead of the public inquiry that families had been asking for, the Ministers Bill Blair and Mark Furey announced an independent review panel consisting of three members: Michael MacDonald, who served as Nova Scotia's Chief Justice until 2019; Anne McLellan, a former liberal MP who's had stints as both deputy prime minister and as Dalhousie University chancellor; and Leanne Fitch, who spent 34 years as chief of the Fredericton Police Force and who a government official described as an expert in “intimate partner and gender-based violence.”

The three panellists will spend months investigating before coming back with an interim report in February 2021, and a final report by the end of August 2021 (although there may be additional interim reports if the panel so chooses). Reports are to be released to the public with “reasonable delay” after that, and the ministers are expected to “fully consider the review panel’s recommendations and commit to implementation, where reasonable, within a reasonable time."

But the independent review panel won’t have the same authority an official public inquiry would.

“The focus of the review is not about finding fault, it’s about finding answers,” said a government official on Thursday when asked if the panel’s findings could result in charges being laid.

Although the government said last week they expect “detailed information” to be made public, bodies like the RCMP will still have the right to claim privilege and keep documents private in the case of an ongoing criminal investigation, and the panel can’t compel testimony under oath.

“By dismissing the rightful request for a full public inquiry you are showing not only a lack of compassion but a failure to understand the basic principles of restorative approaches and trauma-informed care cited as central to the review process,” Emily Stewart from Third Place Transition House in Colchester County told the crowd at Monday’s rally. Nova Scotia RCMP has been heavily scrutinized for their response to the mass shooting that left 22 victims dead, and the failure to send an Emergency Alert to residents. The rally on Monday afternoon highlighted these among the 22 reasons why activists demand an inquiry be called.

“Because the victim’s families asked for a public inquiry and were denied; because the murders are rooted in gender-based violence and misogyny,” read Martha Paynter from Women’s Wellness Within.

Activists across the country have also called for an inquiry with a feminist lens, one that investigates and acknowledges the role of domestic violence, gendered violence and femicide in the shootings.

Sarson and fellow FFF co-founder Linda MacDonald were among those who signed onto a release demanding for a feminist analysis more than three months ago. Yet the government has still failed to ask for the expertise of activists who would bring a feminist lens to the table. 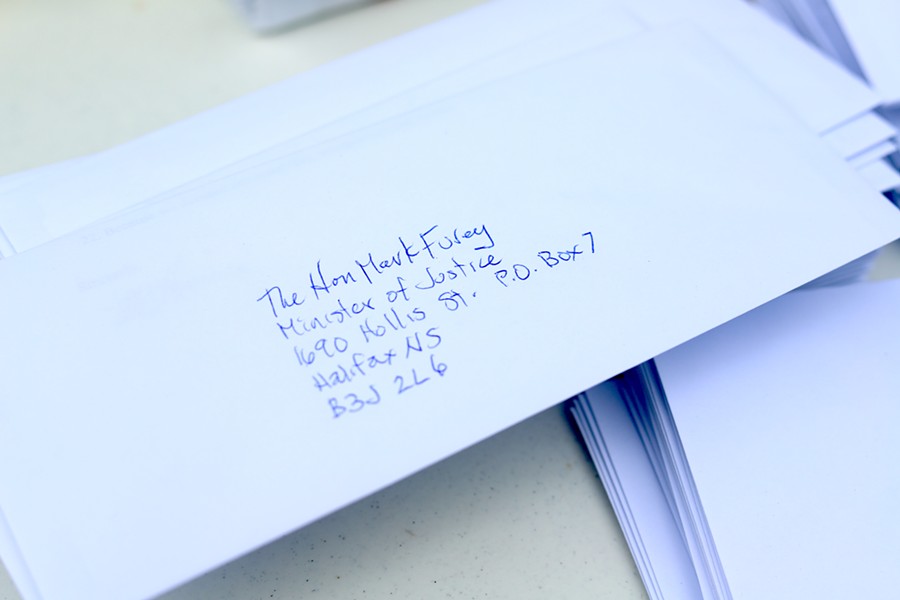 “My first reaction was that these two men, Bill Blair and Mark Furey, they didn’t listen to the people at all, like zero,” says MacDonald.

Although the government lists “Contributing and contextual factors including the involvement of gender-based and intimate-partner violence” as one of the things the panel will investigate, FFF says that’s not the same thing.

MacDonald and Sarson say for them to be satisfied, they want to see an inquiry that takes into account gendered violence in all areas of society, not just policing.

"We have school systems, we have health care systems, we have community systems, and all of those have to be involved in a feminist analysis. That's what a feminist analysis is, it's looking at the whole society, it's not just cutting a little piece of the pie out," says Sarson. "That's not going to do it, it's not going to change the culture of Nova Scotia."

"The feminist analysis brings in the connection between misogyny, male violence against women, femicide and mass shootings. Cause they’re all connected," adds MacDonald.

On the day of the announcement, all 10 Nova Scotian Liberal Members of Parliament signed onto a letter in support of the review. But in the days since, both Lenore Zann and Darren Fisher have walked back that support, saying they were "deeply disappointed" and wanted a "greater response."

Protestors gathered outside NS Justice Minister Mark Furey's office in Bridgewater on Monday to join protests against the planned review, and the lawyer representing the families has organized another rally for this Wednesday in Halifax to peacefully march from the ferry terminal to Province House starting at 10am.