Ordering off the menu can be a great way to flex your culinary muscles, try something new and act like a real hot shot. Here’s how to do it smoothly. 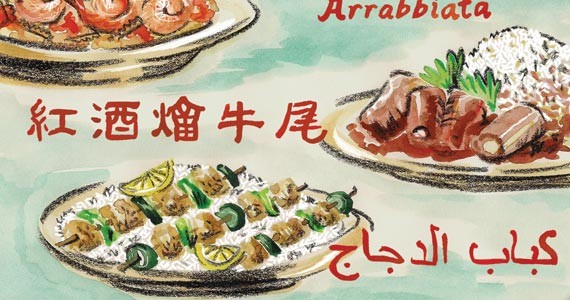 Everybody likes being in on a good secret. There's something deliciously wonderful about knowing something really good and juicy, and then---after savouring it all for yourself---sharing it with others. Open secrets are the best secrets of all.

Restaurants often have their own little open secrets, or rather, "secret" menus. McDonald's has the unofficially acknowledged McGangBang (double cheeseburger with a McChicken stuffed inside), Wendy's has the Grand Slam (a burger with four meat patties) and Starbucks has the Green Eye (three shots of espresso in a regular drip coffee).

Websites and messageboards spill the beans online of heretofore unknown culinary delights. But chain restaurants aren't the only ones in on this game.

Manager Sean Neil of il Mercato Ristorante says that when it comes to their menu, "Wait staff often joke, 'Can you drop off that list of ingredients?'" Neil says that people often ask for substitutions of all sorts, creating their own dishes. "Everyone is a chef when they see our menu," he says. As for the kitchen doling out all these kooky creations, Neil jokes that "They don't always like it, but no one can hear them if they don't."

But leaving your dinner in the hands of an angry line cook may not always be the smartest move. Many of Halifax's Japanese restaurants offer customers the option of disregarding the menu altogether, with an omakase meal. "Omakase is exciting because you don't know what is coming," says Aya Fukuyama from Sushi Shige. Loosely translated, omakase means "I entrust it to you," letting the chef decide what to put in front of you. "It can be hard to explain to non-Japanese people what omakase is. In Japan, you can go to restaurants and simply ask for omakase, and not even look at the menu." In Halifax, diners generally are asked to inform the restaurant a few days ahead of their plans to dine omakase, so that the chef can ensure that certain items will be available to them. Diners may find themselves starting with delicacies such as monkfish liver or an assortment of tsukemono, Japanese pickles. Or perhaps, more homestyle dishes such as chawanmushi (a steamed and savoury seafood custard) or kinpira gobo (sauteed burdock root). Omakase dinners generally start at around $60 per person, with choices only limited by the chef, and your budget. As for the diners, "Some people want to know what is coming," says Fukuyama, "but some people really enjoy not knowing."

And therein lies the joy of ordering off the menu. Chinese restaurants are often the best place to ask, "What's not on the menu?" Next time you're having dim sum at Chinatown on the Bedford Highway, ask for their special ribs. These juicy and slightly crisped delights aren't on the menu but are ridiculously good.

Sometimes, the menu items are right in front of you, but you can't decipher what they are. At 9 + Nine in Clayton Park, diners look at a small two-page menu, but there are also specials written in Chinese on the wall. So if you want to find out what possibilities are scribbled there, or even what the table next to you is dining on, all you have to do is ask. "People ask for what is on the wall, or want to know what the dishes being laid out are," says David Luong, a waiter at 9 + Nine. "Our regulars don't even look at the wall, they just ask us, 'What's fresh?' as soon as they sit down." Some diners don't even bother asking, they simply tell the wait staff to bring them food. "I work Friday and Saturday nights and through the four to five hours I work, 40 to 50 percent of the people just say, 'Make me three dishes,'" he says. As for who is ordering these dishes, Luong says that more non-Chinese people are asking for traditional ingredients in their dishes.

Looks like letting Lady Luck in the kitchen is sometimes the best thing you can do.