No, of course you can’t see them all. But you can die trying! And by “die” we mean “enjoy yourself immensely.” Let’s walk through it together, shall we? 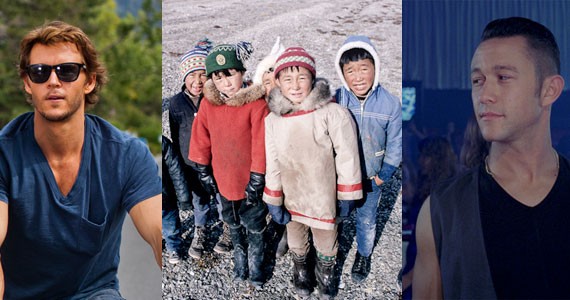 I'll hear no fancy shoe complaints from you yet, we've just begun. Break out the good ones and head to Don McKellar's The Grand Seduction (7pm, Park Lane) and kick off AFF with hunky Taylor Kitsch before whooping the Monday away at the opening night gala (9pm, Cunard Centre).

Kelsey Thompson's short Paddle To The Ocean will break your heart and inspire you at the same time (Atlantic Shorts 1, 4:30pm, Park Lane). The Right Kind of Wrong takes you to Rom-Comville, while also taking a detour through Hunky Actor Town–if you're noticing a theme, I promise it will stop (7:30pm, Park Lane). Finish by scaring the tar out of yourself with our cover feature film, There Are Monsters (see page 8). Then walk home. Alone. In the dark.

Today is Descendents day, guys! Filmage: The Story of Descendents/All will push you to acheive ALL and wake you up with coffee-like energy (3pm, Park Lane). Then the rag-tag mob of mobsters in Roche Papier Ciseaux

demonstrates that it's fun to do bad things... or is it? (4:45pm, Park Lane). Pretend you're doing some History extra credit with the US Civil War piece, Copperhead starring local Charlie Rhindress and not-so-local Peter Fonda (8pm, Park Lane). The rest of the day will be devoted to tension and suspense in various forms with Bunker 6, local director Greg Jackson's debut feature where radiation forces a group to become too close for comfort (9:45pm, Park Lane) and V/H/S 2 scares the crap out of you yet again before bed with gore, blood and the like (11pm, Park Lane). Proceed to walk home in the dark.

Art reigns with Sign Painters, a feature documentary about those talented hand-letterers that make our cityscape more lovely (12pm, Park Lane), have a laugh with Nicole Dorsey's Pop the Grapes short about self-defense and boots (Shorts 2, 2pm, Park Lane), then design your mind with Design Is One: Lella & Massimo Vignelli, a documentary that pulls back the curtain on the lives of two of the world's most influential designers (4pm, Park Lane).

I'm just going to go ahead and assume you've taken the week off for AFF. Katherine Knight and Marcia Connolly's Spring & Arnaud makes a great pre-lunch documentary about two acclaimed Canadian artists, their work and the love they share (12pm, Park Lane). Go home, GTL then make your way to Don Jon to see Joseph Gordon-Levitt and ScarJo fall in love, laugh, fight and look better than you ever dream of looking.

You're in the home stretch, you have eaten more popcorn than you care to admit and just want to relax and watch some quality animation, you say? Thank god for the Atlantic Animation showcase (10pm, Park Lane). See what your quiet-ish neighbour was up to in their apartment with all those sketchbooks.

Last day! Cry into your theatre nacho cheese before The Invisible Woman steams up the joint the way only a period dramatic romance can. Ralph Fiennes plays Charles Dickens and you play an audience member going "Daaaamn Dickens get your swerve on," (6:30pm, Park Lane).