Reviews for Dédé and All Tomorrow's Parties

Les Colocs get the crowds into a frenzy.

Les Colocs get the crowds into a frenzy. 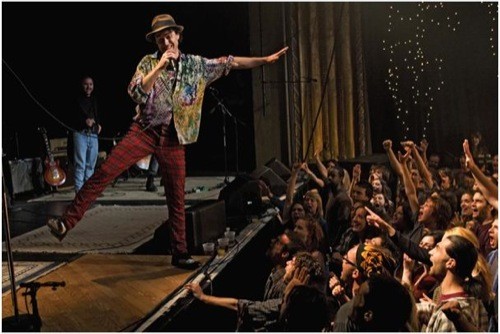 I started the film fest off with a healthy dinner—let's see how the diet deteriorates over the week—and then it was off to Dédé, à travers les brume, a Quebec film, directed by Jean-Philippe Duval and produced by Roger Frappier, who introduced the movie. The mostly francophone crowd (I think we were the only anglophones there) gasped when they realized that Frappier was there to introduce it. In the film there's a nod to Frappier as well: a subway poster for Jésus de Montréal, which he also produced.

Frappier introduced the movie in English, and then a gentleman spoke up from the back, and said something along the lines of "en francais, monsieur Frappier. We're all French here." Um, actually no, and especially in 2009, I wouldn't make that blanket statement about any language, in any crowd. I'm totally sure that came from a place of pride, but in a microcosmic way, that exchange was the perfect intro to Dédé.

Les colocs were a band formed in the late 1980s by Dédé Fortin, in a city still smarting from the Non vote during the 1980 Quebec referendum. I hadn't heard of them, but my husband Sean, growing up in Ottawa, knew their music. But Duval does a great job in placing their importance to Quebecois culture, even if you weren't around. They were highly political, and Fortin insisted on French lyrics, which just wasn't cool in the music biz at that time. I'm sure that bands like Malajube, and even Arcade Fire, owe a lot to these guys. The music was definitely of the time too (if you remember Me, Mom and Morgentaler, another Montreal band), with an eclectic fusion of styles that could swing from blues to folk to punk to world beats. Living in Toronto during the 1995 referendum, I remember the No rallies, the "My Canada includes Quebec" signs, so it was fascinating to see a depiction of the other side; a young generation who dreamed of their own country, with their own language. Dédé was shattered by the results.

Music biopics especially are pretty formulaic, but Duval breaks the mould slightly by using lovely animations (the real Dédé was an art student, and the animations are based on his work) although they were oddly all clustered at the beginning of the movie. The reinterpretations of his songs by Sébastien Ricard, who is a dead ringer for Dédé, were impressive too. This Montreal is gritty and exciting, full of tension and anticipation. But it all proved to be too much for Dédé, who suffered from depression, and committed suicide in 2000.

A story told without being over-sentimental but obviously full of respect and love, the film's out on DVD now—I suggest finding it.

When I was in Montreal over the summer, we tried to see J'ai tué ma mère, but it was the end of the run and the only theatre it was playing in didn't have subtitles. For someone who took French in university, I should be ashamed, but my language skills aren't good enough for a film. So when AFF programmer Andrew Murphy introduced the film last night as being French only without subtitles, we had to leave. (The catalogue says with English subtitles—apparently the box office and volunteers were supposed to let people know, but I know a few people who I was talking to in line who stayed, and got a good workout of their rudimentary French last night!)

No probs. Ran next door to watch All Tomorrow's Parties, about the experimental British music festival curated by Patti Smith, Mogwai, Portishead, Sonic Youth, etc. At first I groaned—nothing more boring than "hey, this was cool, too bad you weren't there," but within minutes I was totally into this mesmerizing movie. Like the Beastie Boys' Get Awesome, footage and photo stills were compiled from over 200 professional and amateur sources (HD, DV, 8mm, cellphone), and edited together in gorgeous ways, mixing split-screens, grainy Super-8 and old TV footage (like Smith on the 1970s morning show Kids are People too). Performances (both real musicians and anyone who happens to pick up a couple of pot lids) happen everywhere, under tarps, on the beach, in a casino—Daniel Johnston plays on the grass, and in a motel room where eager fans hang over the windowsill, peering in. Sonic Youth try to figure out chords in a dressing room (Kim Gordon: "it is an experimental music festival"); Iggy Pop being Iggy Pop; David Cross being heckled by a Jesus-loving fan; and other quick performances by Nick Cave, Portishead, Boredoms, Mogwai, Akron/Family, Grizzly Bear, Les Savy Fav, and more.

This is one of my favourite moments. If anyone came down from a spaceship and asked me to explain why we care about music, I'd show them this:

But like Dédé, where there's music there are that drugs and alcohol that come with the freedom and excitement of youth. Although you don't really see anything consumed in this doc, there's a so-high haze that at times is pretty hilarious. A young woman can't figure out how to get the innertube she's wearing out her door, another crashes through a balcony, after holding from the outside. Drunk dreadlocked dude looks so sad, locked out of his room, the beer bottle slowly slipping out of his hand to the ground. But when you see Grizzly Bear playing on the beach at dusk...

I want to go to there.

Warning: if you don't like watching British hipsters make out, avoid this film.