Some film festival thrillers from the weekend that explore human psychology

This weekend, several selections at the 35th Atlantic Film Festival explored human psychology through various narrative styles. On Friday, I rolled into the Lord Nelson Hotel at 1:30am to catch 1980 sci-fi musical, The Apple, which was one of the best worst movies I've ever seen, a terribly awesome, tacky romp through the exploitative music industry, set in the futuristic year of 1994. I honestly don't even know what the hell I watched but I wish I had done LSD.

On Saturday, I made it to the Reel East Showcase 2 at 12:30pm to see some incredible Atlantic shorts and animations. This particular showcase emphasized the skill, talent and resourcefulness of local filmmakers. Highlights included Seth Smith's Wind Through a Tree, which peered into vignettes of human experience from birth to the end of life. Equally comedic and dark, the experimental short had earnest moments of reflection on life's purpose. NSCAD film student, Raghed Charabaty, blew the audience away with Alia, a visually stunning portrait of the Lebanese Civil War (it also won the Starfish Student Art Award in May).

The most powerful short of the bunch, however, was Daniel Boos' Bound, a FILM5 production that focused on the exploitation of migrant and foreign labour workers. Drawn from a true Irish story, Boos created a short film packed with as much tension as humanity, which was rendered through the visible emotions of the film's characters. It was poignant, important and yet tender. Boos, a 2010 youth festival winner at Cannes, displayed incredible directorial maturity.

In the evening, Toronto's Director X looked fly as hell for the premiere of Undone, a story of a young Cole Harbour hockey player (Stephan James) whose social circumstances threaten his dreams. Written and produced by Floyd Kane (This Hour Has 22 Minutes, Salter Street Films), and shot in Dartmouth, the story uses 1989 high school race riots and social inequity to show how little things have changed in present-day Nova Scotia. Has anything changed?

Nope. People are still fucking racist. Women are still being trafficked in the underground sex industry. Young adults with diverse backgrounds still face fewer opportunities and much larger obstacles. This was Director X's first feature, and that actually did show. His notable and impressive work with artists like Kendrick Lamar and Kanye West didn't necessarily translate to a longer narrative. The cinematography was sleek, the soundtrack was effective, the acting was especially promising, but the overall vibe was more Degrassi High than Hype Willams. Such important and relevant subject matter could have been handled with more severity. I was expecting something like Belly, I guess. Still, this movie is a huge accomplishment in many ways — as a film that gives voice to the African Nova Scotian experience, to North Preston, to the very real and very present realities of systematic oppression in this province. There need to be 200 more films like this one. Yesterday, Undone was named the Best Atlantic Feature of this festival.

As AFF Program Director Jason Beaudry said, The Stanford Prison Experiment is "one of those smaller Hollywood films that slips through the cracks and ends up here." Starring Billy Crudup, who has the chops to be a bigger star than he is, and a roster of hot young male actors (exclusively), the film recreates the infamous Stanford Prison Experiment that took place at the Californian university in 1971. And when I say 'recreated,' I mean recreated exactly. Everything — the size and design of the simulated prison, the character costumes and appearances, the actual audio footage — was drawn from the archives of the disastrous but insightful psychological trial. The intention of Professor Zimbardo (Crudup) was to show that institutions create situations for violence and abuses of power. It's not that there's one bad apple; the barrel itself is bad. 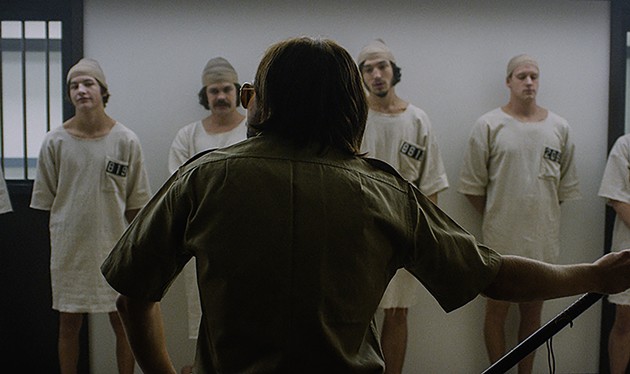 What started as a routine experiment quickly degraded into the worst examples of human behaviour just because it was sanctioned by the "institution." The trial was meant to last 2 weeks; after only 6 days, the experiment was terminated. It's a revealing look at how easy anyone can fall into the role of oppressed and oppressor. It's as simple as the flip of a coin. The performances in this film were superbly convincing. The overwrought scenes were actually an asset and this film might be one of the most accurate portrayals of a historical event. Because the real-life drama was so intense, no additional drama was necessary. Definitely worth watching!