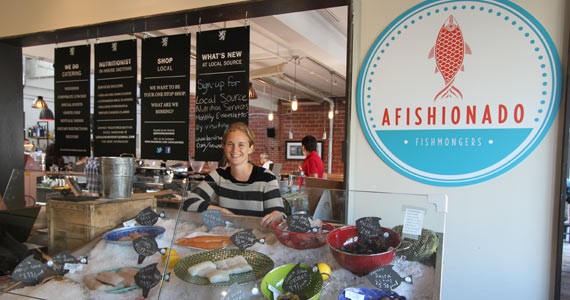 Hana Nelson is dedicated to knowing the story behind her seafood.

"This striped bass is really cool. It's from North River Fish Farm outside of Truro," says Hana Nelson, as she looks over the counter at Afishionado Fishmongers. The counter is a veritable map of Nova Scotia: oysters from Pictou, tuna from Sambro, Arctic char from Advocate Harbour, hook-and-line-caught halibut from points all over.

A global perspective helped inspire this local sensibility. After completing a Masters in agroecology in Norway and France, Nelson returned home to work with Select Nova Scotia. "Coming back to Halifax after studying in Europe and seeing that there is no fish available on the peninsula was crazy," she says.

Afishionado, while a boon to seafood-lovers, shines a light on problems that exist in regulations surrounding the sale of local seafood. With no other standalone, independent fishmongers in Halifax—sellers like Fisherman's Market, Clearwater, Goldwater and Evan's Fresh Seafoods are all tied to processing plants and distribution companies—for the consumer, this can mean that our wants or needs pale in comparison to the benefits of export.

"Which is why nobody's done it before!" says Nelson. "It didn't even make sense to open my own shop because of the supply issue; I'm buying such small quantities that I'm not even an important customer. Even to buy directly from fishermen: when he lands hundreds of pounds, he's not going to drive to Halifax with one hundred. That's why I decided to start here."

"Here" is a dedicated space at Local Source Market on Agricola Street. The counter is an opportunity for Nelson to operate on a small scale, and one for the Market to support a local food service that has a sea of rules that can be difficult to navigate alone.

The economic importance of exports in our region coupled with the lack of a widespread consumer outcry for products—"Nova Scotians don't eat a lot of seafood," says Nelson—means fresh, unfrozen seafood is less common and selection is limited. Finding fresh fish roe, uni, eel or other sustainably harvested fish and shellfish can be difficult, even impossible.

The rules for small-scale sellers of seafood are a totally different ballgame than those for, say, beef. When the cod fishery collapsed in 1992, jurisdiction of the fisheries shifted, becoming a federal issue. "If you cut meat in a provincially inspected kitchen, you can sell at a public market. But fish has to originate from a federally inspected facility," Nelson says. "I wanted to start at a market just on Saturdays—just to test the market—but I couldn't because it meant I couldn't cut fish myself. It meant that I had to get it in already processed. Then you don't know, necessarily, how it was caught or the condition of the fish. It is important to know the story; I need to get it in whole."

Afishionado's dedication to sustainability makes a fish's story very important. The shop uses Ocean Wise certification, a classification based on a fishery's abundance and resilience, fishing limitations and management, as their main guide. The items Afishionado carries that don't have that certification, like halibut and cod, are fished using science-backed sustainable methods.

Afishionado's selection highlights one of the major failings of Nova Scotia fisheries: a lack of sustainable scallops. "That's something that the Ecology Action Centre has been working on," says Nelson, who won't be carrying any trawler-caught scallops any time soon. "Getting the Department of Fisheries and Oceans to allow the diver-caught scallop fishery."

For anyone who is interested in seafood, Afishionado is a real catch.