A lot bars close at 2am. You don’t have to go home but you can’t stay there. Here’s a handy guide for those of you who really come to life in the wee hours. 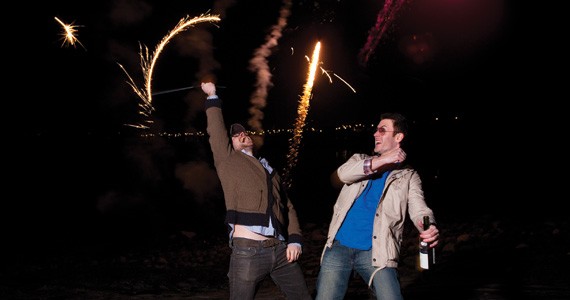 It's pushing 2am and an exhausted downtown bartender is wailing "last call." But your restless feet just want to keep dancing and you could drink until first light, if not longer. Fear not! This guide is for anyone who understands that a diner breakfast ought to be the last---not first---meal of the day.

Open until 3:30am, Reflections Cabaret (5184 Sackville Street, 422-2957) is a pretty wild spot, catering to the LGBTQ crowd but open to revellers of all genders. Cover can be as steep as $20 when big-name DJs perform, but if you're in the mood for a sweaty dance party, this winner of the Best Place to Dance award in The Coast's Best of Halifax readers' poll is a sure bet. Expect to wind up in a dance-off with complete strangers who may or may not try to make out with you in front of full- length mirrors.

Though that psychotic-looking moose head out front with bloodshot eyes may put you off it, anyone who feels like drinking a bit more after 2am can stop at The Toothy Moose Cabaret(1661 Argyle Street, 407-3170) and gyrate in front of several flat-screens rolling Country Music Television videos. The club stays open until 4am and you rarely have to pay cover. The New Palace (1721 Brunswick Street, 420-0015) and The Dome (1726 Argyle Street, 422-6907), both nightclubs full of university students looking to dance, inhale cheap drinks and pick up, also stay open until 3:30am. And if you want to cozy up to someone after hours in a private booth, you can hang out at Taboo Nightclub (1739 Grafton Street, 423-8226) until 3:30am.

Check out a house concert

Haligonians are renowned for throwing epic house concerts. You'll find pop sensations such as Ruby Jean---mysteriously covered in her own blood---singing in filthy dank basements packed with north end hipsters. You might just stumble into a cramped kitchen while indie-pop star Rich Aucoin performs under a parachute or wander into a red-lit party where five different DJs set the mood. Maybe you'll even find legendary singer-songwriter Al Tuck playing an intimate driveway show or catch bands like Duzheknew and Cousins on a makeshift living room stage.

It's tough to find out where all the all-night ragers are if you're new to the city. Your best bet is to head to venues where people plugged into the music scene can tell you where the party's moving next. Interested in noise music, no wave, new wave, indie music or---for lack of a better label---art rock? If so, find out about the next good house show by schmoozing at The Khyber (1588 Barrington Street, 422-9668), an artist-run centre and performance space, or Lost and Found (2383 Agricola Street, 446-5986), a vintage clothing store, gallery and concert venue. You'll meet plenty of bands who can tell you what parties they'll be playing at Reflections Cabaret's $Rockin' 4 Dollar$, an open mic on Mondays where bands compete to win cash. Anyone looking to rock out after hours should also chat with music lovers at The Seahorse Tavern (1663 Argyle Street, 423-7200). And whether you're into hardcore, '90s dance parties or freak folk, the hip kids at Gus' Pub and Grill (2605 Agricola Street, 423-7786) will tell you where to go for a good time.

Open 24 hours Saturday and Sunday, Casino Nova Scotia (1983 Upper Water Street, 425-7777) is a surreal experience. You'll wander into a sea of slot machines, covered in flickering lights and making a cacophony of Nintendo-like beeping noises. You can get in on table games such as blackjack, roulette, poker and craps until 4am. Last call comes at 3:30am, but you can stay well into the morning and sober up with some coffee and juice while playing slot machines with exciting names like Sparkle Kitty.

Luckily for slack Haligonians, the only dress code that's really enforced is that patrons can't be so hammered they wander in without footwear. Casino rookies should check out Casino Nova Scotia's poker etiquette guide (casinonovascotia.com/casino/etiquette/poker/).

Craving booze after hours? Brewing beer is part of the cultural landscape in Halifax, where the sweet, yeasty aroma of our breweries is never far from our nostrils. Various speakeasies have popped up all over the city over the years. If you learn about a speakeasy, you can keep your hosts happy by following some etiquette rules: don't bring a huge crew of people that your host hasn't met before and remember that even though speakeasies may feel informal, tipping isn't frowned upon.

Keep your ear to the ground to find out what venue the North Common Brewer's Union will pop up at with a cooler brimming with delicious home brew. Inspired by the underground bicycle delivering service Cycle Sandwich, the group's anonymous creator helps people buy and trade beer with folks across the province. "People are learning the craft of home brewing and getting to trade with other people," he says excitedly. The small-scale operation connects about eight different brewers, who mostly make strong India Pale Ales.

So let's say you blew all your money riding the mechanical bull at the Rodeo Lounge (121 Ilsley Avenue, 468-6666) in Dartmouth and you can't afford your cab fare back to Halifax. Though you might feel like you're shit out of luck, Halifax business journalist and Dartmouth native Paul McLeod suggests that you're not totally. "Bars close in Dartmouth after 2am so unless you have a house party to go to, your best option is to embrace a sketchy activity," he explains. "Kick back, climb up the Peace Pavilion and smoke a joint. Or just head down to the waterfront, enjoy the beautiful Halifax skyline and hook up with your cherished partner/stranger from Whiskey's Lounge" at 27 Portland Street, 469-7743.

Make your own fun

Unless it's a special holiday, the city's noise bylaw technically forbids fireworks in residential areas. Nevertheless, the 24-hour Needs on Windsor Street sells a wide variety of fireworks. I asked my pyromaniac ex-boyfriend for tips for anyone who'd like to enjoy a late night spectacle:

"If you want something gigantic and spectacular that will last all of 20 seconds, get The Menace," he divulges. "It's 30 bucks and it's one of the biggest explosions you can buy in Canada. It looks like the gods are shitting fire."

Or head to Chocolate Lake (on Herring Cove Road) for a late-night dip. It's the closest lake to downtown. Just make sure you're not so hammered that you asphyxiate in the water, and watch out for drunk teenage hooligans.

Finish off your night at The Ardmore Tea Room (6499 Quinpool Road, 423-7523) which opens at 5am for its geriatric patrons. There's no sweeter end to an all-nighter than their delicious fish cakes and their thick, old- fashioned milk shakes.