The inaugural literary festival aims for inclusivity and intersectionalism.

by Jade Nauss and Morgan Mullin 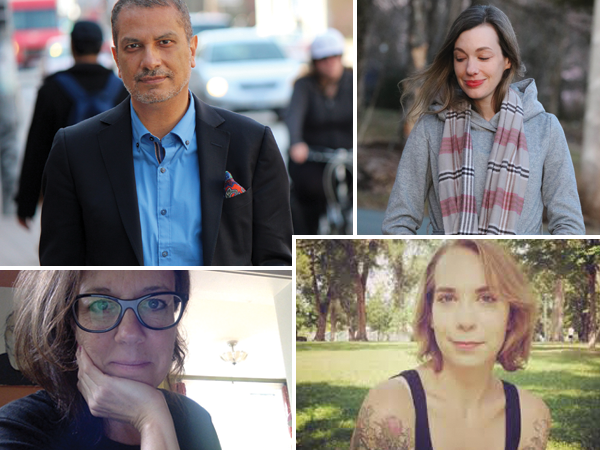 A fterWords is a brand-new multi-day literary festival with an emphasis on representation and accessibility.

Local literati mainstays Stehpanie Domet (a Coast contributor) and Ryan Turner have been talking for years about starting an international literary festival here at home. But recently the pair teamed up with local professional writers Sue Goyette, Stephens Gerard Malone and Rebecca Thomas to made it happen.

The group has programmed a festival with live readings, panel discussions, interactive workshops and celebrations with food and drink. They anticipate long conversations about books, ideas, why readers read and why writers write. And, they hope a wide array of people will join them and engage in those conversations.

"There's been an idea of privilege in literature—like the whole cannon thing—and we're trying to disrupt that," Sue Goyette, a fest board member, explains. "We need storytellers—that's what adds dignity to what we go through. It's essential to cross-pollinate and to listen."

To that end, the festival features writers of different ethnicities, identities and experiences. Included in the lineup are journalist and memoirist Kamal Al-Solaylee, a gay man who grew up in the Middle East; poet and essayist Gwen Benaway, a transgender woman of Anishinaabe and Métis descent; and local poet Jaime Forsythe, a mother with an expanding family. The lineup certainly isn't homogenous.

"I stood with our community at Friday's climate march and so may of these great young leaders we gather hope from spoke their minds—and the spoke in poems," Goyette adds, saying ours is an age where poetry and storytelling is a salve. To her, everyone has a spot at AfterWords. (Goyette will also be hosting a poetry panel at Spatz Theatre on Friday as part of the festival.)

Organizers worked to eliminate as many physical and financial obstacles as possible. They've made sure that all the venues—from Halifax Central Library to Bus Stop Theatre—are wheelchair accessible and equipped with gender-neutral bathrooms. They've secured ASL interpreters for select events. And they've arranged it so more than half the programming is completely free to the public.

"In this time we're so commodified," Goyette says. AfterWords promises to be "a time to listen to stories and the human side of us: The ear that listens to stories, the heart that softens to stories. These things have been delegitimized in our scheduled, commodified society."

Goyette says poetry and prose are vibrant and affordable mediums. "A book costs about as much as three fancy coffees," she says. Her hope is the festival will be food for the mind and the soul. "We're all wanting to lean in when it comes to reuniting with our vital selves."

Correction: An earlier version of this story incorrectly called Goyette a festival chairperson, rather than a board member. We regret the error.