She’s begun her descent into inevitable death, but the legacy of the famous Halifax Public Gardens agave plant will live on. 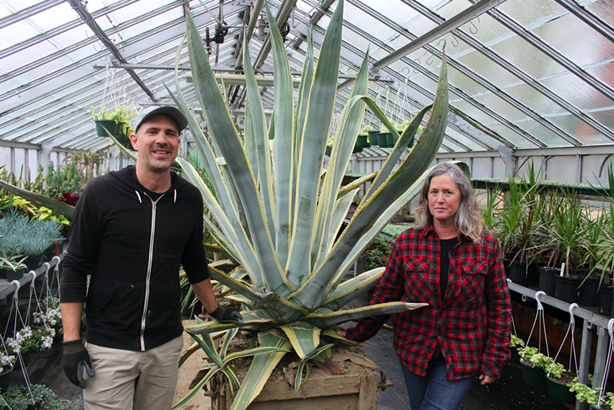 JENNIFER LEE
Sheldon Harper, the gardener who discovered the bloom and Heidi Boutilier.

Almost two months have passed since Agave americana became a part of the Haligonian vernacular after a decades-old agave plant in the Halifax Public Gardens sprouted its once-in-a-lifetime bloom.

The massive succulent surprised gardeners and caught national media attention, sparking a ‘will it or won’t it’ debate on whether or not it would flower since its rapid growth basically stopped when it was moved outside.

It’s been one hell of an emotional roller coaster.

“I think she’s living her life and she’s doing what she would normally do,” says Heidi Boutilier, the supervisor of Horticulture West for the city. Though the plant is neither male or female, Boutilier and the Public Gardens staff lovingly refer to the 450-pound giant as ‘she’ and ‘her.’

“She might still bloom,” Boutilier says. “There is still activity going on at the tip, even though she hasn’t grown any higher, there is a lot of people who think she’s still going to flower. I’m getting just because it’s been so long. But she still could, she still can and I’d be ecstatic if she does.”

But the asparagus-like stalk that shot out of the middle of the plant is a bitter-sweet sign. Agave plants only bloom once in their lifetime and after putting out the flower, she will drop her seeds and die.

They plan to watch her progress to the bitter end, despite the handful of offers from local distilleries to harvest the plant and turn her nectar into tequila.

Boutilier also had inquiries from local gardeners about the seeds from the flower to let her legacy live on. But the plant already has tons of offspring.

The famous agave has sprouted many children, grandchildren and even great-great-grandchildren.

“We have vegetative offspring from that plant in greenhouse one,” says Boutilier. “That will be planted outside and maybe will become as big as she has.”

Boutilier says in the past, only two of HRM's agaves have bloomed but the stalks were cut off. She wasn't willing to do that this time.

“I tried to procure a spot for her indoors, somewhere that had cathedral ceilings,” she says.

But, as we know, the plant outgrew the greenhouse, and despite attempts to find a new indoor space to keep her warm, she had to be transported outdoors.

“We literally had a day to try and get a spot for her,” says Boutilier. “She was growing six inches a day, and by the time we realized what was happening and how fast she was growing, I think we made the best choice that we had as far as our options.”

But a recent cold snap has people questioning whether or not she’ll flower at all. Boutilier looks forward to seeing what happens either way.

“If it’s stunted the growth of the mast so she doesn’t mature to her full height and still flowers, or doesn’t either way, we learn something about it botanically. I think that’s worth something.”

This past Friday, the agave was joined by her ‘brothers;’ two variegated agaves that will flank her side for her final days.

The Public Gardens is also home to some equally spectacular plant species.

This year, the Gardens has grown miniature pomegranates, a coffee plant and a fruit-producing pineapple plant, which, like the agave, only flowers and produces fruit once in its lifetime.

And thanks to the agave hype, the Public Gardens will start featuring a ‘Plant of the Month’ on its website to continue the interest on the fascinating garden they’ve grown.

Six student-friendly houseplants that are cheap and easy-to-find