Registration and annual fee for users to give province a better idea of who is using—and earning—from the platform. 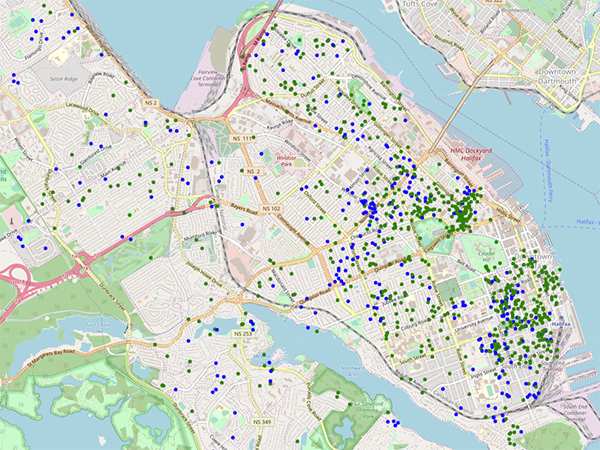 This month the province of Nova Scotia released the Tourist Accommodations Registration Act—which will require anyone operating a short-term rental that isn't their primary residence—to register with the province and pay a petite fee.

The point of the regulations, says minster of business Geoff MacLellan, was to "level the playing field" for the tourism industry.

But, Thorben Wieditz from Fairnb Coalition—which works to increase and improve regulation of Airbnbs across Canada—says Nova Scotia's registration doesn't do enough to address the negative effects of Airbnb.

The annual fee for listings that aren't a primary residence—which a study by David Wachsmuth at McGill University estimates is about half of all listings in Halifax—ranges from $50 for a unit with one to four bedrooms, to $150 five or more. Meanwhile, platforms like Airbnb pay only $500, which Wieditz says is "literally nothing. Five-hundred dollars for a platform to operate, that's just a nominal fee."

To give some perspective on the nominal fee, from September 2019 to August 2019 listings in Halifax earned $30.9 million, and, Halifax's new proposed rules around ride-hailing apps suggested a $25,000 one-time and a fee-per-trip charge for platforms.

Right now, exactly how the registration will be verified hasn't been sorted out, but Wieditz says efforts for voluntary compliance have failed in other areas in Canada—which MacLellan says is part of the reason why the provincial government is currently working on it.

And it's true, that for some Nova Scotians, Airbnb has been a godsend—a way to earn extra cash on their renovated basement apartment (with one of your friends/ and the tap drips all night/ Water torture in the sink/ The furnace is burning/ But it's still cold I think) or that drafty cabin in the woods they own inviting pseudo-adventurous couples to remind themselves why they like each other and post an Instagram about it.

But that same study from McGill said that short term rentals have removed 740 housing units from HRM's long-term housing market, and Wieditz says the registration won't do anything to improve that—especially since the mechanism to enforce the registration hasn't been figured out yet.

"Right now this platform is a phenomenon that is growing," says MacLellan, and that the province is wrapping regulations around it that "address the imminent needs."

Drawing a direct correlation between increasing rents (up by 3.8 percent) Halifax's dangerously low vacancy rate (one percent)and the huge increase in Airbnb units (19.2 percent from August 2018 to September 2019)should be done with a grain of salt. New housing development not keeping up with rapid (and record-breaking) population growth is making the pinch on supply work in favour of property owners and landlords—who can take their pick making big profits with long term renters or Airbnb. But the losers, are often low-income renters getting priced out of their neighbourhoods.

HRM is looking at its own by-law to regulate short term rentals in the municipality. Staff say the report is well underway and should be presented to the Community Planning and Economic Development Advisory Committee this Spring. A survey that is informing the report got 4,000 responses—one of the most active to date.

MacLellan said that ultimately the municipalities will have the ability to do what they think is best when it comes to regulating short-term rentals like Airbnbs. "We're not in any way, shape or form...looking at diminishing the powers of municipalities."