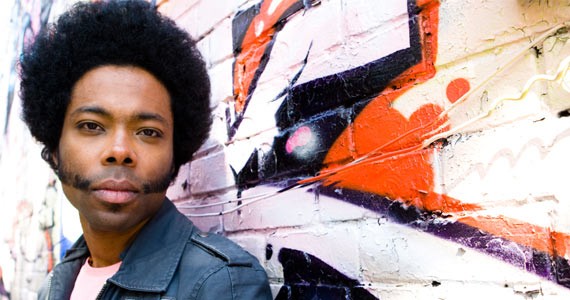 Alex Cuba (AKA Alexis Puentes) moved to Canada for love, but so far, the sentiment is unrequited. "It's not a secret that there is no market for Latin music in Canada. Anything I do will be considered world music, but world music has a very small-minded way of thinking about music," says the Smithers, BC-based artist.

Alexis Puentes grew up in Cuba and immigrated to Canada with his brother in 1999 after meeting a woman, playing as the Puentes Brothers before Alex went on to release his debut solo album in 2004. Sometimes erring on the rock side of pop, sometimes reggae, sometimes hip-hop, Puentes has got a sound that's hard to pin down.

Make no mistake: people must like whatever his particular mélange of sound is, because Puentes has won two Junos and a Latin Grammy, but says he hates being branded world music just because the lyrics aren't in English. "The Junos don't see that in the category of world music, if you have an ethnic background and music in your mother tongue's language, the Juno will nominate you and call it world music. When are we going to start recognizing what's being made here, in Canada?"

Although he doesn't like to be boxed in by genre, Puentes says he's developed a tough skin since he's been making music. "What I am always trying to do is block from my mind any exterior influence in regard to genre or expectations that people may have of you," he says.

Now Puentes is ten years in and four solo albums deep—the most recent of which is called Static in the System—not to mention big into co-writing for the likes of Nelly Furtado and extensive touring around Canada, the US and Latin America. Speaking from Los Angeles, Puentes has hit stops in Germany, central Canada and California so far, and is about to make his way down to Miami.

"I'm constantly working on different things—I'm working with other artists in the US, Latin America and Spain, doing some writing for them…there's always something on the go," he says. "But I enjoy downtime with my family, riding my motorcycle and playing with my kids."

His next goal? Being recognized for what he is. "I've created the kind of music right here on this ground that Canadians can now call Canadian music. It references where I come from, but also where I am at the moment."