Katie Crutchfield, maker of one of last year’s best records, is taking that buzz and going home. 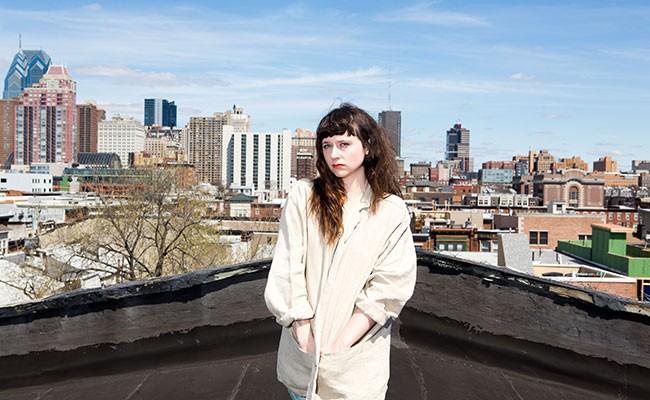 Katie Crutchfield has just packed up her apartment in Philadelphia—if you follow her on Instagram, you've seen its walls as pink as Lady Bird's bedroom—and will take her things back to the place she was born: Birmingham, Alabama.

Somewhere in there, before a solo tour of Texas and a string of full-band dates with Jawbreaker, she'll visit Halifax for In the Dead of Winter.

Crutchfield and her twin sister Allison ("If I say 'we,' it's usually me and Allison," she notes), who have just turned 29, spent some of their formative musical years in Pennsylvania with their respective bands, Waxahatchee and Swearin', though they started together as teenagers.

"When we lived in Birmingham when we were younger, we were outspoken about a lot of political stuff," says Crutchfield, whose stage name comes from a creek in her home state. "Specifically, we were combative about all the sexism and general injustices in the music scene, and it felt like we were swimming against a huge current all the time. We started to tour and travel around and we realized there were these pockets of people in other parts of the world that felt the same way as us. And in New York it was the majority of the scene, those were things people were really passionate about. So it was 'We're gonna go to this place where there are like-minded people, and we're gonna make music with them, cause that's gonna feel better.'"

They moved from Brooklyn to Philadelphia because it was cheaper, and happened to land in an indie-rock renaissance—Kurt Vile, Hop Along, The War on Drugs and Strand of Oaks are all from there, though they created their own scene.

"There's so much cool music coming out of it and so much attention is on Philly at the moment. But the thing about it is my Philly—the scene I felt part of—it just kind of isn't there anymore," says Crutchfield. "When I first moved there, Swearin' was a band; Waxahatchee's band and Radiator Hospital, we were all kind of under one roof. It was an amazing time, and all those people are still my family. But we all went in different directions. And that time and place have passed for me." (Allison, who is also a Merge Records artist, has moved to Los Angeles.)

With the return comes, Crutchfield thinks, a change in musical direction. Though her lyrics have been piercing and thoughtful and revealing no matter the instrumentation, arrangements have grown larger and more detailed with each record. Her debut, American Weekend, is all intimate bedroom recordings; her fourth, Out in the Storm, was produced by John Agnello, a full-blown rock album.

"My favourite music I've ever made has been really rooted in the South, and in that music, in country, something that's back to my roots," she says. "Music I first felt passionate about. I don't really know what the next Waxahatchee record is going to sound like. I've written a few songs and I'm gearing up to explore a new thing. Out in the Storm felt like this rock record that I really wanted and needed to make, and I'm just super-ready to go in the opposite direction for the next one."

Her Halifax show this week is one way to explore that. "I'm going to be play a lot of those songs but it's going to be really exciting for me, cause it's gonna be really different than what I normally do," she says of Friday's IDOW slot. "I feel like it was a pretty exhausting record cycle, strangely—it was actually sort of short, the touring, but it was so much crammed in. My relationship with the record is I've been trying not to listen to or think about it until I have to do it again," she says, laughing. "And then I think I'll have my big second wind with it. But we played those songs every night for like 100 nights in a row.

"That's kind of the bread and butter of being a songwriter, I think," she says. "Being able to reinterpret things and make them new, just for you."

"Air" (Ivy Tripp, 2015): Ironic that a track called "Air" leaves you breathless—on the choruses Crutchfield pulls single words out of the core of the earth and stretches them until they snap.

"Blue Pt.II" (Cerulean Salt, 2013): Doubled vocals and guitars are the entire arrangement on this tour through a relationship that's clearly sagging even as Crutchfield insists she'll wait—and stay—forever.

"Catfish" (American Weekend, 2012): The first song on her first record—spare, bare and a heartbreaker—immediately demonstrates Crutchfield's equal adeptness with both lyric and melody: "Catfish" places us late on a sweaty night, melancholy and doomed, an entire movie in four minutes.

"Silver" (Out in the Storm, 2017): The first single from Crutchfield's best-of-'17 topper is a jangly 90s-leaning ripper that's probably most demonstrative of her Rilo Kiley fandom (now peerdom)—it wouldn't be a stretch to hear Jenny Lewis sing, "You tell a classic story smothered underneath formality / I'll portray the old shag carpet, you can walk all over me."

"Swan Dive" (Cerulean Salt): A propulsive beat pushes Crutchfield's gently regretful words along, then drops out for the most devastating part: "You hold onto the past / you make yourself miserable / and I'm ruled by seasons / and a sadness that's inexplicable."