All eyes on Alexa Pope 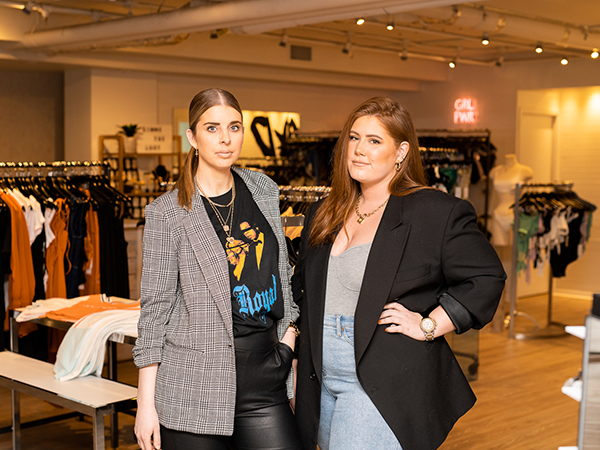 If you want to know what it takes to be a boss just ask Marianne Thomson and Lauren Wambolt. The owners of Alexa Pope, one of Halifax's trendiest fashion retailers, recently expanded their store on Lower Water Street. It's a chic setup complete with minimalist vibes, marble touches, hints of pink and well-placed greenery that make it a retail-lover's dream.

Six years ago the duo launched their online store with the aim of catering to the fast-paced trendsetting clientele. They confess their journey was not an easy one.

"I think what I realized after starting a business is that it was a lot harder than I thought and it's hard to make money," says Thomson, who was born and raised in Dartmouth.

Rocking a plaid blazer, high-waisted black pants and black sneakers, she says, "We started the business with our own money. We didn't get loans from anybody. We quickly realized if we keep paying ourselves money we're never going to grow our business because we didn't have a lot of inventory."

Reflecting back on the tougher times, they now laugh.

"We've worked for oil companies doing dispatch at night, we worked for lawn-care companies," says Thomson. "These were jobs we got that were great that we could use to work around our schedule so we could give our all to Alexa Pope."

That hard work has paid off. Now Thomson and Wambolt have staff members and successful online and physical stores. Thomson credits the strengths in their different backgrounds as key contributors to their success.

"Lauren is able to maintain the highs and lows a little bit more than I am," she says. "I am the operations side of the business so I do the bookkeeping so that is why I'm not as sane." Thomson graduated from Acadia with a degree in business before studying fashion merchandising and management at the Fashion Institute of Technology in New York.

"In high school, I didn't really know what I wanted to do," says Wambolt, who pursued a degree in photography at Nova Scotia Community College. "I went to school at SMU for six months and literally hated my life. It was not for me. I kind of always had a thing for photography so I was debating between NSCC and NSCAD. NSCC was more business-focused, so I thought why not go with that route?"

Before launching their online store, both she and Thomson were working at Victoria's Secret on the management team.

"Being an entrepreneur, you are on a rollercoaster of so many highs and so many lows—there is no consistency to it," says Thomson. "That is the hardest part.

"Organically, with the trendy clothes that we carry, we tend to attract a girl who is on social media probably as much as we are, looking at the trends," she continues. The Alexa Pope end goal is to get local fashionistas out of their comfort zone.

"I've been that girl, where you show up wearing something different and you feel like there's 100 pairs of eyeballs looking at you," says Wambolt, laughing. "The biggest thing we get for feedback is 'I have nowhere to wear this.' Maybe Halifax is a city that we should start promoting as having more events and having more things where people feel comfortable to step outside their box."

Tough times in the retail woods