All eyes on Sipekne’katik First Nation

by Maureen Googoo and Caora McKenna 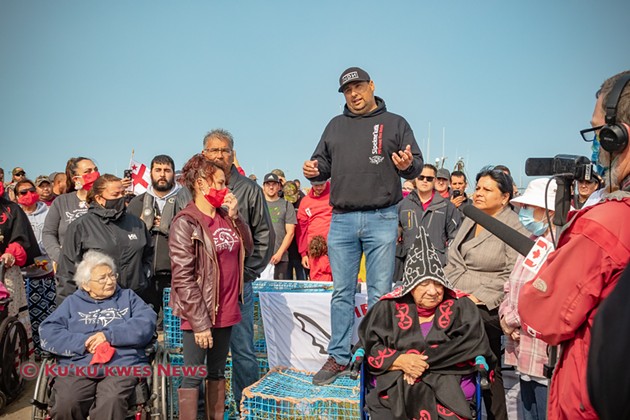 First, an introduction: Maureen Googoo has been working in news for more than 30 years. The journalist from Indian Brook First Nation—Sipekne'katik—has been covering Indigenous communities for an Indigenous audience since 2015 through her independent publication, Ku'ku'kwes News.

She covered the clash between Indigenous fishers practising their right to a moderate livelihood in Burnt Church, New Brunswick 20 years ago, and she was on the ground in Saulnierville, Nova Scotia at the beginning of September, after the DFO seized Matthew Cope's traps at the end of August.

When tensions rose between Indigenous fishers and settler fishers, with video of traps being cut and flares being thrown getting shared to TikTok, and racist slurs began to grace our Facebook timelines, she was there, too, keeping her audience—and the country—informed.

Her article "Nova Scotia First Nation launches its own moderate livelihood fishery" is an important look at what's going on. We're proud to share it below, in partnership with Ku'ku'kwes News. —Caora McKenna, Coast news editor 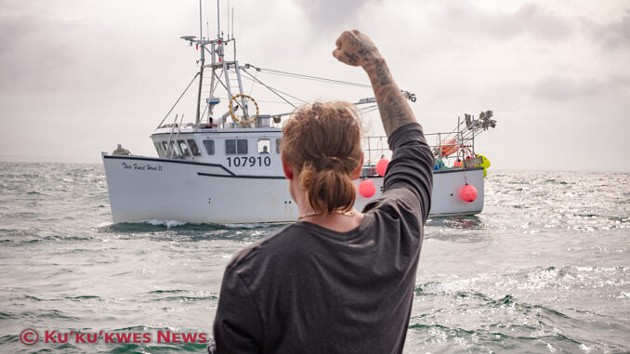 The official launch of the new Mi’kmaw-managed fishery took place on the federal wharf in Saulnierville, NS. Approximately 300 people gathered at the wharf to show their support to the Mi’kmaw lobster harvesters who were issued licenses and tags under the new fishery.

“We went through a process that took us years to get through. We got community input. We put a plan together. We’re going to enforce our plan and have a successful moderate livelihood fishery,” Chief Sack said.

The first community member to receive a license and tags under the new fishery was Randy Sack, the son of Donald Marshall, Jr. Marshall passed away in 2009 at the age of 55 from complications of a double-lung transplant he received in 2003.

“My dad would be proud of me right now,” Sack said after receiving his license and tags. “I’m feeling pretty good, yep,” he added.

Robert Syliboy was another community member to receive a community-issued license.

“It was actually a really emotional experience for me. I had my son here with me. He’s going to be four years old in 10 days,” Syliboy explained while taking a break from loading traps onto one of his friend’s boat.

“Everything we do, we do here for our future. And for me, it was empowering,” Syliboy said.

Sipekne’katik Chief Michael Sack confirmed his First Nation issued a total of seven lobster fishing licenses, with 50 tags for each license, on Thursday. He said more licenses could be issued if community members requesting them meet the First Nation’s criteria under the new fishery.

According to a community notice dated September 14, the “Sipekne’katik Rights Implementation Fishery” incorporates the Mi’kmaw treaty right to earn a moderate livelihood by catching a selling fish. In addition to issuing lobster licenses to band members, the First Nation also plans to issue lobster buying licences through a community truckhouse or trading post, which is also part of the Peace and Friendship Treaties of 1752 and 1760-61.

The treaty right to a moderate livelihood through the fishery was affirmed in the 1999 Marshall decision by the Supreme Court of Canada. Donald Marshall, Jr. was charged with illegally catching and selling eels in Pomquet Harbour, NS in 1993. The Membertou First Nation member fought the charges in the lower courts, arguing he had a right to catch and sell fish without a license under the Peace and Friendship Treaty of 1760-61 signed between his Mi’kmaw ancestors and the British Crown.

Marshall was convicted in the lower courts in Nova Scotia. He appealed the decision to the Supreme Court of Canada which agreed with his legal argument and overturned his conviction on September 17, 1999. The ruling also urged both sides to negotiate, not litigate, treaty rights.

However, the high court also issued a rare clarification on the Marshall decision two months later, stating that DFO can regulate the treaty right for conservation or other important public objectives.

In the notice, the Sipekne’katik leadership explained that since the Marshall decision 21 years ago, DFO “has done nothing to recognize the treaty right to harvest and sell for a moderate livelihood.”

According to the notice, the community’s moderate livelihood fishery will serve as a test so the First Nation can collect data and conduct analysis the number of members who are fishing, the number days they fish and the amount of traps they set in the water. To date, there has been no exhaustive study on a moderate livelihood fishery since the 1999 Marshall decision.

Sipekne’katik’s launch of its own fisheries was met with opposition on the water in St. Mary’s Bay on Thursday. A flotilla of fishing boats belonging to non-Indigenous lobster harvesters gathered on the water just outside of the Saulnierville Wharf in an apparent attempt to prevent the Mi’kmaw harvesters from dropping lobster traps in the bay.

A helicopter belonging to the RCMP hovered over the wharf area throughout the afternoon.

Fishery guardians with the Sipekne’katik First Nation met the flotilla on a zodiac and remained between them and the Mi’kmaw-owned boats while harvesters set their traps. Harvesters later said the buoys attached to their traps were cut shortly afterwards.


“Our issue is not with the commercial fishermen,” Chief Sack said. “We have an issue with the levels of government that are not upholding our rights.”

In a written statement to Ku’ku’kwes News, DFO Minister Bernadette Jordan said “there cannot be a commercial fishery outside the commercial season” until an agreement is reached between the First Nation and her department.

“A sound management framework is necessary for the management and conservation of fish stocks,” Minister Jordan said.

Jordan said she is “in communication with First Nations leadership to find a collaborative path back to the negotiation table.”

“I want to be clear that DFO continues to address unauthorized fishing,” Minister Jordan wrote. “Fishing without a license is a violation under the Fisheries Act and anyone fishing outside the activities authorized under a license may be subject to enforcement action,” she added.

In regards to setting up a truckhouse to issue fish buying licences, Chief Sack confirmed the First Nation is in preliminary talks with the Province of Nova Scotia.

“It’s something we’re still working on. We’re not as far along in that process so we’re hoping that we’ll finalize that soon,” Chief Sack said.

In a written response to Ku’ku’kwes News, a spokesman for the Nova Scotia Department of Fisheries and Aquaculture said the province is letting DFO take the lead on negotiating a moderate livelihood with the province’s First Nations.

The spokesman also explained that the Fisheries and Coastal Resources Act “establish the rules and licensing requirements for buying fish in the province based on DFO’s identification of what are licensed licensed commercial fisheries.”

“As a province, our regulatory responsibilities are around health and safety to protect consumers, quality of the product, and the orderly development of the seafood industry that supports the economic sustainability of seafood businesses and the communities they support,” the spokesman wrote.

On Wednesday, the Assembly of First Nations sent a letter to DFO Minister Jordan in support of Sipekne’katik members’ pursuit to earn a moderate livelihood from the lobster fishery.

In the letter, AFN National Chief Perry Bellegarde urged Minister Jordan to protect the Mi’kmaw harvesters while they fish and meet with Mi’kmaw leaders in Nova Scotia “to ensure that there is an immediate resolution to this civil unrest.”

The Assembly of Nova Scotia Mi’kmaw Chiefs issued a news release on Thursday to also mark the 21st anniversary of the Marshall decision. In it, the chiefs said they’ve “been met with obstacles for moving forward” in their negotiations with DFO on moderate livelihood.

The chiefs say the options proposed by DFO “continue to infringe on our treaty rights.”

Independent media like Ku’ku’kwes News is essential for important news coverage of Indigenous issues in Atlantic Canada. Support it by going to to Patreon.com/Kukukwes and becoming a monthly patron/subscriber.