Fresh feasts: Food at Hogwarts tends to be heavy with limited variety. What if that was the only thing available at your school? A group of Dalhousie students offer an alternative. 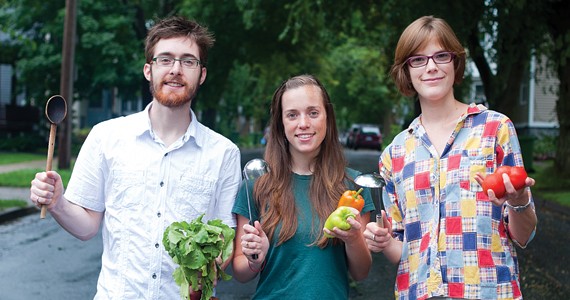 In the dusky August sunshine, eight Dal students sit in a living room on Cedar Street debating the finer points of garlic presses.

One insists they are a godsend to harried chefs. Another retorts, "A garlic press is too bourgeois!"

They are The Loaded Ladle, a food co-operative preparing for its first semester as a student-funded service.

With no Dobby-like house elves to help them, the students are scrambling to buy thrift store cutlery and coordinate volunteers in preparation for their next meal on September 4.

The group is about more than just food, says volunteer Sonia Grant. "The Loaded Ladle is doing a few things," says the international development student. "One is trying to provide healthy, ethically sourced food for students. The other is making a broader political statement opposing corporatization of universities, of food systems...and trying to build an alternative in a participatory way."

In March, 72 percent of Dalhousie students voted in support of the food service. Now all full-time students pay $2 a year in exchange for "free" meals once a week in the Student Union building, along with workshops about sustainable food practices.

The estimated $26,000 raised by the levy boosts The Loaded Ladle's budget; they once relied on donations and the enthusiasm of volunteers who would remove their shirts for improvised open mitts.

The Loaded Ladle has come a long way since its predecessor, Campus Action on Food, was founded in September 2009. To protest food contracts with corporate caterer Sodexo, the group served free meals out of Tupperware containers in the Student Union Building. This violated the Student Union Building's exclusivity contract with Sodexo and prompted security to shoo the covert chefs out of the building. Though this strained the relationship between the student union and The Loaded Ladle, following a student election in March 2010, the Ladle gained some allies on the student union's executive.

"Food is something that is becoming more and more important to students," says current Student Union president Chris Saulnier. "It's probably the thing that I hear about most in my job---students caring about the quality of food that they're eating around campus."

The engineering student says the student union is also considering operating its own food service to give students healthy and affordable edibles, and is considering not renewing its corporate contracts for food services in the SUB.

"We saw an ethical problem with students having their money taken from them to support an organization with political goals without their consent," says Kennedy. "We felt like any kind of fee or donation to an organization like The Loaded Ladle be done voluntarily by students."

Kennedy's group also says The Loaded Ladle's business plan is flawed. Ladle volunteer Alexander Gopen says having a profitable business was never the goal of the co-op."We are not a business, we are not trying to make money," says the aspiring farmer. "Of course, we do want to be able to sustain ourselves and not collapse because we don't have money. So there is a little bit of an issue there."

No Hogwarts-style steak and kidney pies here---The Loaded Ladle relies on seasonal produce from the market and legumes from The Grainery Food Co-op to fill students' bellies with vegetarian eats.

As the meeting wraps up two hours later, talks turn back to the co-operative's real focus: the food. After much debate, The Loaded Ladle decides to serve bean burritos to this year's frosh. As a co-op, all the Loaded Ladle's decision are based on consensus.

"It's important for us that we all have a voice in the organization even if that means our meetings run a little bit late sometimes," says Grant, sheepishly.

There is bantering about the ingredients of the burritos, focusing on another crucial issue: the flatulence produced by students unaccustomed to hearty bean-filled meals.

A worried Kaleigh McGregor-Bales asks the inevitable question: "What if we have farty frosh?"