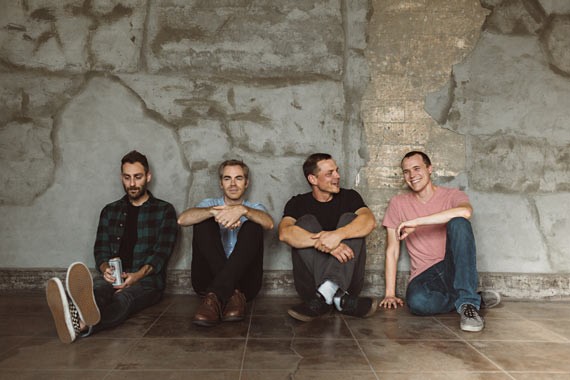 The first time Steve Lamos found out his college band, American Football, was popular was about 15 years after its album was released. Lamos is a professor at the University of Colorado, and one of his students off-handedly asked him if he knew that the song “Never Meant” had over 2 million plays online.

“That was the first time I thought, ‘whoa, where the hell did that come from?’” says Lamos. “No one gave us the time of day back in ’99.”

American Football’s success was unplanned. From 1995-’97, the bandmates wrote songs together while simultaneously attending college in Illinois. Lamos says their music wasn’t seen as much more than a side-project: just three guys in their 20s, dabbling with music. They couldn’t have predicted their sound would come to characterize the emo genre of the late ‘90s and 2000s.

Before recording their only album, the guys had already decided to break up. They went ahead with production anyway, and released the album in 1999, but never toured it.

Skip ahead 14 years, when each band member has moved onto their own successes and separate lives. Mike Kinsella (the band’s singer and guitarist) is thriving as a solo musician, recording under the name Owen. Lamos is a prof, and guitar player Steve Holmes works in computer science. American Football, the band, is a distant memory, and if Lamos ever thinks about American Football the record, he pictures it in a dusty corner. He can’t imagine what is actually happening.

“I guess it was the power of the internet,” laughs Steve Lamos. “Or magic.” tweet this

It turns out that something about the album’s raw emotion and haunting instrumentals has withstood time, and over the years it built up an enormous cult following. In 2014, the group was approached and asked to headline a show. The band had never before considered reuniting—it wasn’t in the cards when the album was released, and certainly not predicted more than a decade later.

“The reunion was a big surprise for everybody,” says Lamos. When that show sold out instantly (literally, in 30 seconds), Lamos says they finally realized what sort of following the defunct band had. “Evidently there was a big demand for this music.

“I guess it was the power of the internet,” laughs Lamos. “Or magic.”

American Football officially reunited in September 2014, and has been riding this unexpected wave on and off since then. The album was re-issued that same year, and Kinsella’s brother, Nate, joined the group.

The band members all have young families at home, Lamos says, and each their own projects and jobs. So the “reunion tour” hasn’t been constant.

“It’s kind of like a vacation,” says Lamos. “It’s been these long weekends of goofing off. We’re pretending that we’re younger than we are.”