After 15 years at Dharma Sushi, Goto’s made the transition from server to chef to owner—and she couldn’t be more excited about what’s next. 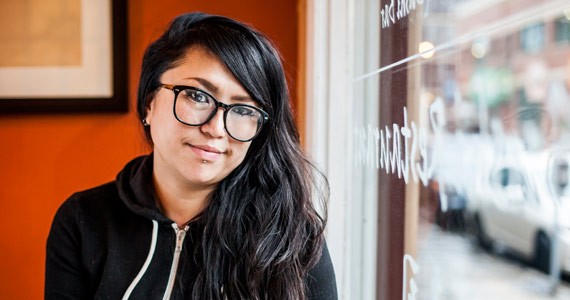 Ami Goto was hired as a server at Dharma Sushi five days after she arrived from Japan in 1998. It was her first foray into restaurant life and, in the beginning, just a way to pay her bills. Flash forward a few years and her boss, Hideki Yamamoto, had recruited her to join him in the kitchen, giving her the opportunity to learn more about traditional Japanese food. Then he dropped the bomb—he was selling the restaurant, moving to BC and wanted Goto to take the reins. Overwhelmed at first, she graciously declined. "A year passed and I kind of started to feel weird about him putting it on the market. I was like, I think I'm the only one who can do this," says Goto. "I just didn't want anyone else to take that restaurant that I love. I wanted to protect it." Since taking over this spring, she says her main focus has been maintaining the quality that Dharma is known for, but the more comfortable she gets the more she thinks about renovations and evolving the menu. "I just started feeling like, it's my restaurant now. I'm ready for change."