And round and roundabout we go....

The city wants to replace two North Park Street intersections with roundabouts, but will the public buy it? 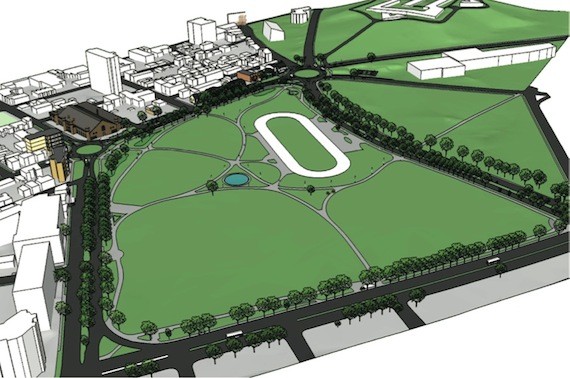 Wednesday night, the city held a public information meeting public input meeting Ideas Expo "shape your city" exercise, to do something or another about the proposal to put two roundabouts on North Park Street.

Does that sound cynical? Well, it is. I'm not sure what the point of these things are. Used to be, we could just stick an open microphone in the middle of a room, and a bunch of old cranky dudes would get up and rant like Abe Simpson, and city officials would dutifully take copious notes, assure the crowd their input was valued and would be considered, and then ignore it all and do what they were going to do anyway.

Nowadays, however, they still go and do what they were going to do anyway, but first they go through this elaborate routine of paying some dude to play woo-woo music (think: something along the lines of what a massage therapist plays, light ethereal guitar music, Celtic lilts or anything with fiddles), breaking the crowd into little groups where they draw pictures on post-it notes, pay a bunch of hippies to be "coordinators" and make rhyming couplets to hip hop music that clashes with the dude playing woo-woo music and, above all, don't let any cranky old dude get anywhere near a microphone, all in the name of "taking you seriously," or whatever the buzz phrase is this week.

The woo-woo express is epitomized by Tim Merry, who billed a hefty $400,000 for the convention centre consultations, and sure enough, the city hired Merry's assistant Rachel Dera to woo-woo us into roundabout complacency.

Understand that we're now eight or nine steps beyond the 2009-era "World Cafe" woo-woo-y-ness. It's hard to keep up with the lingo, and even potential woo-wooers are getting lost in the verbal inanity as they try to out-woo-woo each other. None other than former city planner Andy Filmore recently coined the phrase "Ideas Expo" because "world cafe" is so last decade, and "public input meeting" is like wearing running shoes with your knee-length skirt.

I can't witness these things anymore without thinking there's a gigantic gravy train, with connected insiders getting the big consulting bucks. It's all a big joke on the taxpayer: we and ours will rake it in, all while pretending to give a shit what the public thinks, then we'll run over to the Shoe and run up the expense account.

Let's be clear: the roundabout plan for North Park is completely sane, and the most logical solution to the disaster that are the two intersections—Agricola/Cunard to the north, and Rainnie/Cogswell to the south. Those intersections are bad for drivers, and they're doubly bad for pedestrians. It's hard to see how they could be made any worse than they are now, and even a badly implemented roundabout plan would be an improvement. The trick is to get the best design.

I hope that city officials do ignore all the public input, and just build what they think best. I fear they'll listen to some of the input and screw it all up.

City officials' presentations Wednesday were overly long and full of touchy-feely buzzwords and such (you can watch them here), but they seem to be designing a sensible set of intersections. In all probability we'll end up with single-lane roundabouts, with pedestrian crossings that are 10,000 times safer than what we have now. Bike lanes might be built into them, but probably shouldn't be, as the wider widths to accommodate the bike lanes will cause cars to go too fast through the roundabouts. North Park will be reduced to one lane in each direction, and the intersection with Cornwallis Street will be simplified, especially for pedestrians, who will have an island in between the two traffic lanes. With the reduced street width, a lot of land will revert back to the Common.

It's all a very sensible plan. I just wish we could get it straight up without the woo-woo crap piled on. Roundabouts are a regular, normal feature of European life. Being from Europe doesn't make them better, necessarily, and it's annoying that anything European gets instant buy-in from the woo-woo crowd, but you really can't ignore 300 million people navigating through roundabouts with a whole lot fewer problems than we have here in North America, without the roundabouts.

What explains the woo-woo? Mostly, it's just the normal bureaucratic obsession with the latest buzzwords and processes creeping into public meetings. But this roundabout case may be an extreme version of woo-woo in reaction to the unhinged anti-roundabout crowd. Maybe if we play enough calming woo-woo music, batter about a bunch of nonsense about "consultation" and otherwise befuddle the Abe Simpsons with post-it notes, they'll be confused enough to not mount a realistic challenge to our plans.

That unhinged opposition to roundabouts, incidentally, comes from the reality that the Halifax area has a horrific history with two supposed roundabouts. These weren't actual roundabouts, but really just poorly designed gigantic traffic circles that confused everyone, and were probably more dangerous than simply hanging a bunch of traffic lights.

We all know about the Armdale Rotary, recently renamed the Armdale Roundabout. The problem with the Rotary iteration was that it was far, far too big, with too big of a diameter of the circle. A tighter circle forces drivers to slow down, nearly, but not completely, to a stop; the wider the circle, then, the more dangerous. The Roundabout iteration is an improvement, but even that is still too big. I'm told that when the engineers were re-designing the thing, they wanted to make it a much tighter circle, but realized the political opposition was too great for that. So the Armdale Roundabout is a compromise, the halfway point between a really shitty Rotary and a well-designed roundabout. So not great, but not horrible either.

The other "roundabout" that long-time locals are familiar with is this monstrosity: 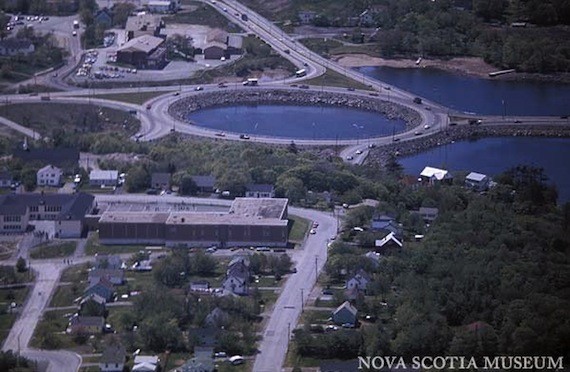 That's the Mic Mac Rotary, which was an engineering, traffic, social and aesthetic disaster. It too was far too large in diameter, and stupidly put in the middle of a freeway, filling in a lake. People were right to hate the thing. Thankfully, in the early 1990s it was pulled out and replaced with the so-called Parclo we have now, which is still confusing to people coming upon it for the first time, but a vast improvement all the same.

But the roundabouts planned for North Park are not anything like those two historic disasters. I'm confident they'll be properly designed, and once built a big improvement over the horror show intersections we have now.

I beg and implore the unhinged anti-roundabout crowd to trust me on this, if for no other reason than so the woo-wooers will move on to their next project, and so public officials can get back to ignoring the public and doing their jobs.

Assuming the unhinged crowd doesn't derail the proposal, the two North Park Street roundabouts will be approved by council, probably later this year. The idea is to replace the existing intersections in the next three to five years.