In Worthy of Love, the young poet’s debut novel, he tackles body image from a male perspective. 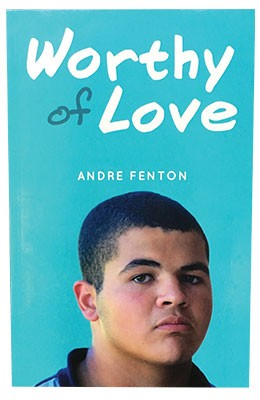 Andre Fenton wants readers of his debut novel Worthy of Love to know there's more to someone than their physical appearance. Having his own struggles with body image, he hopes to bring a new voice to the literary world.

"I thought it was an important story to tell for youth that feel underrepresented in the young-adult fiction genre," says Fenton. "There aren't enough books for young men, especially Black boys, who are struggling with poor body image, so I wanted to touch on that in the book."

Worthy of Love follows Adrian Carter, a mixed-raced teen from the north end who struggles with poor self-image and bullying. He decides to lose weight. When he falls for Mel Woods, a girl with a passion for fitness, he begins taking dangerous weight-loss measures and expressing his self-esteem issues in unhealthy ways which strain their relationship.

"Adrian believes his body image and how he looks makes him worthy," says Fenton. "Throughout the story, he's trying to unlearn that and know that there's so much more to him besides the numbers on the scale."

Fenton, an accomplished poet and aspiring filmmaker, has been developing Worthy of Love's characters since he was in high school. "I think that growing up while writing these characters," he says, "helped me to learn a lot about myself and I use those life lessons in the stories."

Entering a new and exciting chapter, Fenton is looking forward to a future he hopes includes new stories, characters and voices in Canadian literature.

"I hope they take away the idea of empathy," says Fenton of his own readers. "And also realizing that the things you do, and who you unload on, impacts other people."