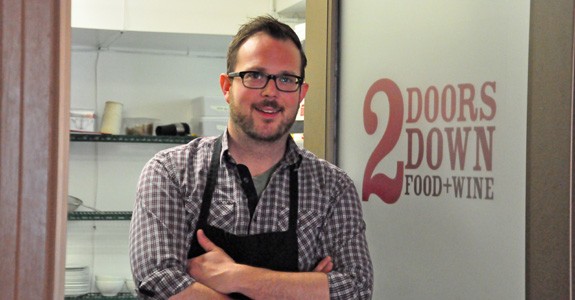 Andrew Farrell wears a uniform. It starts with a folded bandana wrapped around his forehead, replacing the stodgy pleats of a traditional chef's toque. He wears a black chef's coat over a pair of faded black jeans. A Moleskine notebook is tucked into a back pocket. And he almost always has a mug of coffee in his hand.

"People make fun of me because I drink coffee right until the end of service," he says. "But it keeps me sharp, I say."

It doesn't hurt to stay sharp. After all, you've got to be pretty keen to make it as a chef. It's a hard job. It takes stamina and dedication; it also takes a lot of skill. A good cook is a dime a dozen, but not everybody can be a chef.

Chefs like Renée Lavallée, Dennis Johnston, Craig Flinn and Luis Clavel have spent years at the craft, gaining name recognition, landing celebrated chef positions or opening their own restaurants. But for every Maurizio Bertossi there is a slew of line cooks who couldn't stand the heat, so got out of the kitchen. But there are also a few Andrew Farrells. Including, of course, Andrew Farrell.

"A lot of people that are young apprentices talk the talk but don't walk the walk," says Craig Flinn, the chef owner of Chives and the recently opened 2 Doors Down, where Farrell runs the kitchen as the chef de cuisine. "They want to work in one restaurant as an apprentice for a year or two and then it's 'I gotta get my chef position.' They don't put the time in."

"Nobody goes to culinary school thinking 'Oh my god, I cannot wait to be 43 years old making salads at the Westin or doing banquets and standing behind a line at omelet stations on Christmas morning,'" says Flinn. "They think of themselves as having a cookbook or a television show or walking through their dining room and getting applauded.

"It's such a gamble and the one thing that the few cooks like Andrew that have---yes they have knowledge, and yes they have passion and ability--- but they have patience. Andrew's been cooking for about 10 years. That means 10 years of walking into the kitchen and pouring a cup of coffee and looking at a prep list and organizing your stuff and standing on a line and cooking and yelling out orders and cleaning up and mopping up all sweaty and exhausted when you go home. That's 10 years of doing that before somebody like me says 'I want you to run this restaurant.' How many people would have tapped out at seven years or three years or six months? He's talented, but he's also committed to being a cook."

"It's just got to be really tasty," he says. "I value nostalgia in food, too."

That nostalgia is shown in the 2 Doors Down menu: spaghetti and meatballs, cheeseburgers and pot pies are all deeply rooted in home cooking and food memory. "My mom cooked all the time and she was always a great cook," he says. "You don't always appreciate how good a cook your mom is until you go and have some other mom's food. I think people around our age are getting back into food, but also wanting to know how their mom made something or grandma's recipes. There's definitely a place for fancier food, but I think a lot of people just want really tasty stuff."

It took a while for Farrell to find this point of view.

Farrell actually started off as a bit of a slave to that pretense, wanting to cook what he calls "fancy-pants molecular gastronomy food." But that changed quickly after he moved to England in 2006.

"I was like 'I want to get a stage at The Fat Duck, I really want to go eat at Gordon Ramsay,'" he says. "I started off really wanting the Michelin star stuff."

After working in a small gastropub in the middle of rural England with a chef whose fine dining aspirations didn't match what customers were looking for, Farrell had a paradigm shift. It's not that he stopped seeing a place for finer dining, he just started seeing there were other places at the table, too. "We started going to local stuff, calling up the local butcher and having different purveyors for everything: it was a real market mentality," he says. "I'd never really seen that before.

"I remember when Heston Blumenthal came out with In Search of Perfection," he says. "That was one of the first cookbooks where I was like 'A-ha! I like this.' It finally clicked in terms of finding a style, to know the best way to make something and to follow through and do it; just getting into the heart of why something cooks the way it does and not just throwing it together."

When Farrell returned to Halifax in 2008, he started working at The Coastal Cafe and then picked up a second job at jane's on the common. "I was basically portioning fish and on the line doing prep work in the background. I still got two days off and was able to see more than one kitchen," he says. "And when I was working at Coastal I dropped off a resume at Fid.

"Any well-rounded cook has to spend time in more than one kitchen, and bounce around," says Farrell, who then spent about a year and a half in Dennis Johnston's kitchen. "You learn things every place you go. I definitely think there are some not so great places to work, whether it be hours wise or work conditions or whatever, and I think sometimes you have to hunt around and sort of see the silver lining of where you are.

"Mark [Giffin, at Coastal] was so good at turning out quick, tasty food that wasn't your normal breakfast fare. It was great, seeing things slightly out of the box like that---still creative, but not having little cubes of gelatin or fucking spheres of whatever. And seeing how Paolo [Colbertaldo] at jane's made that machine work was really fascinating. Then, going to Fid, Dennis was amazing with the market. I got to do the market run for him and got to see where to get the best cheese, where to get the best vegetables, who grows what when and just knowing that has really helped."

And then he stopped doing the market run for Fid. Because Johnston fired him.

"I didn't see it coming, but it was the best thing that ever happened to me," Farrell says with a shrug. "It's about the plate, not the person. We didn't see eye to eye on a lot of things and had different ideas and different personalities."

The next day he walked into Chives and within the week had a new job. And while nothing is ever perfect, the fit there was pretty damn close.

"It's funny, you always get the stress of the kitchen, but Craig and I have a good working relationship. He's not on the line, obviously, but he knows how the line works and he's a master organizer, so it's been good in that he knows what to give to me and I know what to push up to him. It's a good delegating kind of situation. It works out really well."

So well that Flinn handed him the keys to the kitchen at 2 Doors Down.

"I'm sort of at this weird stage where my unintentional five year plan has worked out. Like I moved to Halifax, got jobs in kitchens, got fired," he says, laughing. "Bounced back and figured my shit out. I'm happy right now and I know how lucky I am to be in a position like this to actually be having such great input on a menu and such a great team. I've been saying it's sort of a dream, but you know maybe that's because I'm walking around with too little sleep."

"It really came down to trust," says Flinn. "I really trust Andrew's cooking.

"And another thing about Andrew," he says. "He knows when to go to bed. There's a sense of professionalism. But he's always drinking coffee, and that's not healthy. Coffee and cigarettes: it's a curse of the industry."