The reality of being a trans drag performer in Halifax. 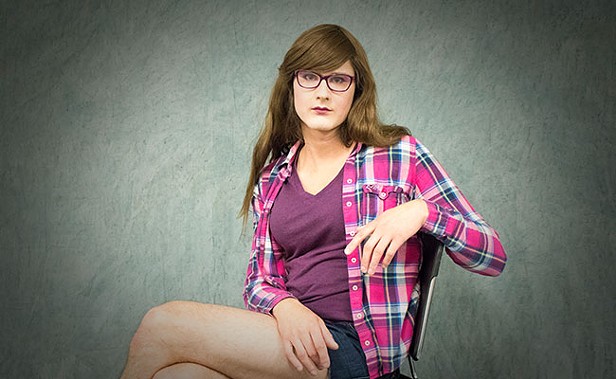 Joi Carvery-Taylor
Anna Thematic at a drag show in fall 2017.
If you think of queer culture, one of the first things to come to mind—for better or worse—is .

“For me, drag has often been a safer space in which to explore my own gender identity and expression,” Thematic says. “My drag persona is very much a representation of the femininity I was afraid to access throughout most of my life, and a lot of my performances deal with the difficulties of questioning and coming out.”

SUBMITTED
Jessica Durling is a journalist, human rights activist and radical sex theorist.
Genderqueer falls outside of the male or female binary. Thematic, who uses both “they/them” and “she/her” pronouns, got into drag early in her own genderqueer discovery during the 2015 GenderFuck Pride event in Halifax.

Thematic emailed the event’s organizers asking if they were interested in having a new performer. At the time, she says, all she had planned was her first name and the idea she’d be incredibly awkward and non-sexualized. The organizers welcomed her onboard and she’s been hooked ever since.

GenderFuck Pride’s acceptance doesn’t mean drag is not without its fair share of transmisogyny, however. Global figures like RuPaul have used slurs against trans women and compared the difference to having one’s sex be misidentified at birth and being a drag queen as “about $25,000 and a good surgeon.”

Thematic says a lot of the thinking behind those comments can be chalked up to the perception that drag is an art form solely for cis or gay people.

“A lot of drag queens seem to present this caricature of femininity which is often quite sexualized and frivolous,” she says. “And, of course, the insistence that queens are ‘just’ men in costume not only pushes out trans performers but feeds back into the public perception that we are just ‘men trying to be women.’”

It’s impossible to do drag in this day-and-age without being influenced by icons such as RuPaul, and the Halifax drag community is no exception. Thematic doesn’t consider herself an expert on the local community—just a member—but she still thinks there’s a lot of latent transmisogyny that goes unchecked in the “new wave” of Halifax drag.

“I don’t want to go too much into it, but it definitely emerges in stuff like the prevalence of trans masc drag kings—who are often unabashedly femme—and the relative scarcity of trans femme performers of any kind,” she says. “Also, a lot of conversations about or involving usually descend embarrassingly into transmisogynistic, cis-sexist realms without even realizing it.”

That sort of thinking ignores how the origins of drag are tied to trans women, with early historical figures like Marsha P. Johnson and Sylvia Rivera—who were both behind the Stonewall riot that birthed the LGBTQ+ movement we know today.

“Drag is actually at its most powerful and subversive when it’s trans women and transfeminine people performing their own repressed femininity on stage,” says Thematic, “or using drag to mock the masculinity that was imposed on us, which we’ve done for decades, if not centuries.”

Get a Sweet Tease of burlesque and drag this weekend