“They make me feel like I'm not seen as a Canadian,” says president of Dalhousie's Muslim Students' Association. 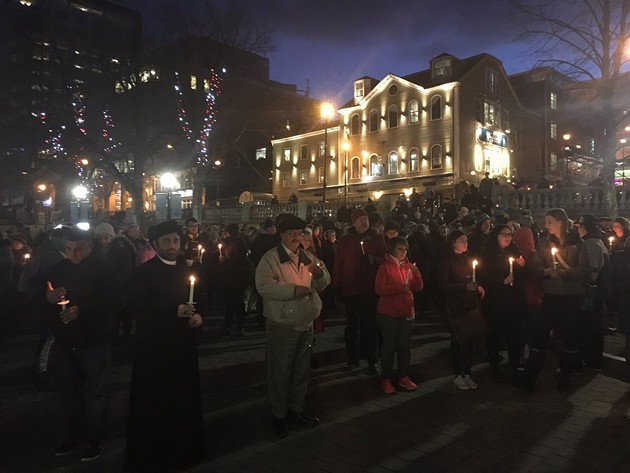 PHOTO BY REMO ZACCAGNA
A vigil in Grand Parade for victims of the Quebec Mosque shooting held back in January.
“Confiscate and revoke the passports and citizenship of those involved in terrorist activities including their immediate family. Muslims protect Muslims.”

That’s the anonymous comment made by one self-identified Atlantic Canadian as part of the federal government’s online public consultation on national security. The feedback was collected last fall to gain insight into what reforms Canadians would like made to the government's Anti-Terrorism Act, commonly known as Bill-C51.

Recently released data from those consultations show that while Atlantic Canadians weren’t in favour of Stephen Harper’s public safety legislation, some are still concerned about the threat of “” Muslims in Canada.

“Seeing as the only groups out there who are being are Muslims I think you need to start there,” wrote one Atlantic Canadian to the federal government.

“I think that those are absolute crap,” she says in response to some of the statements made in the consultations. “Oh my god someone actually said that?”

Shocking, but not surprising. Khan says a day doesn’t go by without her experiencing some kind of Islamophobic incident.  “I’ve had someone refuse my service. I’ve had someone threaten me because I was wearing a hijab. I’ve had someone tell me to go home,” she says. “They make me feel like I’m not seen as a Canadian.”

Only 516 of the 2,107 people who used the online consultation chose to identify themselves as being Canadian, and even fewer (31) identified as living in Atlantic Canada.

The local data is admittedly limited in scope, but arrives amidst growing Islamophobia in this country that’s already killed six and wounded 19 at the Quebec City mosque attack in January, and produced ongoing backlash from some conservatives against the government’s M-103—a private member’s motion, with no legal force or effect, that condemns Islamophobia and systemic racism.

That hate, the consultation shows, is here in Atlantic Canada as well.

“Bulk up our military efforts at home,” one person wrote. “Not to the extent of a police state but find a happy medium where terrorist know that if any [sic] acts are carried out there will be a hunt and destroy mentality.”

Khan says of statements scare her, and with Bill C-51 still in effect she knows anti-Muslim sentiments won’t go away anytime soon.

“I think it is incredibly sad to see political parties not stand up for justice,” she says. “It’s just sad and disgusting to see.”

A report on the public consultation reviewing Canada’s security and Bill C-51 is expected to be released this spring.