The young Halifax poet offers “the most vulnerable thing I’ve ever done” in the form of her debut collection Disintegrate / Dissociate. 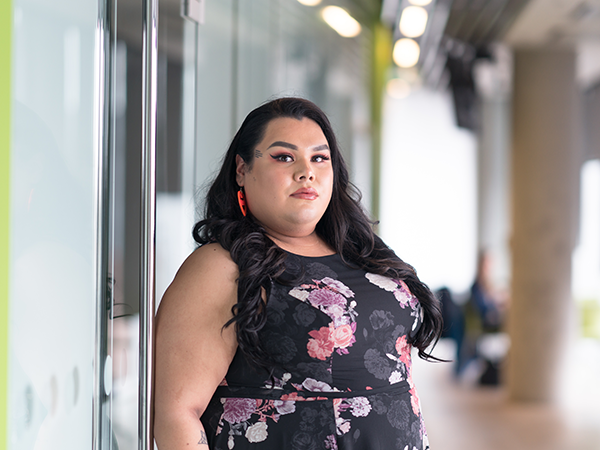 Originally from George Gordon First Nation, Arielle Twist, 24, has been well-known among Halifax queer communities for the past several years through her work as a sex educator at Venus Envy. But these days, you're more likely to hear of her as an artist, performer and poet—titles she says she doubted she would ever hold.

That doubt lifted in March 2017, when writer Kai Cheng Thom was in town to launch her book Fierce Femmes and Notorious Liars at Venus Envy. After meeting at the launch, Twist and Thom immediately hit it off—"She was like 'You're trouble' and I was like 'Mhm,'" says Twist with a laugh. Their connection sparked both a friendship and a mentorship: Thom encouraged Twist to start writing poetry, planting a seed that would soon grow into a new creative world.

Soon enough, Twist's poems were catching the attention of other poets and publishers across the country. Her next two years as a writer read like a whirlwind: She did her first reading (with Thom and Gwen Benaway at Venus Envy), travelled to her first festival appearance (at Naked Heart in Toronto) and began work on a manuscript during her first residency (at the prestigious Banff Centre under the guidance of rising CanLit star Billy-Ray Belcourt).

This Saturday, Twist launches her debut collection Disintegrate / Dissociate at the Khyber Centre for the Arts with a reading and a dance party. Much like her plans for the launch, the poems that make up her book hold space for both grief and joy.

And yet, she says, she finds that hope and hopelessness can co-exist in her work, just as they often can in her life.  "It echoes throughout all of my poems. There's a fear and a grief and a sense of loss in even the happy poems, but even in the sad poems there's always a sense of hope. They're not mutually exclusive, they all can live in the same breath."

Sex figures heavily in Twist's work, but rarely in ways that you might expect. In her poems, sex becomes a way of navigating power and vulnerability, something that both incites fear and holds the power of pleasure and transformation.

"I feel like I couldn't separate my work as a sex educator and my art," she says. "I think sex is one of the few pleasures that we as traumatized people have in the world. And it's also messy and fucked up and hard to navigate—but once you navigate it...choosing to be vulnerable as a vulnerable person is so powerful."

She circles back to this idea often: choosing to be vulnerable as a vulnerable person. As a Nehiyaw, 2-Spirit woman, one of only a handful of trans Indigenous women currently publishing in Canada, Twist says that her life is inextricable from vulnerability. Choosing vulnerability is more than just a poetic subject: It represents not only her lived experience, but also the leap she took when she started writing two years ago.