Armaan Dhillon is dancing for diversity 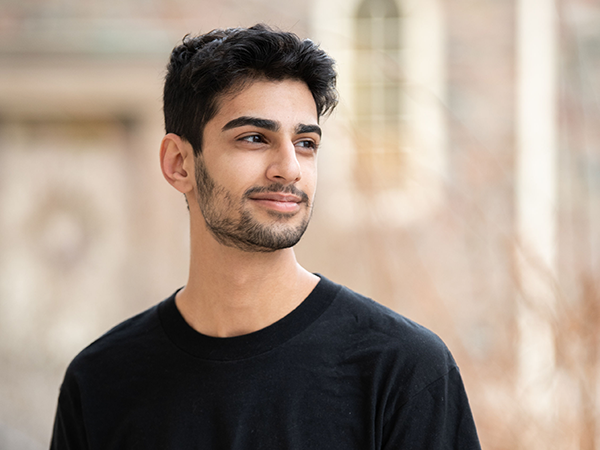 Last year during a cultural festival at Dalhousie University, six university students took the stage in bright colourful outfits called Vardiyaan for their first performance. The routine brought together various folk dances from across the Punjab region of India and Pakistan. Now, with Armaan Dhillon at the helm, they form the six-person Bhangra group Noor Bhangra and are knocking down cultural stereotypes with each kick of the Double Chaffa.

Nineteen-year-old Dhillon was born and raised in Dartmouth with a family name well-known in the tight-knit Sikh and South Asian communities of Nova Scotia. Like most children of immigrant families that he knows in the Maritimes, he is a high-achieving scholar. He works part-time to help pay a portion of his Dalhousie University tuition and spends a lot of his free time with his friends engaged in some form of art or music.

He became a Bhangra choreographer by accident: In 2017 he performed a Bhangra dance with his Sri Lankan friend at a conference at MSVU. To his surprise, says Dhillon, the video went “Hali-viral” and prompted him to gather a few more friends in Halifax to form a larger Bhangra dance troupe. The new group received an eyebrow-raised welcome for its members. It’s made up of friends that range in ethnicity, nationality and levels of dance training.

“At first, there was a bit of debate and some questions in our community surrounding the inclusion of what some would call an ‘outsider,’” says Dhillon about a member. “There’s not always a sense of real solidarity between people in South Asian communities and even though her origins are Sri Lankin, to Punjabis, some would still consider her a foreigner.”

Dhillon says that overall, the general reaction to his first performance and the formation of the larger group afterwards is primarily one of joy. He believes the initial shock he first experienced is a natural reaction that occurs when cultural norms are disrupted.

“There’s this conception with that somehow because it is linked to your culture and your ethnicity in your community, that some weird evolutionary thing gives you an innate ability to perform that dance,” he says. “But these are just constructs. Dance can be taught to anyone.”

Modern Punjabi culture is largely shaped by the partitioning of India and Pakistan in 1947. Bhangra has evolved from a colloquial celebratory dance—customized for social class and region, and typically performed by men in individual villages—into an exuberant cross-cultural genre.

Dhillon continues to learn about Bhangra as group leader. Of the 366 Punjabi folk dances and seven classical dances, it’s the most adaptable. “Bhangra is both from and of the people, it shows our traditional heritage and yet there is also a very modern, new thing about it that changes with time,” he says. “And that is not just in Canada, that’s in India and all over the world. There is no authority on Bhangra. We don’t really see it as a protected high art like some of our more classical dances, it’s more open to interpretation.”

Dhillon says Colin Talwar and Hasmeet Singh , founders of the popular Maritime Bhangra, paved the way for groups like his. “I’m not the first one to do this and I’m not the best dancer. But even still, change and diversity not as common as I thought it was,” says Dhillon.

“There were still people who are still really shocked to see a Sri Lankan, a Black guy and a white girl from Turkey performing Bhangra, but for us it was normal.”

Dhillon admits there is a huge grey area between cultural appreciation and appropriation, which he says is actually just ignorance.

To the ignorant, he offers the following advice: “I think we all have to ask ourselves a few questions before we speak or act: Am I harming anyone? Am I skewing things unfairly? Am I pretending to be something I am not? Am I stealing from something sacred? Am I giving credit where credit is due? And lastly, and I honestly think our society would improve so much if we all just took the time to ask ourselves this one question, is this dumb? Let’s just not be dumb.”