If your meal’s not great at The Lord Nelson’s little taste of Britain, a single piece of pie can win you over. 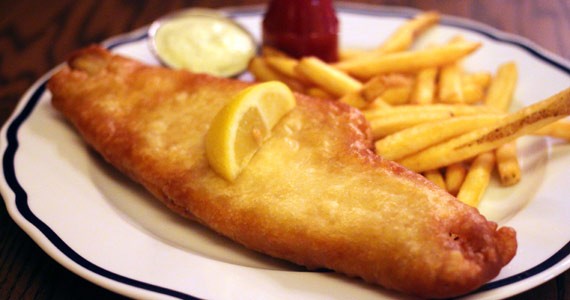 It's early Saturday evening. A hedge of limousines wraps around the Public Gardens and a dull chatter hangs in the air like a low cloud. It's not until I see the creased tuxedos and wrinkled taffeta that I realize: it's a prom night. Droves of girls wander around in gossamer fabrics, sunlight firing from sequin to gemstone like the pings of a pinball machine.

It's an escape in The Lord Nelson, a dim embrace in The Arms, the reimagined Victory Arms which debuted in February. The only sign of the outside chaos is one girl in a fluff of dark-green taffeta who flounces through the patio doors, never to be seen again.

The restaurant smells like grease and vinegar. Fish and chips seems to be a popular choice amongst the scattering of patrons in the huge dining room. The smell adds to the British vibe The Arms is going for. The stairs to the upper section of the dining room are flanked by a set of curtains, each one a weathered half of the Union Jack, blending well with the roughcast walls.

Tin ceiling tiles give a dusky sheen that adds to the warm, weathered look of the room. Dark tables with a faux wood finish are either tucked into leathery booths the colour of oxblood or surrounded by grey open-arm tub chairs that give an old, lounge-y feel to the room. The carpet and chairs are a clash of patterns, and chandeliers and light fixtures that hint at the dawn of electricity hang from the high ceilings: more nods to the type of 18th century design that Lord Nelson might have sat around in.

My friend and I look through the menu as what seems like a satellite radio station specializing in tedious hits blandly spits out the highest charting singles from artists like The Allman Brothers and Van Morrison. She chooses the ever-popular fish and chips ($15). The server steers me towards the short rib ($18). I also order a Pimm's Original ($8), a lemonade-based drink, from a very decent cocktail menu.

We start with devilled eggs ($6). There are six egg halves, three that are standard li'l devils, and three that are purportedly spicier. The latter taste unseasoned. The plain ones taste like even less. They are exceptional in their blandness. The best part is the garnish salad of pickled vegetables in the middle of the plate with its crisp acidity and surprising hit of nutty sesame oil.

There's a nice idea buried somewhere in the Black Angus beef, but the short rib is not great. Served only with duck-fat potato wedges, it's too much heaviness with no reprieve. And while the sauce, a blueberry whisky reduction, has a nice hit of sweetness, the plate completely lacks acidity. The small amount of sauce also can't hide the toughness of the meat. It's dry and sinewy, not hitting the perfect point in cooking where the connective tissues turn tender. Each mouthful is a chore. I give up after three or four, and just eat the tasty potatoes.

The fish and chips are great. The haddock fillet hangs off of the sides of the plate, beer-battered, huge and golden-brown. The fish is light and mild, flaky and wonderful. The housemade tartar sauce has just enough tartness to cut through the grease. The fries are decent, if unmemorable. Sadly, though, there's no coleslaw. Much like the short rib, the plate doesn't feel very balanced.

The highlight of the meal, by far, is the housemade banoffee pie ($9). The bulk of the pie is a stiff, sweet pudding-like toffee made of boiled condensed milk, topped with sliced bananas and a thick cloud of whipped cream. All sins are forgotten with this pie. With one dish I suddenly can't wait to come back to The Arms.