Eyelevel Gallery Public Performance Series brings the gallery to the people this weekend. Stephanie Johns forages for the arts. 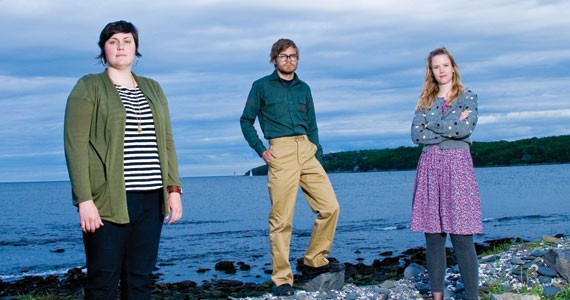 Point Pleasant Park has long been known as a great place to picnic, to go on dates, to break up with someone and to clear your head. This weekend, thanks to the Eyelevel Gallery's Public Performance Series, it's also a place to see performance art.

The park is no stranger to artistic ventures, from Shakespeare by the Sea, which has its home base in the park, to artist Aimée Brown's recent stay at the Gatekeeper's Lodge, where she turned the park's history into thought-provoking art.

Brown became a mentor for Sarah Burwash, project coordinator of the series, imparting on Burwash and the artists her knowledge of the park's history. Brown and Eyelevel are doing a swap of sorts---Brown, who worked in the park during her residency for five months, will show her SURVIVAL/SALVATION exhibit at the gallery, while Eyelevel is sending artists into the wild.

Inspired by former Eyelevel director Eryn Foster's 2007 series Wilderness Acts, in which artists Lori Blondeau, Rita McKeough and Janet Morton brought their performances into Kejimkujik National Park, Burwash applied to the HRM Cultural Affairs Open Project program with the idea for the public performance series. "I thought it would be a great opportunity to activate the park in a way it normally isn't, and good for the artists to use this really diverse, interesting location," says Burwash. "It's a place that's full of people no matter what, so it's a great opportunity for interaction."

In the series, four Halifax artists---Allison Comrie, Barbara Lounder, Andrew Maize and Will Vandermeulen---head to the park in an effort to, as Burwash says, provide "an intersection for the park and gallery to meet, providing a mutually beneficial exchange of ideas and experiences for both communities." Hoping to both win over a new audience and bring the gallery's traditional audience into a new venue, Burwash organized a packed weekend. The series takes place this Saturday and Sunday, June 25 and 26, from 11am to 9pm, with artist talks at 7pm. The 4Cs Foundation Art Bikers will be there, and there's a picnic in the park on Sunday. The gallery opening is Friday at 7pm at the Eyelevel; Aimée Brown's exhibition runs until July 1.

The performing artists have developed new and refreshing ways to see the park as an art space. Vandermeulen's Meteor may disarm the casual dog-walker, but is guaranteed to provoke some reactions. "I'll be dressed in a uniform. I'm going to be searching for something in the park, although it's not clear what I'm searching for," he says. "I'm going to set up systems that will assist in the search, and ask people to help me." And Vandermeulen is looking forward to the idea of involving random strangers. In a gallery setting, he says, the viewer is separated from the artist---something he would like to avoid. "The moment you can account for an activity as art, it loses some of its ability to transform a situation, or someone's perception of it. It loses its power. I really like this series because there will be a lot of people at the park who won't know that what we are doing is part of a performance series."

Lounder's Stumps: an illuminated performance/walk was inspired by her work with the children from the Point Pleasant Child Care Centre earlier this spring. When Lounder found out about the series, she tried to involve the young patrons of the centre and its coordinator, Susan Willis, was very receptive to having the children work with artists. Lounder's previous art practice has involved walking-events throughout the city and this weekend there will be a procession through the park, with Lounder in costume, as well as "some short songs, spoken word elements, actions and projected digital images along the way." Lounder also hopes for audience participation, in particular from the children and families who use the child care centre, as they have already cultivated an appreciation for the park's artistic beauty. "The children from the daycare spend time in the park almost every day, and I came with them and did art projects with their classes during the last weeks. We explored forms we found in nature, such as spirals--- in fiddleheads or bracken fronds---and looked at flora and fauna such as potato bugs and old-man's-beard lichen and moss."

Maize made links between the park, military history and youth, and came up with Kites. He flew box kites with his grandfather when he was young and learned about a different type of sport more recently. "I was in Michael Fernandes' performance class [at NSCAD], and he taught me how to build a fighter kite---a sport Michael played when growing up in Trinidad."

Maize explains that Gudiparan bazi, or kite fighting, is a major sport in Afghanistan and was outlawed when the Taliban took control of the country in 1995. Of his project: "It all fell into place shortly after, the military and recreational history of both the kite and Point Pleasant Park."

His focus on the park's militaristic past has personal significance. "I've been leading kite building workshops with a goal of building 160 kites, one for every Canadian killed in Afghanistan since 2002. A childhood friend was killed last year, Private Kevin McKay, two days before his tour was finished. So the project, like most of my work, has sprouted from personal roots."

Maize previously drew upon the park's military history for a different project involving the Halifax Memorial (a monument listing the names of 3,257 Canadian men and women killed in WWI and WWII). Maize tried to carry 3,257 stones from the shore to the memorial, using a shirt that reminded him of his friend.

"I carried a thousand---10 at a time---and called it a day. When I came back the following day, my pile was gone, and all that remained was a scar on the earth from where the front-end-loader had plowed the stones back onto the shore."

Despite that frustrating finish, the artist's pleased to be back in the park. "It's good for artists to make their work in the public space, to engage with a wider audience. It's not as safe of a forum as the white walls of an art gallery, and I think artists need to be more involved in the public sphere."

Comrie's Erased de Comrie is an ode to American artist Robert Rauschenberg's Erased de Kooning and a way for her to bring her normally private practice into the world. In the past, Comrie has worked with a gum eraser to create drawings or animations. This weekend she will play with the "camper's code"---the idea of always leaving a site better than you found it. "For my performance I will be erasing my footsteps continuously as I walk through the public pathways of the park," she says. "In an attempt to 'clean up' through this restorative action, a new path is created."

Comrie would like to involve park patrons on a social level, seeing the park as an extension of the gallery. "I immediately think of Paris and the tables at cafes that are in rows facing outward. People can sit, have a drink and consume the public as they go by. I think it's the same in parks too, where people observe people, animals and seasons. One of the exciting parts of the performance series is that people will be engaging with each other who normally wouldn't be communicating. My goal for this weekend is to create a space where the public can interact and talk to each other instead of watching each other pass by."

Whether highlighting the park's military history, natural beauty or social aspects, the weekend performances remind us of parks' significance in a city, as something we shouldn't take for granted. Lounder's research brought her to the Point Pleasant Park comprehensive plan and design proposal by Ekistics Design, drafted after the park underwent serious damage after Hurricane Juan.

"It's an inspiring document in many ways, partly in that it conveys how important the park is and has been as a place for reflection, adventure and learning," she says. "It fulfills these functions in both private, personal ways, and for the community as a whole. I think of parks that way---as a source of nourishment for body, mind and spirit."