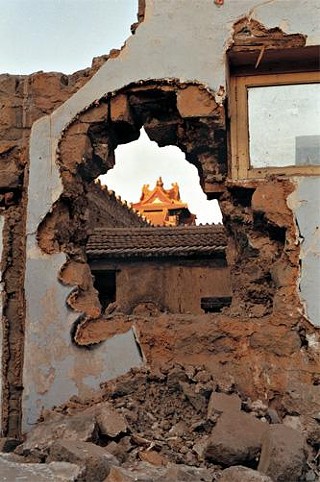 I know very little about Chinese contemporary art, but I figured now's as good a time as any to correct that oversight. Zhang Dali is a big name; he was the only graffiti artist in Beijing during the '90s, and was the first artist since Keith Haring and Jackson Pollock to be on the cover of Time. Zhang learned graffiti in Paris, and his most phenomal work is "Dialogue," an ongoing piece of over 2,000 bald heads (his own) spray-painted across Beijing, mostly on buildings scheduled for demolition, from which he would later chisel out portions.

Halifax artist Cathy Busby has exhibited in China before, and I believe is heading back soon. For her installation, Whatever I Like (Pickled Art Centre, Beijing, 2007), she "compiled photos of people wearing English-language message t-shirts in Beijing. I transposed a sampling of messages to fill a gallery wall, designing the stenciled wall texts to resemble propaganda message-painting, echoing the once ubiquitous propaganda wall paintings of the Chinese Cultural Revolution of the 1960s and '70s."