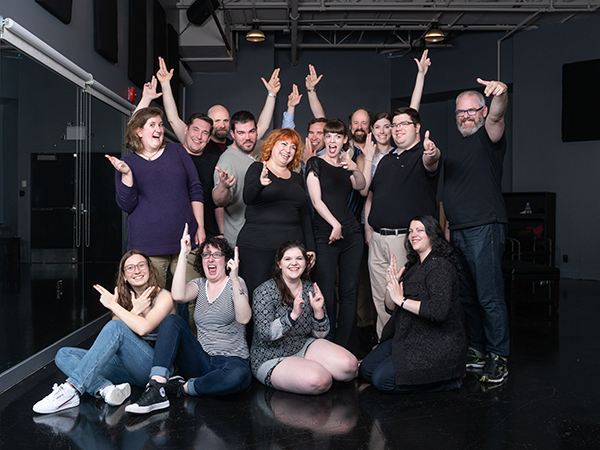 A ssassins gets straight to the point in the title: It's about the nine men and women who have attempted to or did murder an American president. It's also a musical, giving each assassin an opportunity to explain themselves through song.

"There are always people who think that certain subjects are not right for musicals," as its composer, Stephen Sondheim, told The New York Times in 1991 during Assassins' inaugural Off-Broadway run. (The 2004 Broadway revival won five Tony Awards.) "I remember that there was a letter of protest when Rodgers and Hammerstein's South Pacific opened that said, 'How dare they write a musical about miscegenation?'"

A Halifax production by Whale Song Theatre, opening Tuesday, is excited to tunefully push some buttons too.

"It's a very interesting twist on what is very dark material," says director Ian Gilmore, who also choreographed the show. "It's not a traditional musical theatre piece, there is no plot. It's very free of time and place. It's more like a cabaret evening."

This framework allows assassins of different eras to interact and hang out, duet together. It offers a look at the varying mental states of the more famous criminals—John Wilkes Booth, Lee Harvey Oswald, John Hinckley, Jr.—as well as the ones you might not be as familiar with or have forgotten about. They include Samuel Byck, who tried to crash a helicopter into Nixon's White House, and Giuseppe Zangara, who tried to shoot Roosevelt.

"People trace their own personal problems up the line—this is the person at the head of the line; if I eliminate them everything will fix itself," says Gilmore of the assassins' reasoning. "Deluded, yes, but there is a sense of logic to them. When you can't get customer service, what do you do? You ask to speak to the manager."

"It is an intimate space," Gilmore counters with a laugh. "We have a cast of 14 and a set—that alone brings everyone closer to the audience. A show like this does make you uncomfortable, and I think the proximity itself makes it even a little more uncomfortable."

(Gilmore also warns there are 80 gunshots in the show, if frequent, sudden noise is a trigger for potential audience members.)

Assassins does not present a case in favour of the assassins—if anything it's a commentary on the lack of mental health resources throughout history. (Whale Song is donating some proceeds to the Mental Health Foundation of Nova Scotia.)

"This was a cry for help," says Gilmore of each incident. "This is what happens to mental health when it goes unchecked. They didn't have the support system they needed."

Nonetheless, it doesn't excuse or condone their behaviour, and no one watching should either.

"This isn't a show about empathy or sympathy, you don't want to leave feeling bad for these people," he says. "You just want a greater understanding."