This year's line-up will rock you like a, um, hurricane. 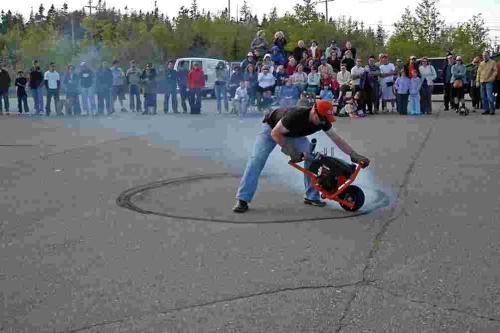 This year AFF is spreading out the anticipation; it's like an advent calendar for film nerds. Yesterday they announced the Atlantic program line-up, with over 70 short and feature-length films.

Newfoundland film is really strong this year—the Atlantic gala presentation is Love and Savagery by director John N. Smith, a religion and love story set in the late 1960s. I am so stoked for two films, coming from close friends and often co-conspirators. Adriana Maggs releases her directorial debut, Grown Up Movie Star, about a young girl left with her father after her mom runs away to become a movie star, and Sherry White's Crackie, in which a young woman wants to escape her Newfoundland life and her grandmother (Mary Walsh). Maggs and White were responsible for the short-lived but brilliant CBC comedy pilot Rabbittown, in which they wrote and starred as Odelette and Louanne—it was Ab Fab meets the Rock. And probably the only comedy that has ever featured Celtic erotic dancing.

I'm also really curious about Love and Cameras in America, the first film by Nathan Fielder (dude cracks me up as a writer/actor on 22 Minutes). Also look for the doc Tulko, by Gesar Mukpo, and Jiggers, from PEI director Adam Perry.

In the shorts category, Jacob Owens (filmmaker who brought us the amazing Copain trilogy, about a gay hamster's quest for love) has a new film called Conscript, that, like Copain, looks graphically beautiful and detailed. See the trailer here.

Another film that will be fantastic is Burning Rubber, Ariella Pahlke's documentary about culture of burning rubber as a form of self-expression. She interviews drivers and artists about the phenomenon you most often see snaking across rural roads —there was an performance at Exhibition Park in 2007, with arts and car lovers, watching drivers make skid marks all over the parking lot. Sounds bizarre but it was incredible.

Don't know too much about the film yet, but I'm also excited to see short films by locals like Luckas Cardona, Andrew Bush, Andrea Dorfman, Jeff Wheaton, Aram Kouyoumdjian, Tarek Abouamin, Krista Davis, Thom Fitzgerald and Jay Dahl (no scaring the shit out of again, thanks), Melanie Colosimo.

For the full list of Atlantic films, go to www.atlanticfilm.com/aff/. All of the galas and special presentations will be announced next week on August 25.