Our team of theatre reviewers reports in from the Atlantic Fringe Festival's opening night.

The reviews are in from the opening night of the Fringe Fesitval. You can just read them all in order, or jump to a specific one with these links:

Hummingbird
I'm Only One Man
The Mom Show or the Most Boring Show Ever
Noel James, What's Welsh for Funny?
The Princess Show
Stood Up

Much enjoyed. The blurb in the Fringe Guide and stage manager's preamble before the play are a bit too didactic and self-serious but Hummingbird itself (and the work by its two actors) has a very nice sweetness alongside its depiction of anxiety disorder. Louise has the disorder but both she and her partner Gus feel the pain of it in hard times and the relief and lightness when times are better. Great use of the small limited stage showing Louise and Gus's apartment and garden. Adept sound design by Liam Cole. The funny yoga sequence resonated with the whole audience.

Anxiety disorder affects many people (including this writer) and those around them; both are shown very nicely here. Hummingbird is for everyone: beyond the trials and triumphs of the disorder, there are terrific vignettes here of a relationship's give and take.

There are only two more shows in a small venue. Don't lollygag about getting tickets. —JK 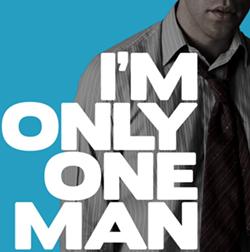 I'm Only One Man
written and performed by Jon Blair

Jon Blair's I'm Only One Man plays like a Saturday Night Live audition tape as he cycles quickly through at least 12 different quick comedic scenes (I lost count). Blair is comfortable on stage and knows how to get a laugh with characters and scenes that are smartly constructed for an audience that is used to television jump cuts. The shocking juxtapositions taking the familiar and turning it on its head is the mine from where Blair extracts his humour.

If you were one of the many who turned out for the local comedy group Picnicface in their heyday you will love this show; the fast-paced joke density is perfect for those looking for crowd-pleasing sketch comedy by a seasoned comedy professional. —Ian Mullan

The Mom Show is a delightful surprise that delivers a postpartum dissection of motherhood from the stretched belly to a personal identity crisis. Viewed as either a glowing pregnant woman creating life or an obstacle to the party planning process, the modern mother is expected to be everything but an inconvenience.

Amy Grace is a sharp performer who manages to make her show relatable and funny to an audience with or without children. In a generation where "adulting" has become a verb to describe performing the day to day minutia of life, being a mom seems to be doing it on a whole other level.

The Mom Show is a honed piece of theatre so timed-out that when the moments of vulnerability are found and allowed to breath they stand out and tug at the heart reminding us, or maybe just me, of my own theatre-loving mother. I do question the subtitle "the most boring show ever" which does a disservice to an entertaining show. Later when I questioned the choice a friend pointed out, "perhaps it's just typical mom reverse psychology?" —Ian Mullan

Fresh from a show at the Comedy Lounge at Lubljiana, Slovenia (by way of a holiday in Newfoundland where he was apparently screeched in and had no idea what the fuck was going on), James has washed ashore for his third fringe in Halifax. His casual (read: shambling) style and silly-putty face Fast-paced and brash show, yet James has this self-deprecating look on his face much of the time. A master class in the art of the pun taught by a bit of a daft. The word play is constant and funny. James runs through girlfriends, Wales, the amazing number of eccentric jobs he's had with a bit of physics thrown in, which James has a degree in. Really excellent bit about Stephen Hawking. James is indeed from Wales, from the city of Swansea, also home to Dylan Thomas (fans of Under Milk Wood are in for a treat). —JK

Angels and Heroes and Theatre Outré’s multimedia musical The Princess Show is a beautifully theatrical parable about the power of the self to empower, create and also to destroy.

Using conventions from the world of anime and the world of camp, creators Aaron Collier, Richie Wilcox and Deonie Hudson give us a strange new world for characters Princess Edward (Collier) and her boyfriend Abel (Wilcox) in a piece that is part theatre, part television, part Performance Art. As in children’s cartoons The Princess Show hinges on its protagonist’s need to go on a quest, to defeat a beast and to learn a lesson. The dialogue primarily services the plot, telling the audience information they need to know rather than worrying too much about being “realistic”; the movement is stylized with incredibly strong specificity, and Collier and Wilcox lip synch all their lines over their own pre-recorded voices. All of this creates a bit of Alienation Effect, but the cartoon imagery they are playing with (that many of us associate with our childhoods) also creates a striking sense of familiarity. We already know how to connect to Princess Edward and Abel because this type of parable is one we have grown up with. It’s not even surprising at the end when the moral is clearly defined for us.

It’s interesting that the most ardent way the audience connects with Princess Edward and Abel is through their movement, especially in dance and during Princess Edward’s lip synched performances. It is also interesting that, unlike in anime, Collier and Wilcox’s lip synching is perfectly timed to their recorded lines. Collier has some powerhouse performance moments where the lip synching reaches truly phenomenal heights. Indeed, there are many layers of performativity at play with these characters, in performing gender, performing as an artist, performing in society, and performing our various incarnations of self. This innate playfulness allows Collier and Wilcox to make large leaps of creative faith and to trust that the audience will leap with them.

The projected set, which includes some characters in Claymation, along with Collier’s original music, does a great job of creating Princess Edward’s futuristic world. Visually, Collier is aptly regal in an array of fanciful outfits, while Wilcox captures the parable theme vividly, looking like a sort of Hipster Geppetto from Pinocchio.

In all, The Princess Show is a very strongly performed, intelligent and theatrical parable for adults told using a creative mixture of media conventions. Everything pulls together into an interesting and cohesive whole. —Amanda Campbell

Stood Up
By Adam Myatt

Adam Myatt has been stood up in Stood Up, his new fringe show. The real bar of the Company House stands in as the bar of his date gone wrong, and the bar of his stand-up show where his set list going much better. Settling into the familiar trope of Seinfeld and Louie and many other stand-ups-turned-sitcom-stars we're tossed between the date and the show, each seeming to comment on one another, weaving us through observations on wine, relationships and life, all in a likeable and comfortable way.

Myatt is easily one of the most charming new comics I've seen, avoiding pitfalls of others who can sometimes seem too mean or too self-deprecating in their quest to get a laugh. Here the laughs come easily and frequently, hampered only by the slow scene transitions slowing the momentum of a show which has heart, because Myatt has heart.
—Ian Mullan