September 03, 2016
Read them all, or jump to a specific review with these links:

Callaghan! And the Wings of the Butterfly
Heavy
I Guess Last Night
I'M CHE GUEVARA, GOD-DAMN IT
My First Last Waltz Or The Queer Ages
Re-taled
Speaking in Tongues—African Nova Scotian Storytellers 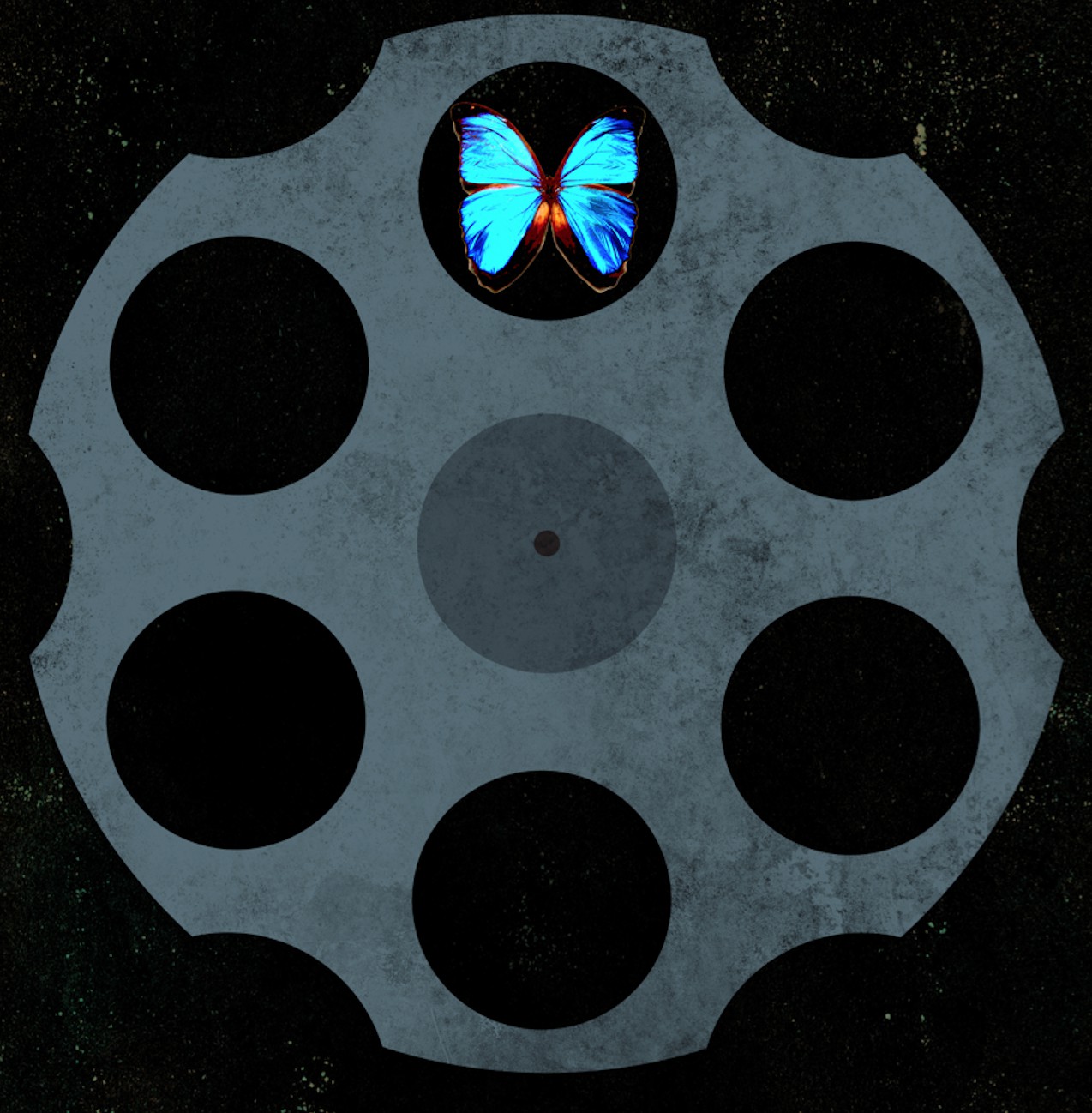 Callaghan! And the Wings of the Butterfly
by Sex T-Rex

Wings of the Butterfly introduces us to Jack Callaghan, an often brooding hero on an archaeological quest in Guatemala to find the ancient Mayan relic, the wings of the butterfly, which holds the secret to time itself. With the help of his friends Sal and Walt, Callaghan navigates a plethora of dangers before confronting the villainous Dr. Klaus Von Handerstopp, who has disastrous plans for the butterfly wings. Callaghan must also come to terms with the fate of his wife, the savvy and intelligent Muriel, in order to save the world from Handerstopp.

The story is tightly and imaginatively woven, the characters are well defined and and strongly portrayed by the cast, especially those who play multiple secondary characters as well, but I think the trademark of Sex T-Rex is how joyfully and genuinely fun their shows are to watch. From their beautifully choreographed fight sequences (Kevin MacPherson), to their self-referential asides and clever pop culture references, to the fun dance sequence (Robin Henderson) Callaghan: Wings of The Butterfly, like Swords: A Play of Swords keeps the audience in nonstop laughter. It is silly. It is playful. It is exactly what theatre, in its purest form, was meant to be.

Go see this gem of a show. You’ll wish you could go back in time and experience it all again. —Amanda Campbell

In Heavy Taylor Olsen wants you to like him; this is made very clear by his theatre program which contains some favourite quotes, a shirtless selfie, his entire CV (or what seems like it), a back page which asks for your critiques and the line "hope you don't hate it" in his introduction.

All of this seems in opposition to the confident attractive presence Olsen holds on stage as soon as he walks on before proceeding to weigh himself down with 100 pounds of very real physical weights, sinking himself into the self-conscious larger previous self he seems so desperate to escape.

While most one-person shows add a trivial gimmick, set piece or costume, the weights Taylor Olsen wears and sheds to tell the story of his weight loss make a profound thud on the ground when he tosses them off as he sheds the pounds, reminding the audience that every push up, every lunge is a real physical strain and not just staged breathlessness.

His journey is not just about the physical weight, but also the heavy burden of finding self-love that all people must learn to find in themselves, and is a struggle he adeptly conveys.

Olsen points out in the program that this is a workshop production, with a full production to come in the late fall and indeed some choices could be tightened up, but hopefully any finessing to the over-all show avoids upsetting the vulnerability shown in this production. —Ian Mullan 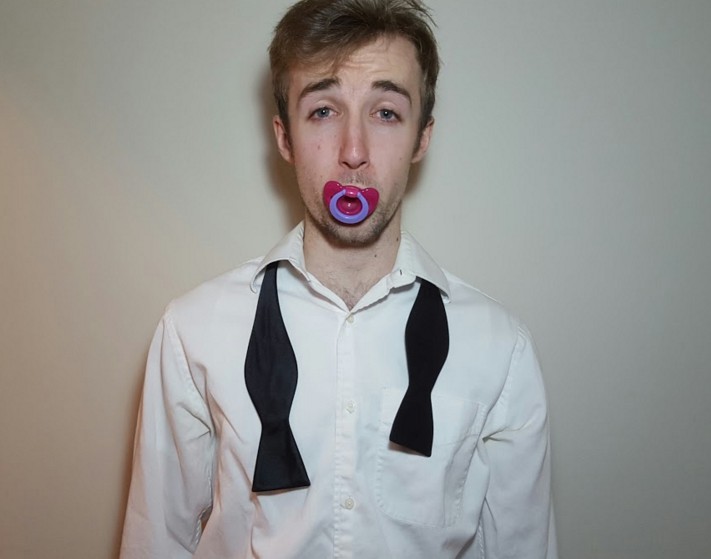 I Guess Last Night
written and performed by Michael Toner

Jude is hungover (but remarkably stubble-free; the growth on his chin in the press photo is absent on stage)* and not getting laid but at least his phone is charged; that way he gets to ignore a pile of calls. Jude's been a drunk guest at this wedding and a drunk best man at that wedding, coast to coast. He's enamoured of 151 proof rum (which the rest of us know is good only for lighting shit on fire) and bummed about being in his 20s; racking up Tinder charges and ordering room service.
Michael Toner's solo show shows off his adept physical acting. Much of the audience seemed to think it was funny but the old and cranky among them just wanted Jude to sober up and get a life.—JK
* Spencer Tracy was famous for being able to act unshaven; Toner is a bit young to try that trick.

Best four bucks you could spend.

I come out of Bud Hunter's solo show feeling like I've just seen a movie – the imagery and story telling are that vivid. At the same time, the murmurs are true: it's rough. But good rough, twinkly rough, diamond in the rough stuff. He has no director, no dramaturge, no stage manager, no lighting designer. It's all him. He seems alone but not lonely. As Saint Gandalf said, not all who wander are lost.

I met Bud Hunter last week, got to sit down and talk with him and write about it. But I feel like the truer Bud Hunter is on the stage, reincarnated as Guevara. I feel I learn more about him when he isn't him at all.

The story of how Che Guervara comes to be concussed on the Bicentennial Highway has a lot of twists and turns and side roads and dark alleys. The jist of it may be that Che Guevara is shot nine times and then pumped full of pain killers by the Bolivians and is transported to a place (possibly a Holiday Inn or a residential facility for folks who are on medication that doesn't quite do it for them) with men in white coats who all look exactly like Ricardo Montalbán. At the same time, possibly in a parallel universe, Bud Hunter is in his car learning Spanish before he attends his nephew's wedding in Cuba.

Along the way there's plenty of good, sensible wisdom: Make a couple of car changes on the way to your secret hideout. (Now that right there is good advice for anyone.) Getting shot multiple times hurts like a bitch.

Hunter must have an incredibly rich interior life. On the road of life Bud Hunter is taking the scenic route. It's a gift, the part of it he shares with the rest of us. —JK


Behind the Curtain: Fringe HQ 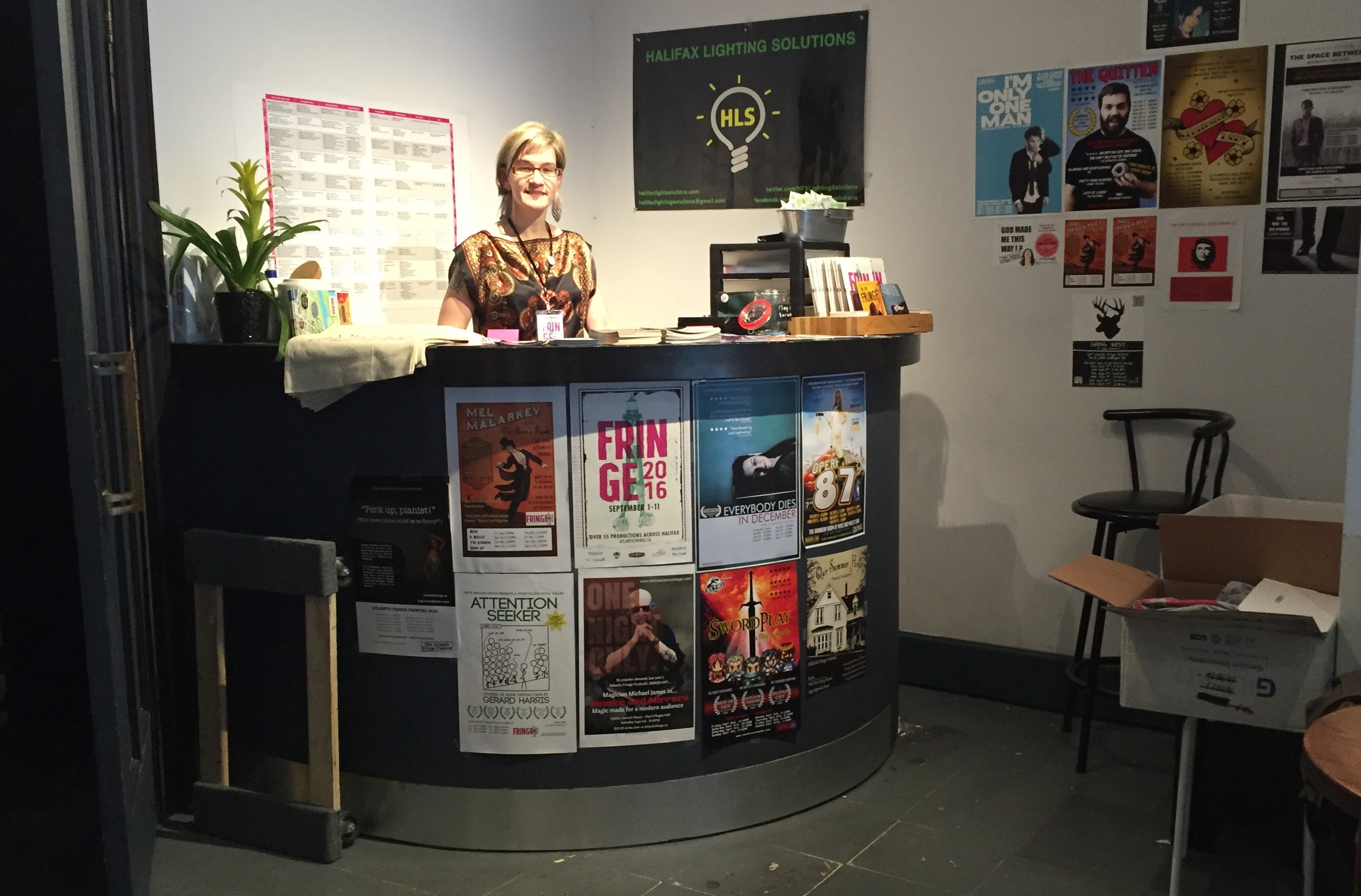 Hugo Dann's My First Last Waltz or The Queer Ages begins with an introduction that lets the audience know that this show is still being crafted, still "a work in progress" with Dann holding his pages, sometimes glancing down, and occasionally putting them down entirely when the story comes to him naturally. These moments of natural story-telling are the core strength of the show. While the AIDS crisis robbed the gay community of our history, Hugo's personal stories feel special.

Stepping back into childhood Hugo plays his younger self perfectly with an obsession with facts that only the very young seem to dwell on, rattling off names and observations of his family which eventually lead us to formative discoveries about his father and sister. His teenage years in Montreal bars utilizes The Company House itself as the stand-in for those places he frequented before the story takes us to Toronto where he marched in his first pride parade.

If anything, the show races along too quickly, unusual for a man who I know enjoys to talk. His final character piece of a gay married Russian man pressed by his husband to talk on the "evils of marijuana" seems like it is from a whole different show and left the central story of his life, without closure for the audience.

Hugo's final words about the pull between assimilation and liberation in the queer community and mimicking straight institutions when perhaps we should be creating our own queer composites is a strong message, and one I hope he weaves through the story as he continues with creating this piece. —Ian Mullan 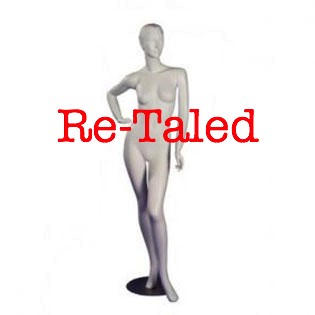 Re-Taled written and performed by Katerina Bakolias and directed by Sansom Marchand is about the horrors of working a consumer-focussed retail job. Although a one-person show, Bakolias utilizes a mannequin as her co-star so frequently, as Catherine the wisdom spouting co-leader on training day, or the new scared 16 year-old co-worker, that perhaps the Fringe should consider an award for best inanimate stand-in this year.

Anyone who has worked any consumer-based job will find this show instantly relatable. Bakolias's boisterous personality makes you feel like you are being let in on industry secrets, back-door discussions of how men timidly shop for women's underwear, or how co-workers let loose. The easy tone of the show at times feels slightly unfinished, but Bakolias's rich characterizations and willingness to casually break the fourth wall to make off-hand remarks will win you over and left me wanting more gossip from behind the counter. —Ian Mullan 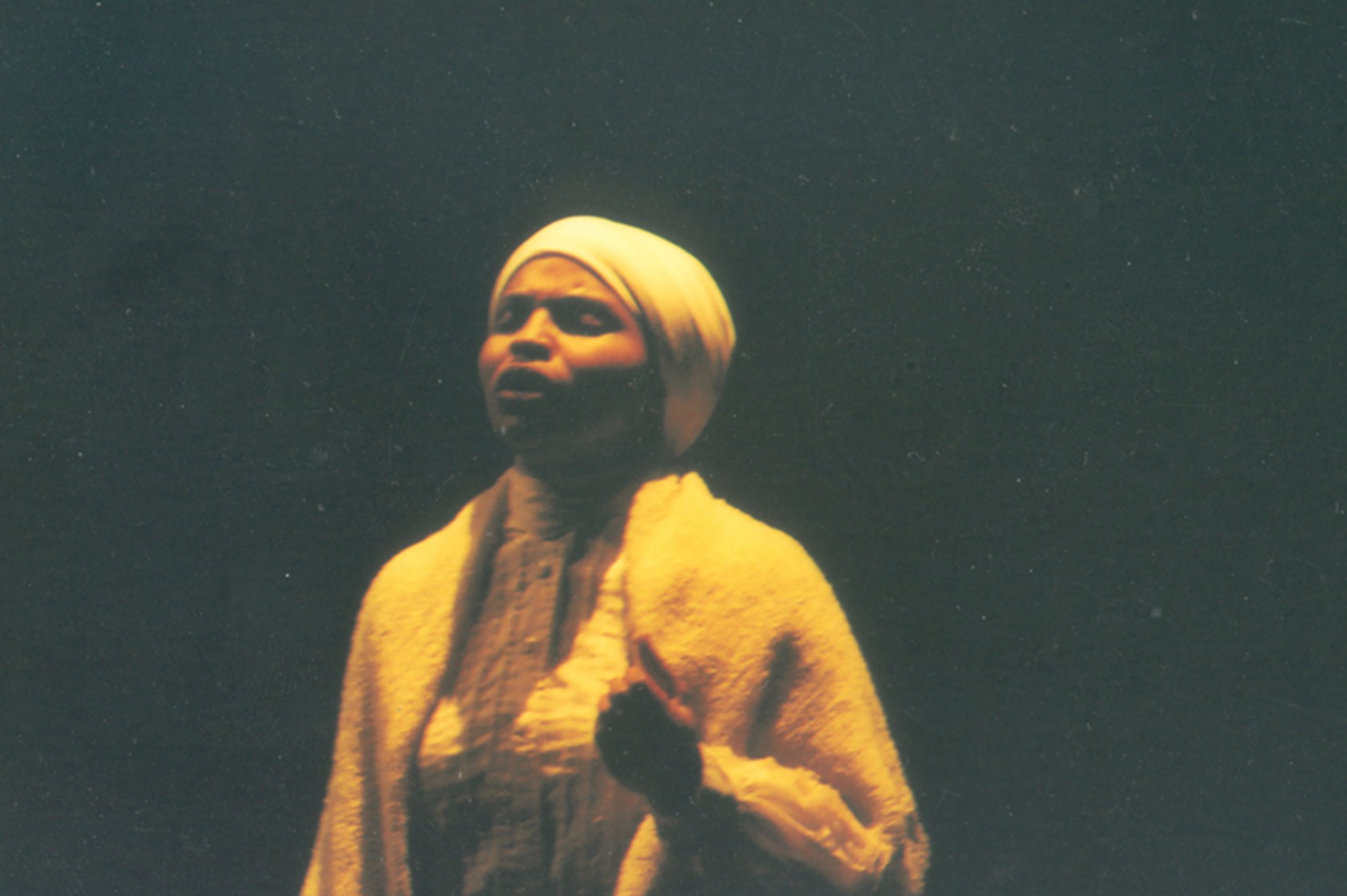 Voices Black Theatre Ensemble, whose Once: Africville Stories was one of the highlights of last year's fringe, returns with another anthology of stories and song. Once more the Ensemble shows that both its source material—the often neglected history of Black people in Nova Scotia—and its stable of talent are nigh inexhaustible.

The first performer is 89-year-old Wanda Robson, the youngest sister of Nova Scotia civil rights icon Viola Desmond. While any 89-year-old with a good memory would arguably be a reliable, or at least interesting, source of historical knowledge, what's remarkable is Robson's sheer talent as a storyteller. Her first tale, about two things her mother loved, poetry and Clark Gable, is vividly told with a carefully construction that highlights rich family humour while also conveying a deeply felt sense of history.

A similar vein runs through the equally talented performance of Nathan Simmons, with his story of the Marble Mountain Maxwells—twin brothers, one of whom was the inspiration for the Gaelic-speaking cook in Kipling's Captains Courageous.

Vetty Thomas tells a riotous story of the thanksgiving celebration of her large family. Director Woods finishes the show with a poem based on the stream-of-consciousness thoughts of an older family friend, a woman who "had walked everywhere." It's in this harrowing piece that the strongest connection to the damage caused by the racism at the heart of North American history is made.

This entwining of family stories with the broader history of Black people in Nova Scotia, and by extension, North America, is Voices' hallmark. Director Woods has for decades been engaged in a mission to bring these stories to a wider audience, to save them from loss or erasure. We live, after all, in a world where a late-night comedian can get a laugh by declaring Drake "the only Black person in Canada."

The opening night performance differed sharply from what was printed both in the Fringe guide and in the play's own handouts. Afterwards, Woods said that a technical rehearsal had shown that the planned performance would take too long ("several days" as he jokingly put it) and so many of the promised stories had been jettisoned. (On the plus side, Woods hinted that this may mean that the content would vary from performance to performance, as stories left out one night could be included in the next.)

Woods' usual method of cobbling together a show by calling upon his stable of talented performers for individual contributions, however, is ultimately less successful here than it was in Once. Whereas Once linked these contributions together with a shared theme and loose chronology, Speaking has no clearly defined structure and therefore, despite the talent on display, seems less focused and is not as powerful. (The play, quite frankly, does not seem quite finished; subsequent performances could be substantially different.)

Even given that comparison, however, Speaking in Tongues should be part of your Fringe experience this year. Robson's performance is worth the price of admission alone. —Martin Wallace 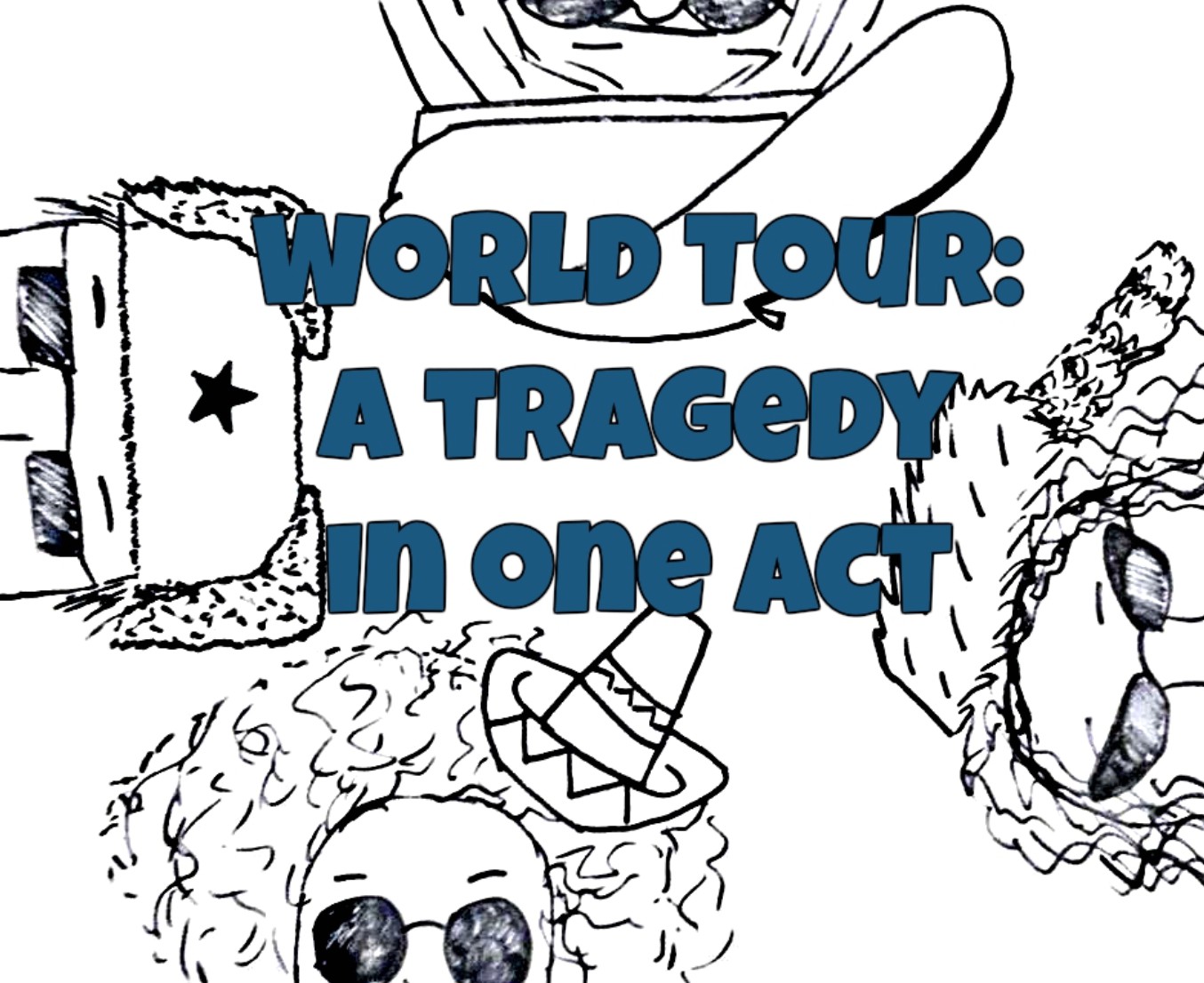 There are several fun moments, such as a re-enactment of the Justin Trudeau elbowgate incident sung to the tune of The Lion King, as well as a performance of Miley Cyrus's Wrecking Ball played on most school children's first instrument: the recorder.

The show is silly with the energy of a college comedy night where the raw talent is still being honed but makes for a fun evening nonetheless. —Ian Mullan