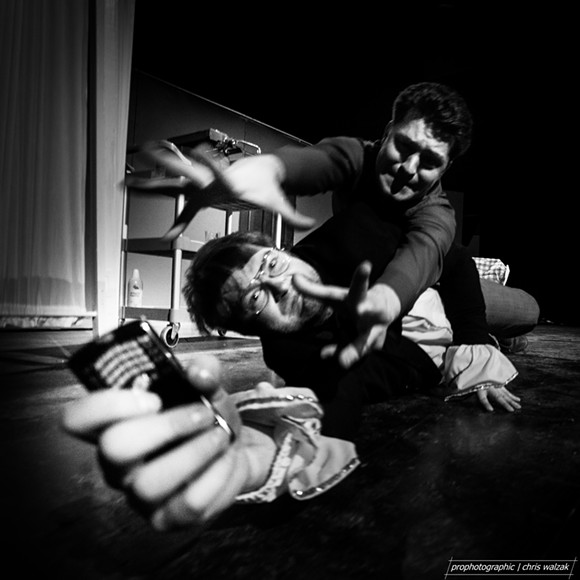 Is comedy something engrained into us at birth? Is it derived from observational wit? Finding light in tragedy? Is it The Funniest Man Alive taken as a comedic prisoner by the Most Pathetic Man Who Ever Existed? I’m inclined to think the latter. As of now, the comedy bar has been set for Fringe by this demented piece of gold slathered in whipped cream and chloroform. Kidnapping over a whimsical dinner-breakfast has never been so good.

Nicholas Porteous’ FMA/Pat is spite and hellfire, speaking with unapologetic sardonicism. Hillary Scott, (The Saddest Girl in the World) believes she’s the black angel of death. She self-destructs beautifully, asserting love and death are synonymous. As more is revealed, she might be onto something. The scene-stealing Wesley Colford takes the show to another level as Pat’s pathetic kidnapper Duncan. He is oblivious to his own obtuseness and his rapid-fire dialogue with Porteous regarding the nature of true comedy is comic beauty.

Punch-Up succeeds thanks to its unprecedented script and expert execution. It expertly blends elements of Stephen King’s Misery and Rostand’s Cyrano de Bergerac, while turning revered comedy acts like Abbot & Costello on its head. It allows for introspection and examines the motives behind why people do things to those they care about. That is talent. That is Fringe-level insanity demanding to be seen.

In the show’s opening moment, it’s warned, “Things can get complicated.” It’s a mantra this show swears by and it’s also a very apt one. Depression has some way affected each person individually, so its onstage treatment requires tact. For a show that’s promoted as a comedy, it’s handled with the respect it deserves.

Red Fish is that inside voice you can’t shake. It is your best friend and your worst enemy and the show finds the perfect fish in James MacLean who relishes the opportunity to dive headfirst into this dynamic role. Costars/writers Rachel Hastings and Taylor Olson tenderly emit first hand experience, endowing their characters with the very conflict they themselves have known intimately. Olson confesses Red Fish “[makes him] feel everything and nothing].” Red Fish is insecurity personified. A security blanket for the hardness of life, but also a wall blocking out good things. He is the builder and destroyer of worlds. While the show flirts with crossing the line into an After School Special, MacLean reels us back in from the cliché and makes it something worthwhile.

For both good and bad, Red Fish wears its heart on its sleeve and it works best when looked at through the eyes of its intended younger audience. Red Fish still admits it’s coming into its own, but there’s no denying it has sole… or soul… whatever you want to call it.

Taboo theatre remains committed to reproducing the experience of attending Grand Guignol in early Twentieth Century France. As in previous iterations of Taboo’s horror anthology series, Double Bill utilizes a framing device whereby a host or hostess (here played by Andrea Dymond with palpable relish) welcomes us to the theatre and prepares us for the frights to come.

The first play, “A Terrible Misstep,” is less a horror story than a witty and cheerfully morbid comedy of manners. Assisted by the actors’ precise timing and delivery, the black humour of the dialogue remains funny right up to and including the play’s literal last moment.

The second, and slightly less successful, play, “How’d You Get Those Eyes?” is a more traditional Grand Guignol offering, containing bloody knife fights and graphic enucleations (look it up if you dare). The staging is particularly effective, allowing us to feel repulsion at what we only half-glimpse.

In an age when “horror” usually means watching CGI gore in a darkened movie theatre, there’s something wonderfully enticing and visceral about Taboo Theatre’s revival of Grand Guignol. I, for one, would be in favour of even longer anthologies. It would be a hell of a night out.

Gillian English performs her solo show in an ill-fitting wedding dress that, she says, fit her perfectly when she bought it some 8 years ago. English has developed a winning, gruff stage persona. She tosses back some cans of beer as she recounts episodes from her early life, painting herself as a control-freak debate team student who would stop at nothing to get what she wants, including true love. English jokingly assures us of the gap between her younger, insufferably foolish self and the wiser, more full-figured woman she has become today. Beginning as a girl so hell-bent on romantic conquest that she buys her ideal off-white wedding dress despite her glaring lack of of a fiancé, she shares comic episodes from her personal life and acting career including roles in Chekhov’s Three Sisters and her stint as the most infamous of Casino Nova Scotia’s showgirls. This rough-hewn journey from self-delusion toward self-respect has a conversational tone and informal pacing which will likely change with every new audience. Her hour upon stage, or upon a milk crate in this particular case, goes by breezily, and charmingly enough to make me want to see more of her.

As a perusal of the performers’ bios confirms, the structure and conventions of Divine Intervention seem to come primarily from “dinner theatre.” While the play contains some of the best elements of that genre—engaging performers, enlivening music—it also contains much of its worst. Basement-level puns, awkward flirting with the audience, “topical” references (Facebook! Candy Crush! George W. Bush (?)!)—they’re all here in spades.

The main conceit of the play is a debate between Apollo and Dionysus and the differing ways of life (intellectual versus creative) that each represents. This theme plays out in the life story of Sophie, interspersed with historical figures who add their perspectives to the debate. Sophie’s story, however, is too brief and disjointed to have any real dramatic weight, and the play’s conception of the historical figures doesn’t rise much above what one could glean from their Wikipedia entries. (Particularly clumsy is the introduction of Beethoven through a series of deaf jokes.)

The songs, whose lyrics come from such venerable sources as Shakespeare, Rilke, and Aleister Crowley, are well-crafted and wonderfully performed. It’s too bad the four (!) authors of the book couldn’t have come up with a more effective way to join them all together.

The first Atlantic Fringe show I ever saw was a performance by dancers from Serpentine Studios. I remember being enchanted by the glittery costumes, impressed by the feats of physicality and entertained by the elegant, exotic dances.

The show is a series of dance numbers that include bellydance, burlesque, hula hoop and performance art. The bellydances are performed by a combination of students (some more experienced than others) and instructors. The result is inspirational. There’s a sense that bellydance, in particular, is something that can be enjoyed and shared by dancers at various stages of learning. There is also a very body-positive message: Spellbound shines the spotlight on women from a variety of shapes and sizes. They are all fit and fabulous.

The evening is filled with stunning moments and movements that drew audible gasps or spontaneous applause from the audience.

The Paul O’Regan Hall at the Central Library makes an excellent stage for dance, and with the loss of DanSpace, I hope that it will become a go-to venue for local dance companies.

How To Speak Swiss

Up to last night, it became apparent as to how little I knew about the geographic enigma that is Switzerland. As presenter Ned Petrie states, it’s the world’s best kept secret- and he’s right. In sixty minutes, the affable Petrie recounts his Swiss experience with the same casual demeanour one would have with a buddy at the bar. The result is an entertaining “The More You Know” information session.

Petrie recounts with aplomb and grace- a hard thing to have done for a man who accidentally crapped his pants, while at the time being able to communicate like a Swiss toddler. At no point does he bash Swiss tradition and he asserts that the Swiss are a kind if insular people. That’s what makes this experience worthwhile. While Petrie would benefit from more pacing, it’s definitely worth adding to your Fringe schedule. You will learn something.